How often do you think deeply about the products around you? How about those you owned five years ago? Ten? The Cicada — brainchild of [Daniel Kerris] — is an art piece that aims to have the observer reflect on consumer culture, buyer’s remorse, and wanting what we cannot have.

The Cicada consists of an ultrasonic sensor feeding data to a Raspberry pi which — calculating the distance of an approaching human — either speeds up or slows down a servo motor connected to a General Electric Walkman’s cassette speed potentiometer. Upon detecting someone approaching, The Cicada begins to loop the chorus of Celine Dion’s “I Will Always Love You”. As you move closer, the tape speed slows, and there is a transition from love at first sight to nightmarish drawl as the music slows. 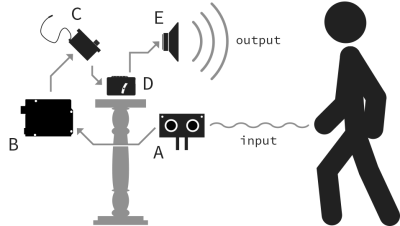 Of course as you leave, it begins to play at normal speed again. [Kerris] hopes this will induce the observer to reflect on wanting what we can’t have — especially if it’s the ‘greener’ grass on the other side of the fence — but also about the media we consume: how we view it, how that initial state changes over time, and — at the very least — how to recycle old tech into new projects!

If you’re looking for more tech-art, The Cicada would be at home in this creepy mechanical art show.

18 thoughts on “The Cicada: A Parasite Art Piece With Commitment Issues”