What are the evocative sounds and smells of your childhood? The sensations that you didn’t notice at the time but which take you back immediately? For me one of them is the slight smell of phenolic resin from an older piece of consumer electronics that has warmed up; it immediately has me sitting cross-legged on our living room carpet, circa 1975.

That phenolic smell has gone from our modern electronics, not only because modern enclosures are made from ABS and other more modern plastics, but because the electronics they contain no longer get so hot. Our LCD TV for instance nowadays uses only 50 watts, while its 1970s CRT predecessor would have used several hundred. Before the 1970s you would not find many household appliances that used less than 100 watts, but if you take stock of modern electrical appliances, few use more than that. Outside the white goods in your kitchen and any electric heaters or hair dryers you may own, your appliances today are low-powered. Even your lighting is rapidly being taken over by LEDs, which are at their heart low-voltage devices.

There are many small technological advancements that have contributed to this change over the decades. Switch-mode power supplies, LCD displays, large-scale integration, class D audio and of course the demise of the thermionic tube, to name but a few. The result is often that the appliance itself runs from a low voltage. Where once you would have had a pile of mains plugs competing for your sockets, now you will have an equivalent pile of wall-wart power supplies. Even those appliances with a mains cord will probably still contain a switch-mode power supply inside.

Mains electricity first appeared in the homes of the very rich at some point near the end of the nineteenth century. Over time it evolved from a multitude of different voltages supplied as AC or DC, to the AC standards we know today. Broadly, near to 120 V at 60 Hz AC in the Americas, near to 230 V at 50 Hz AC in most other places. There are several reasons why high-voltage AC has become the electrical distribution medium of choice, but chief among them are ease of generation and resistance to losses in transmission. 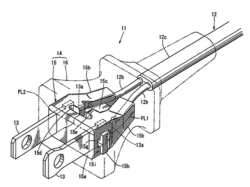 The original use for this high-voltage mains power was in providing bright electric lighting, which must have seemed magical to Victorians accustomed to oil lamps and gas light. Over the years as electrical appliances were invented there evolved the mains wiring and domestic connectors we’re all used to, and thereafter all mains-powered appliances followed those standards.

So here we are, over a hundred years later, with both 21st century power conversion technology, and low power, low voltage appliances, yet we’re still using what are essentially 19th-century power outlets. Excuse me for a minute, I need to hire a man to walk in front of my horseless carriage with a red flag — I’m off to secure some banging tunes for my phonograph.

Given that so many of the devices we use these days have a low power consumption and accept a low voltage, surely it’s time to evolve a standard for low voltage power distribution in the home? Not to supplant the need for mains sockets entirely, after all there are times when 3 KW on tap is quite handy, but to do away with the need for all those power cubes and maybe allow the use of other low voltage sources if you have them. Does it still makes sense to send the power to our houses the 19th century way?

There will be some among you who will rush to point out that the last thing we need is Yet Another Connector System. And you’d be right, with decades of development time behind them you’d think that the connector industry would already have something for low voltage and medium power in their catalogue. The IEC60309 standard, so-called CEE-form connectors, for example has a variant for 24 V or below. Or there are connectors based on the familiar XLR series that could be pressed into service in this application. You might even be positioning USB C for the role.

Sadly there are no candidates that fit the bill perfectly. Those low-voltage CEE-forms for example are bulky, expensive, and difficult to source. And the many variants of XLR already have plenty of uses which shouldn’t be confused with one delivering power, so that’s a non-starter. USB C meanwhile requires active cables, sockets, and devices, sacrificing any pretence of simplicity. Clearly something else is required.

Oddly enough, we do have a couple of established standards for low voltage power sockets. Or maybe I should say de facto standards, because neither of them is laid down for the purpose or indeed is even a good fit for it. They have just evolved through need and availability of outlets, rather than necessarily being a good solution.

The USB A socket is our first existing standard. It’s a data port rather than a power supply, but it can supply 10W of power as 5V at 2A, so it has evolved a separate existence as a power connector. You can find it on wall warts, in wall sockets, on aeroplane seats, trains, cars, and a whole host of other places. And in turn there are a ton of USB-powered accessories for when you aren’t just using it to charge your phone, some of which aren’t useless novelties. It’s even spawned a portable power revolution, with lithium-ion battery packs sporting USB connectors as power distribution points. But 10 W is a paltry amount for more than the kind of portable devices you are used to using it with, and though the connector is fairly reliable, it’s hardly the most convenient.

Our other existing standard is the car accessory socket. 120 W of power from 12 V at 10 A is a more useful prospect, but the connector itself is something of a disaster. It evolved from the cigarette lighter that used to be standard equipment in cars, so it was never designed as a general purpose connector. The popularity of this connector only stems from there being no alternative way to access in-car power, and with its huge barrel it is hardly convenient. About all that can be said for it is that a car accessory plug has enough space inside it to house some electronics, making some of its appliances almost self-contained.

So having torn to pieces the inadequate state of existing low voltage connectors, what would I suggest as my solution? Given a blank sheet, how would I distribute low voltage?

First, it’s important to specify voltages and currents, and thus look at the power level. Where this is being written the wiring regulations do not apply to voltages under 50 V, so that sets our upper voltage limit. And while it’s tempting to pick a voltage near the top of that limit it also makes sense to stay with one more likely to be useful without further conversion. So while part of me would go straight for 48 V I’d instead remain with the familiar 12 V.

Looking at our existing 12 V standard, the car accessory socket delivers 120 W, that should be enough for the majority of low voltage lighting and appliances. So 12 V at 10 A per socket is a reasonable compromise even if the car socket isn’t. We thus need to find a more acceptable socket, and given that a maximum of 10 A isn’t a huge current, it shouldn’t be too difficult to imagine one. If I had a plug and socket manufacturer at my disposal and I was prepared to disregard the XKCD cartoon above I’d start with a fairly conventional set of pins not unlike the CEE-form connector above but without the industrial ruggedisation, and incorporate a fuse to protect the appliance cable from fire. Those British BS1363, fused-mains-plug habits die hard. In the socket surround I’d probably also incorporate a 5 V regulator for a USB outlet.

A socket is all very well, but no use without a supply and cabling. Off-grid self-sufficiency enthusiasts will no doubt have a lead-acid battery or two and a bank of solar panels, but the majority of us would be more likely to hook our low-voltage socket to a switch-mode PSU running from our AC mains. An ATX PSU might struggle to supply more than one socket taking the full 12 V at 10 A, but would be a good place to start.

We do not however want to replace a load of wall warts with a load of switch mode PSU boxes. The point of the sockets described here is to take away other paraphernalia, not to just deliver power. Clearly some form of cabling is required. At this point there has to be a consideration of topology, will there be one cable per socket, and if not how many sockets will go on one cable? If the former then 16 A insulated flex from our distribution point with a single 10 A fuse per cable would suffice with enough margin to allow for sensible cable runs, while if the latter then something more substantial would be required. There are flexible insulated copper busbar products from the domestic low voltage lighting industry that would suffice, for example.

This has been an epic rant, a personal manifesto if you will, for a future with slightly safer and more convenient power outlets. Somehow I don’t expect to see a low-voltage home distribution system like this emerge any time soon, though I can keep hoping.

Your vision for low-voltage power distribution may differ from mine, for example it may include some smart element which I have eschewed. You might even be a mains-voltage enthusiast. Please let us know in the comments.

185 thoughts on “So Where’s My Low Voltage DC Wall Socket?”