If you are reading this, it is a fair bet you like to take things apart. Sometimes, you even put them back together. There are two bad moments that can occur when you do this. First, when you get done and there is some stuff left over. That’s usually not good. The other problem is when you are trying to find some little tiny bolt and a washer and you can’t find it. SMD parts are especially easy to lose.

A few months ago, I was browsing through a local store and I saw a  neat idea. It was basically a small whiteboard with lines dividing it into cells. It was magnetic and the idea is you’d put your small loose (and ferrous) parts like screws, bolts, nuts, and resistors on the board. Since it was a marker board, you could make notes about what each cell contained. Great idea! But the thing was about $20 and I thought I could do better than that. As you might guess from the picture, I was successful. I spent about $5, although I had some rare-earth magnets hanging around. If you don’t, strong magnets aren’t that expensive and you can often raid them out of hard drives.

My first attempt was a failure. I went to a local discount store and looked at the cheap whiteboards. Here’s what I found out. What they sell as “magnetic” whiteboards are boards that will hold a magnet. By themselves, they aren’t magnetic. Luckily, I had brought a small bolt into the store to test, so I didn’t buy one and I sort of forgot about it for a few months. 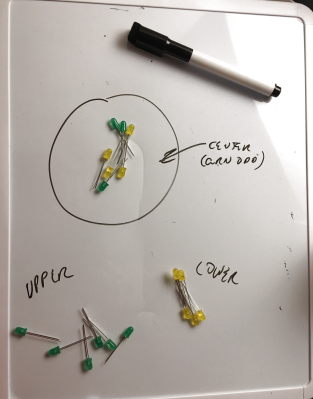 Recently, however, I was about to disassemble something and realized I really wanted something like this to get organized. A trip to the local drugstore netted me a $5 whiteboard with a little marker that attaches with a clip or with a magnet. The thing also came with some sticky tape, some magnetic tape, and a few little weak magnets to grip on it.

How you get to the whiteboard surface will probably depend on exactly what you buy. On mine, the frame pulled apart easily at one corner and I just slipped everything out. Be careful, though, because the inner cardboard was glued to the whiteboard surface, I did manage to bend the thin metal surface when I pulled it out. It wasn’t bad though, and it is so thin, it mostly bent back out.

Once you have the metal exposed, you can mount magnets on the back and they’ll stick. You could probably also use some magnetic tape (the sticky kind, not the old computer or audio kind). Then you just have to put the cardboard back and reassemble the frame. In my case, I cut up one piece of the cardboard to make shims that went around the edges to hold in the other piece of cardboard. I didn’t think the whole sandwich would go back in with the thickness of the magnets. I used several different kinds, but if I had stuck to the thin ones, that might not have been a problem.

After I was done, I made the mistake of looking on eBay. If you don’t mind shipping them from around them globe, you can get the $20 pad for about $5 anyway. However, what fun is that? With this method, you can make as big or small of a mat as you want. You can customize it as you like, too. I thought about using a dual whiteboard/corkboard so you could stick components into the cork or use pushpins to hold things in bags. Anyway, if being able to buy something means that you’re not allowed to build it, Hackaday would have a lot fewer articles.

Even though we don’t think magnets cure arthritis, we do think they are a little bit magic. Some people even use them to avoid being groped in the shower (assuming, of course, you think that’s a bad thing). Now, I only have to figure out why I have these two extra M3 bolts.

36 thoughts on “Hack A Whiteboard And Never Lose Screws Again”