The circuit shown below is a fun one, especially if you’ve played with crystal radios. It receives Morse code that’s transmitted as bursts of radio waves at a specific frequency. The transmission back then was done using a spark gap transmitter. A dot is a short period of transmission at that frequency and a dash is a longer period of transmission. In between the dots and dashes, nothing is transmitted. This circuit decodes those dots and dashes and records them as indents tapped onto a paper tape. A dot results in one, or only a few indents, and a dash results in more indents. The tape is moved at a constant rate, and so the dots and dashes are spaced out by lengths of tape with no indents.

Across the top is the antenna. The wire descending from the antenna goes to the parallel LC resonant circuit consisting of a coil and a variable capacitor, CV. Together they tune in to the desired frequency. To the right and in parallel with that are coherer A and relay R. 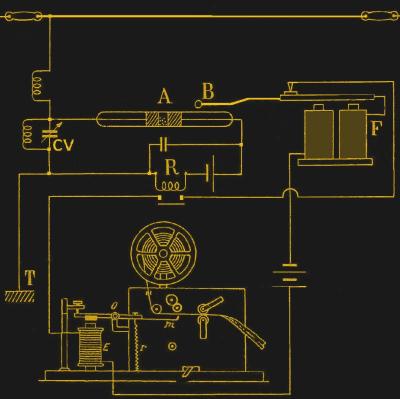 That switch activates the circuit that consists of the two solenoids F, the solenoid E and a battery along the wire between E and F. That causes solenoid E to become energized and to attract the slug of metal on the arm that pivots at O, pushing the right side of the arm upward and tapping an indent into the tape.

Once the mark is made, solenoid E is remains energized, somehow it has to become de-energized. That won’t happen as long as the coherer is conductive, and that’s where solenoids F play a part.

When relay R closes its switch, energizing solenoid E, it also energizes solenoids F. Solenoids F attract arm B (the “tapper”) downward. That results in two things happening. Part of the circuit goes through a point halfway along arm B, and when it moves downward, contact is broken at that point. The circuit is opened, de-energizing all solenoids, and releasing the marker arm, which is pulled back down by spring r.

The other thing that happens when arm B is attracted downward is that the ball on the leftmost end of arm B taps on the coherer, breaking up the iron filings and returning the coherer to a low or non-conductive state. That also causes relay R to open its switch. So even though arm B relaxes back upward when solenoids F are de-energized, closing the circuit there again, the fact that relay R at the same time opens its switch means the circuit remains open. Needless to say, getting the timing of the two lever arms and the relay just right to make a small dot requires some adjustment.

But we’re not done yet. If a dash is being transmitted then the radio frequency is still being received and the coherer immediately becomes conductive again and the whole process repeats for another tap on the tape. Looking at old tapes, it seems that a dot also causes multiple taps, just not as many as a dash. Any Morse hand knows that a dash is three times longer than a dot. Now you know why.

[Ashish Derhgawen] made both a spark gap transmitter and a receiving circuit much like the above one, complete with a coherer tapping mechanism. But instead of writing the message on a tape, he sends it to a BeagleBone board for interpreting and displaying as English text on a monitor: a fully acceptable modern compromise.

Using A Bell Instead

This next electromechanical circuit is a variation of the previous one and was used by Alexander Stepanovich Popov for detecting approaching lightning storms.

Lightning emits electromagnetic waves of various frequencies. Some of those frequencies, when picked up by the antenna A, cause the filings in the coherer C to cling, making the coherer conductive. That closes the circuit C-L-V-R-L. Doing so energizes the relay R which attracts the arm just above it, closing the contact attached to that arm. That energizes the circuit that includes relay E. And doing that pulls up on the arm that taps the ball against the bell, ringing it.

Why, you might ask, are the two chokes L needed? They’re present because there’s radio frequency noise from the relay contacts. That noise would make the filings in the coherer become conductive. The chokes prevent that noise from getting back to the coherer. 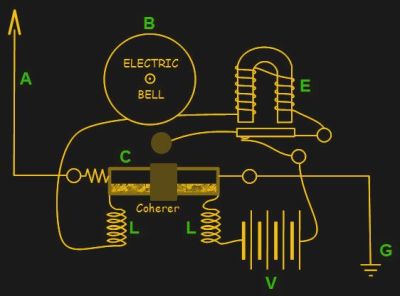 And a bigger question you might ask is why use two relays? Why not have just one as in this modified version? It looks like it would work. The reason Popov added the second relay was that the coherer couldn’t provide enough current to ring the bell itself. So the additional relay allows a circuit that’s independent of the coherer — a sort of mechanical amplifier.

Notice that the diagram shows the use of U-shaped electromagnets for the relays. Presumably that’s to take advantage of both ends of the magnetic field induced in the core. Once I thought about this I realized it was probably why the Morse code receiving circuit above uses two solenoids at F, something I was scratching my head over. The base that they sit on is likely iron, and counts as part of the core, and the way the solenoids are wound likely results in a north pole facing upward for one and a south for the other. The two solenoids and the base likely form the equivalent of a U-shaped electromagnet.

The photo shown here is one of Popov’s machines for ringing a bell when there’s a lightning strike, but it also records the strikes on a chart recorder. We don’t have a circuit for his specific chart recorder but that lead us to look deeper and find a diagram for an old, obsolete electromechanical siphon recorder that looked interesting enough to talk about.

The driving mechanism is a moving coil, like the ones found in analog meters. The coil is suspended between the poles of two magnets. As current moves through the coil it creates a magnetic field that reacts with that from the magnets, causing the coil to rotate a little in the vertical axis. The amount of rotation is proportional to the amount of current.

The coil is attached via threads to a rectangular object that’s mounted such that it’s also free to rotate a little in the vertical axis. As the coil rotates, those threads cause the rectangle to rotate too. A tube is attached to that rectangle, one end of which is in an inkwell, and the other end of which is lower down and faces a moving strip of tape. As ink is deposited on the tape, more ink is siphoned from the inkwell.

And so that’s a fun romp through some old electromechanical circuits. We’d love to hear some of your favorite electromechanisms, or electroanachronisms, and especially any that you’ve either replicated or come up with yourself.