The strangest part of the device is the sleep mode. The voltage regulator is turned on by user button press and held on using a GPIO pin on the CPU. Once the microcontroller lets go of the power supply, all power is off until the button is pressed again. It’s hard to use any less power when sleeping. Even so, the microcontroller monitors the battery voltage and presumably phones home when it gets low. 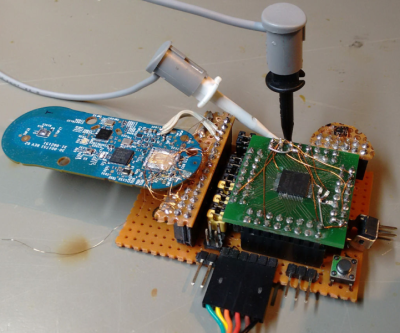 [Hunz] looked at the communication stream, finding HTTP data over SPI between the microcontroller and the WiFi radio chip, and TLS-encrypted HTTPS from there on out. So he soldered in an FPGA to man-in-the-middle attack the hardware, making a beautiful hacker’s development kit out of the $5 gadget.

The old Dash buttons had SWD debugging enabled and a serial console, and the new firmware has it disabled except for a few commands, so it’s not easy to dump. So [Hunz] desoldered the SPI flash and read it externally. That gave him the firmware, minus the bootloader and some configuration storage. Next came a great trick: he wrote the same firmware to a fresh SAMG55, and the firmware worked. The chip he flashed it to had SWD debugging running, however, so he was able to work in a much more friendly environment with developer console and everything. (Brilliant!)

With a firmware dump and a running version of the system under debugging, he eventually found a hole in the audio configuration protocol — which is used to configure the device through an audio file played into the microphone like an updated version of an old-school modem. The input in the audio protocol, unfortunately for Amazon, wasn’t checked for length. Buffer overflow and a complete flash dump ensue. The video of him hacking the button with an earbud is classic.

Amazon will patch this hole sometime soon, of course, but they can’t do so if the button can’t connect to their servers. [Hunz] has said he’s not going to work on it much more, but here’s his GitHub. Have at it!