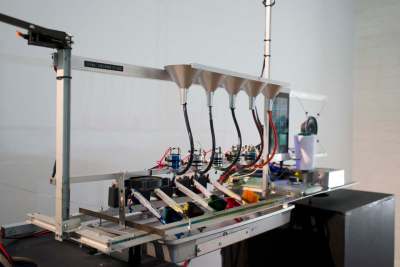 Functionally, Teleknitting receives TV signals and converts them into a one-dimensional thread that slowly ensnares a chosen object. [vtol]’s aim is to reinterpret the data we have beaming all around us into a different medium entirely — a different kind of data stream, if you will.  Teleknitting is perhaps a compelling suggestion that we are — literally — far too wrapped up in the media that surrounds us 24/7 and that sometimes we need to slow down or reduce the amount of data we take in that isn’t useful.

If you’re looking for some more practical knitting hacks, we’ve featured a few knitting projects on Hackaday before — such as this open-source knitting machine, or how to interface with one in order to have it make pixel art.

6 thoughts on “Turning Television Into A Simple Tapestry”