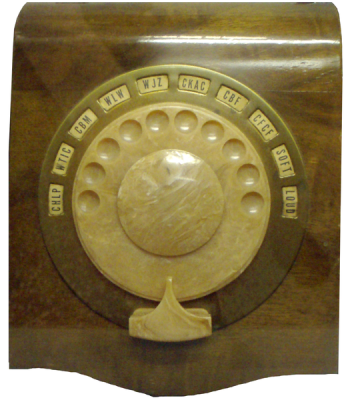 The Mystery Control was several years later than the wired Lazy Bones remote, and didn’t take a piece of furniture to house it (but it did take a big battery). We know you want to tear one apart, and luckily, [batteryman] has done that for us in this video.

Philco was no stranger to remote controls. Their Lazy Bones TVs predated the Mystery Control and used a flat cable under your carpet to connect the radio to the remote housed in another wooden cabinet. They weren’t alone in making wired remotes, either. Zenith introduced the Lazy Bones wired remote for TVs in 1950. 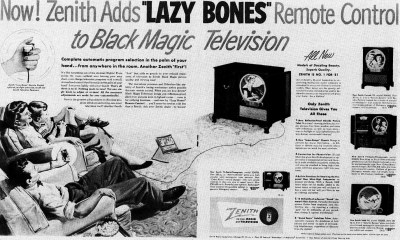 Although customers liked having remote control of their television, they complained that people tripped over the unsightly cable that meandered across the living room floor.

Zenith engineer [Eugene Polley] solved the wire problem in 1955. His Flashmatic system used four light sensors at the corners of the TV. By hitting a sensor with some light you could change the channel up and down, turn the TV off, or mute the audio and, presumably, unmute it.

The only problem was the light sensors would respond to any light. So if the sun came in your window at the right time of day, it might turn your TV off. However, people loved it and Zenith had to apologize to customers for not having enough product to fill demand.

In 1956, Zenith rolled out its Space Command remote. This used audio frequency instead of light. But it probably didn’t work the way you’d imagine. When you pressed a key, a hammer struck an aluminum rod producing a particular frequency the receiver picked up. This meant the remote didn’t need any batteries, which is clever. Zenith’s marketing department feared that people would think their TV was broken if the remote batteries died. 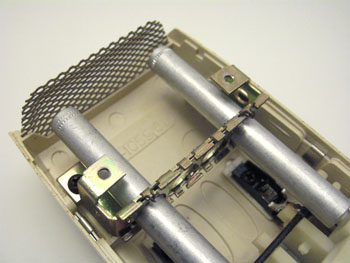 You can see the rods inside. Each rod is a slightly different length, around 2.5 inches overall, and if you guessed that means the remote has two buttons, you are right. You could change the channel down or cycle the volume from high to low and back again. Remember, back then you only had 12 channels to flip through, and probably only two or three with anything other than snow on them.

You have to keep in mind what the electronics looked like in 1956. The remote receiver added six tubes to the TV set and raised the price about 30%. Nevertheless, it was a success. People wanted remote control.

It is really entertaining to watch [drh4683] align the receiver for one of these remotes and hear the clicking noise of the aluminum bars being struck. There was even special test gear for aligning the remote receivers.

In the 1960s, solid state technology advanced to the point that the aluminum rods could be replaced with transistor circuits and piezoelectric transducers. This allowed for more buttons, but it did take batteries.

There are stories of people who could hear the remotes and dogs, too. It isn’t hard to imagine that random noises could produce enough energy to trigger some of the remotes too. However, Zenith claims the industry delivered more than nine million ultrasonic remotes over the 25 years they were in use.

The switch to infrared like we have today started in the 1980s with a Canadian company called Viewstar that made cable boxes. We’ve covered how those work many times so we won’t rehash that here. We never could verify that the 38 kHz was due to the frequency of ultrasonic remotes. It looks like frequencies in that range were introduced around the time of the electronic remotes. The aluminum bar remotes appear to operate about one fifth of the frequency. However, even with infrared remotes, there is some variation in carrier frequency.

For example, the NEC protocol specifies a carrier frequency of 38 kHz. Philips RC-5 and RC-6 remotes are supposed to use 36 kHz. However, because many companies used an easy-to-find 455 kHz resonator, frequencies of 37.92 kHz are common. There are other examples of other frequencies including some in the 50-60 kHz range.

One interesting note: the frequency of the IR light is also important. Many remotes use wavelengths of 930–950 nm because the atmosphere absorbs the sun’s IR emissions in that spectrum. That reduces the chances that sunlight would blind the IR receiver.

The universal remote first appeared from Magnavox (which is a Philips brand) in 1985. [Steve Wozniak] of Apple fame started a company, CL9, to sell CORE–a programmable learning remote that failed to catch on. Some say because it was too hard to program.

Even today, it is hard to find that one remote that will control absolutely everything unless you buy something very high-end. There are a few RF remotes that complicate things, and bring us back full circle to the Mystery Controller. New devices and codes appear all the time.

However, there is a growing trend to allow devices to accept control via networked devices like cellphones or tablets. So maybe IR remotes will one day be as peculiar as an ultrasonic one is today.

Next time you cradle that Harmony remote in your hand and search for the next reality show you’ll consume, take a minute to think about the history. That remote has a long line behind it tracing back to [Tesla], [Marconi], and [Lodge].

69 thoughts on “Retrotechtacular: How Old Is The Remote?”