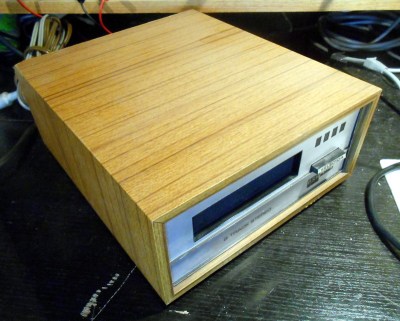 The player itself is about half the size of a normal hi-fi unit, instead of the normal roughly a 19 inch rack size it’s about 9 inches (23 cm) wide and 4.5 inches (11.5 cm) high. The outer case is made from fibreboard covered in stick-on wood-effect vinyl as was the fashion of the day, and the front panel has the cartridge slot and track selector button. On the rear panel is an audio level control and the cables, the audio output is brought to a DIN plug instead of the phonos we’d more commonly find today. There was a period in the 1970s when DIN connectors were where it was at when it came to audio.

Turning the unit over, unscrewing the feet allows the cover to be slid off to reveal the mechanism. A very solid sheet steel chassis is revealed, with a mains-powered shaded pole motor and a belt drive to a substantial cast aluminium flywheel on the pinch roller shaft. The motor is also the mains transformer for the electronics, a characteristic BSR cost-saving trick that you would also have found in record players of the period.

Immediately, an unfortunate side-effect of an ancient piece of equipment became apparent, in the decades since this player was last used the drive belt has softened and turned to a sticky black tar-like substance. This is very common in belts from the 1970s, I’m told it has something to do with how well the rubber was cured. An interlude of picking, rubbing, and scraping with tissue paper ensued, along with my hands getting covered in black gunk before a trip to the sink for a date with some industrial hand cleaner. 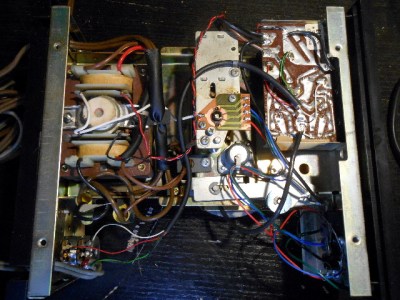 Upon inspection the chassis is revealed to be in two parts held together with self-tapping screws. The front half is the 8-track mechanism, while the rear holds the motor and the circuit board. It’s possible that this is because the same basic mechanism was used in a range of BSR products, though the 8-track format didn’t really take off in the UK it’s likely BSR would have sold this mechanism to other manufacturers in the same way they did for their turntables.

Turning the chassis over, along with the electronics and the motor, we see the business end of an 8-track player, the solenoid and mechanism that allows it to change tracks. There is a cam that is rotated incrementally through four positions by a solenoid, this cam moves the head up and down between the tracks. There are two ways the solenoid can be triggered, either through pressing the selector button on the front of the unit, or by a piece of conductive foil at the join of the tape loop passing a pair of electrical contacts to automatically change tracks. To show the operation of the cam I’ve recorded a video in which the solenoid is actuated with a pair of tweezers and the cam can be seen rotating.

Meanwhile on the other side of the chassis, the head moves up or down by a corresponding amount. Since the width of the tape is only 1/4″ there isn’t much movement, but you can see from the relative positions of the shadows of the head in the two pictures how it moves up between the different tracks. The head itself incorporates two individual heads, one for each channel, as you can see these are spaced about a half-tape-width apart.

On the bottom of the shaft for the cam is a PCB switch with a wiper that traverses four pads, one for each track. This routes power to one of a set of four indicator lights on the front panel that show the currently selected track. The indicator lights are not the LEDs we’d expect today, but tiny incandescent bulbs. An LED was probably a bit too exotic for the early 1970s.

Finally, the preamplifier circuit is a collection of early-1970s discrete components on a typical resin-bonded-paper board of the era. The artwork has obviously been laid out the old-fashioned way using crepe paper on acetate, giving it very much a feeling of its era. Since the unit hasn’t seen power in many decades, it’s quite likely that its electrolytic capacitors  will have deteriorated somewhat.

The impression I came away from this machine with was of how complex it was while simultaneously doing so little. The sheer number of individual assemblies contained within it must have made it quite an expensive device to manufacture, all of which could have contributed to it not being a commercial success here in the UK where it didn’t have the backing of carmakers to put it in new models in the way it did in the USA. It’ll go back into my hi-fi rack, and eventually there will come a point at which people ask “What’s that?” rather than exclaiming with glee because my hi-fi contains an 8-track player.

Before we leave this topic there is a final thing to examine, the 8-track cartridges themselves. They contained a continuous loop of tape wound onto a single one-sided reel, and since the tape thus had to pass over itself as it fed from the centre of the reel they used special lubricated tape with a graphite backing. They could therefore only go forwards, no rewinding was possible. The pinch roller was incorporated into the cartridge, from where it would mate with the capstan in the player. the central opening was where the head met the tape, and that on the left was where the contacts for the tape end foil sensor met the tape.

In a sense the 8-track stereo cartridge was doomed from the moment it was launched, for its nemesis, the compact cassette, had already reached the market. The cassette offered more capacity and the ability to rewind in a smaller package, and did not suffer the 8-track’s problems with head alignment due to the movement on track changes. Over the 1970s the cassette won the battle of the tape cartridge formats, aided by far smaller players incorporated into car radios and eventually into the wildly successful Sony Walkman and similar portable music players. By the 1980s there were still major releases in the format, but by the end of the decade it had faded into history, only being revived as an ocasional gag in movies.

We’ll leave you with another video, this time an advert from a time when an 8-track player was a cool accessory for your car. It’s a bittersweet one, for of course not only has the format passed into history, now also has the store selling it.

43 thoughts on “Retro Teardown: Inside An 8-Track Stereo Player”