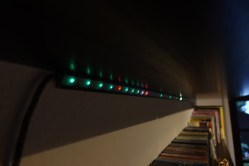 9 thoughts on “A LED Strip Clock As Linear As Time”