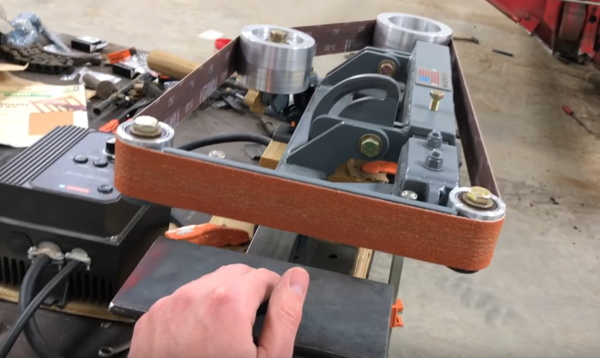 It seems like everyone is building belt grinders these days. You might think [Jeremy Schmidt] is just hoping on the bandwagon, but you’d be wrong. He took a full two years to design the perfect belt grinder for his needs. Now he’s built his perfect beast, and we must say, it’s quite impressive!

[Jeremy] had seen grinders which can tilt, but most of them tilt the entire machine, including the table. He designed his machine with an independent table. This means the belt can be placed at any angle, while the table remains flat. He’s achieved some really interesting finishes with a course grind on a 45-degree angle to the workpiece.

No build is without its problems. In [Jeremy’s] case it was building the box which acts as a receiver for the machine and the tables. Regular square tube stock wasn’t quite rigid enough, so bar stock was the way to go. The first attempt at building the box resulted in a warped tube, due to the stresses of welding. [Jeremy] was more careful the second time, moving from section to section of the four welds. This kept the heat from building up, and the box stayed straight.

The final result is an incredibly rigid machine which definitely will withstand anything that [Jeremy] can throw at it.

If you want to see more belt grinders at work, check out [Bob]’s treadmill belt grinder, or [Mike’s] conversion.

END_OF_DOCUMENT_TOKEN_TO_BE_REPLACED 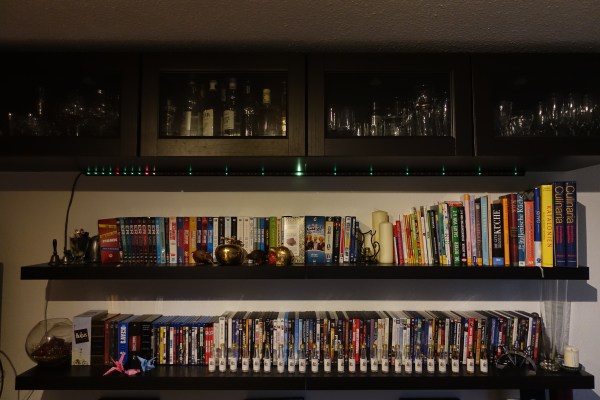 END_OF_DOCUMENT_TOKEN_TO_BE_REPLACED

We’re not sure if this is art, anti-snooping guerilla warfare, or just a cheeky hack, but we do know that we like it! [Jasper van Loenen]’s Linger keeps the SSIDs that your cell phone (for example) spits out whenever it’s not connected to a WiFi network, and replays them after you’re gone.

Some retail stores and other shady characters use MAC addresses and/or the unique collection of SSIDs that your phone submits in probe requests to fingerprint you and track your movement, either through their particular store or across stores that share a tracking provider. Did you know that you were buying into this when you enabled “location services”? Did the tracking firms ask you if that was ok? Of course not. What are you going to do about it?

Linger replays the probe requests of people who have already moved on, making it appear to these systems as if nobody ever leaves. Under the hood, it’s a Raspberry Pi Zero, two WiFi dongles, and some simple Python software that stores probe requests in a database. There’s also a seven-segment display to indicate how many different probe-request profiles Linger has seen. We’re not sure the price point on this device is quite down to “throwie” level, but we’d love to see some of these installed in the local mall.  END_OF_DOCUMENT_TOKEN_TO_BE_REPLACED 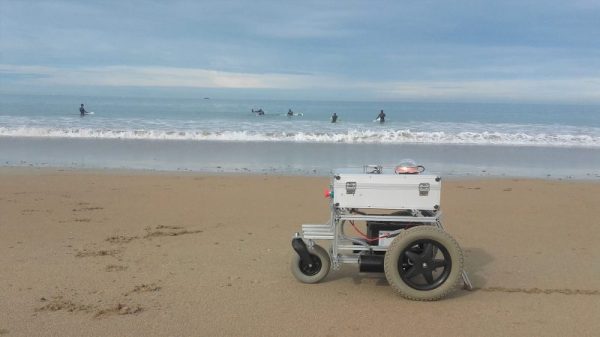 Some people find it hard to look at a huge, flat expanse of floor or ground and not see a canvas. From the outfield grass of a baseball park to some poor farmer’s wheat field, trampling, trimming or painting patterns can present an irresistible temptation. But the larger the canvas the more challenging the composition will be, which is where this autonomous beach-combing art robot comes into play.

Very much still a work in progress, [pablo.odysseus]’ beach bot was built to take advantage of the kilometers-wide beaches left by the receding tides near his home. That immense canvas is begging to be groomed, and this bot is built for the task. The running gear itself is simple – an extruded aluminum chassis powered by wheelchair drives with added optical encoders and dragging a retractable rake  – but the bot is bristling with electronics dedicated to navigation.  A pair of Arduinos run the dual odometers, compass, and a GNSS receiver, as well as providing a smartphone interface for on-the-fly changes. The art is composed as a DXF file converted to latitude and longitude points and exported to Google Earth as a KML. That means the bot can just be brought to the beach and allowed to draw autonomously. An early test run is seen below the break; better “brushes” are in the works.

Watching the art unfold on a beach would be relaxing, like watching a zen garden being created. We’re looking forward to [pablo]’s progress on this one. Of course, art bots aren’t the only autonomous machines that big, wide beaches attract.

END_OF_DOCUMENT_TOKEN_TO_BE_REPLACED 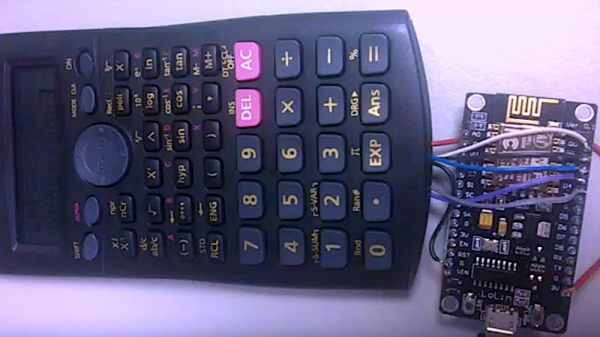 Calculator hacks have been around for a while now and we have seen the most action around the Texas Instruments TI-83 and TI-84. When [johnkimdinh] found a way to add an ESP8266 to a scientific calculator (machine translation) and this time around it’s a Kenko FX-82M calculator which appears eerily similar to the Casio FX-82M.

In his video, [johnkimdinh] demonstrates his hack which has a web interface for transmitting numbers to the calculator. This is accomplished by accessing the keypad using the ESP8266 GPIOs and it is essentially the equivalent of typing remotely. The rest of the circuit remains intact so bit more work and the other functions should be available remotely as well.

Perhaps this hack is best suited as a dedicated display for outputting measurements and other data which requires some type of post-processing to be human readable. If the next iteration delivers the ability to read from the display we’ll really be getting somewhere. We envision such calculators being used as the future of education where the connectivity is used to retrieve an array of real time parameters for assignments. Add a few sensors into the mix and it could be the next big thing for STEM.

In the past, we have had calculators brought to life to do vector and matrix math and ESP8266s connected to TI-84 calculators. After all, everyone has calculators, they simply must be hacked!

END_OF_DOCUMENT_TOKEN_TO_BE_REPLACED

WiFi and Bluetooth have their use cases, but both have certain demands on things like battery life and authentication that make them unsuitable for a lot of low-power use cases. They’re also quite limited in range. There are other standards out there more suitable for low-power and wide area work, and thankfully, LoRa is one of them. Having created some LoRa pagers, [Moser] decided to head out and test their range.

Now, we’ve done range tests before. Often this involves sending one party out with a radio while the other hangs back at base. Cellphones serve as a communications link while the two parties go back and forth, endlessly asking “Is it working now? Hang on, I’ll take a few steps back — what about now?”

It’s a painful way to do a range test. [Moser]’s method is much simpler; set a cellphone to log GPS position, and have the pager attempt to send the same data back to the base station. Then, go out for a drive, and compare the two traces. This method doesn’t just report straight range, either — it can be used to find good and bad spots for radio reception. It’s great when you live in an area full of radio obstructions where simple distance isn’t the only thing affecting your link.

Build details on the pagers are available, and you can learn more about LoRa here. While you’re at it, check out the LoRa tag for more cool builds and hacks.

The Internet of Things, as originally envisioned in papers dating to the early to mid-90s, is a magical concept. Wearable devices would report your location, health stats, and physiological information to a private server. Cameras in your shower would tell your doctor if that mole is getting bigger. Your car would monitor the life of your cabin air filter and buy a new one when the time arrived. Nanobots would become programmable matter, morphing into chairs, houses, and kitchen utensils. A ubiquity of computing would serve humans as an unseen hive mind. It was paradise, delivered by ever smaller computers, sensors, and advanced robotics.

The future didn’t turn out like we planned. While the scientists and engineers responsible for asking how they could make an Internet-connected toaster oven, no one was around to ask why anyone would want that. At least we got a 3Com Audrey out of this deal.

Fast forward to today and we learn [Christopher Hiller] just put his toilet on the Internet. Why is he doing this? Even he doesn’t know, but it does make for a great ‘logs from a toilet’ pun.

The hardware for this device is a Digistump Oak, a neat little Arduino-compatible WiFi-enabled development board. The Digistump Oak is able to publish to the Particle Cloud, and with just five lines of code, [Chris] is able to publish a flush to the Internet. The sensor for this build is a cheap plastic float switch. There are only three components in this build, and one of them is a 4k7 resistor.

Right now, there are a few issues with the build. It’s battery-powered, but that’s only because [Chris]’ toilet isn’t close enough to a wall outlet. There’s a bit of moisture in a bathroom, and clingfilm solves the problem for now, but some silly cone carne would solve that problem the right way. [Chris] also has two toilets, so he’ll need to build another one.