As seen on Hackaday

There seems to be nothing a hackerspace can’t make with a laser cutter, and that now includes skateboard wheels. Munich Maker Lab sent theirs to Braille skateboarding (YouTube) who skate it for a very long while until it finally succumbs.

The Munich CCC hackerspace has the largest flip-dot display I’ve seen in person, and it was running a game of pong, but the details are where it gets cool. It was controlled by r0ket badges from the 28th Chaos Communications Congress, sending RF at 2.4 GHz to the SDR rad1o badges from the 2015 CCCamp, which did all the decoding in GNURadio. How DIY is that?

Not to be outdone on the flip-dot front, the hackerspace from nearby Augsburg got a few panels and through some software trickery achieved stellar smooth animations. Turns out that because of gravity, different pulses are optimal for setting and resetting a bit. The Augsburgers also only update pixels when they change, reducing power consumption. Very clever.

Among other projects from a hackerspace attached to the technical university in Aachen (RWTH) was this impressive vest of vibration motors, intended to help blind people navigate better. Space is mapped intuitively across the 2D matrix, and distance is encoded as vibrational intensity. This would make a good project for the Hackaday Prize.

Flip All the Dots — muCCC

Vibrational Vest for the Blind 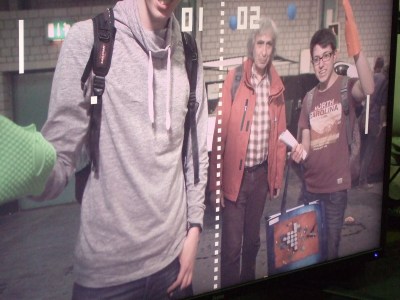 If participation in a DIY fair is any barometer, we may have passed through peak 3D printer, and are entering into an era of neat experimentation with augmented and virtual reality — there was a whole row of goggle-based projects that just don’t come across well in photos. Still, some AR projects had bigger screens, like this game of pong that relied on detecting colored oven mitts, and was a great piece of interaction design.

But I’m a little jaded by the virtual, and more delighted by crazy mechanical contraptions. At two adjacent booths, I saw an amazing violin-playing robot (here it is on YouTube in action) and some functional steampunk art/devices from Skulls N Gears that legitimize the genre, as far as I’m concerned. The printer that went along with this computer is a modified typewriter and was click-clackily printing out Chuck Norris facts in German as we walked by. It was awesome.

Around the corner were some workshops, including kids with lathes (courtesy of Unimat) and a free-for-all of hot glue and junk electronics parts labelled “Post-Apocalyptic Jewelery”. There were printing presses and soldering stations, and generally too much to do.

And then there was the paper-airplane machine gun. Actually, there were three versions on display. Yes, there were paper jams, and [Dieter] had to restrain himself from covering the floor too deep with his flyers (tee-hee!), but watching the machine do its work was fantastic. Check out the linked video in our article.

I’m still scratching my head about the cardboard tube with LEDs and a coconut on the end that was making very interesting noises. The owner of the booth was out having dinner, so I didn’t get to ask exactly what goes on at the “Center for Alternative Coconut Research”.

Which brings us to the Hebocon. [Brian Benchoff] has waxed poetic about Hebocons before, so I don’t need to. The point is that it’s hilarious, inclusive, and freaky in the best possible way. Two lively announcers and an uncounted number of “bots” kept the crowd interested watching crappy robots battle past some of the audience’s bedtime.

Shown here is “Schratte”, a portmanteau word of “junk” and “rat” in German, versus “Monkey with Knife”. Schratte was my favorite because it was the only walker of the evening. I can’t remember the name of the crocodile bot (Croco-something?), but it went on to push all competitors out of the way with its elaborate front shovel: a piece of wood.

Monkey with Knife vs Schratte

So get out there and support your local maker scene! And if you don’t have one, make one. Because, even if you’ve already read about it on Hackaday, there’s nothing like seeing a project in the flesh and chatting with its builder.

8 thoughts on “Make Munich Was Awesome”