Bob Ballard and his team have created a deep sea telepresence exploration system. This system consists of the Exploration Vehicle (E/V) Nautilus operating as the ‘mother ship’ and the Hercules ROV. Nautilus is a surface vessel that sails out to the area of interest and performs all preliminary mapping with onboard sensors. She carries all necessary equipment and personnel. Sensors include a bottom profiler, multi-beam sonar, and other sensors mapping water temperature and various properties. The E/V will scan the bottom to get a coarse map to guide the exploration. 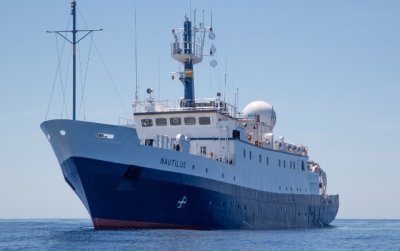 Nautilus also caries satellite communication links allowing her to stream real-time data to the Inner Space Center at the University of Rhode Island. From here, video and communication feeds from the mission are re-broadcast in real-time to research institutions. This is the same feed that is received by the Inner Space Center. Not only that, this feed is also re-broadcast on the web so that anyone can tune in to the action. In other words, you too can become a deep sea explorer from the comfort of your office or home.

Nautilus is unable to acquire optical or high resolution sonar imagery of targets in deep water by herself. She must deploy remotely Operated Vehicles to capture the high-resolution imagery.

To do this, E/V Nautilus lowers two different ROVs into the water. The first one, Argus, is the service ROV who’s job it is to manage the tension on the lead cable from Nautilus and generally tend to the instrumentation ROV called Hercules. In other words, Argus is tethered to Nautilus by a heavy steel cable that also caries data and electrical power. Ship motion from Nautilus can be directly transmitted to Argus via the cable. Argus’s primary job is to provide slack on a lighter-weight tether for the second ROV Hercules can carry out its high precision mission. Argus also contains a lighting system to illuminate the area that Hercules operates and some additional camera equipment to monitor the mission. 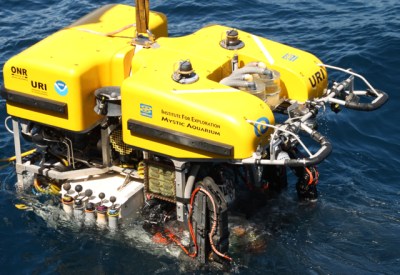 Hercules is tethered to Argus via a lightweight cable containing electrical power, fiber data link, and additional control lines. Hercules is a high stability platform containing high res cameras, powerful lamps, a complex set of maneuvering thrusters, guidance, robotic arms, additional sensors such as imaging SONAR or mission specific sensors requested by scientists. It even has robot arms to grab things and collect samples. Most of the incredible imagery acquired by this system was captured by Hercules.

Bob and his team direct the Nautilus crew from the University of Rhode Island. Nautilus controls Hercules and Argus from the surface. Data is sent up the tether to Argus, from Argus to Nautilus and then from Nautilus via satellite, through the internet, to URI. With servers setup at URI, the mission can be controlled from anywhere in the world. And it can be viewed from anywhere in the world by anyone interested.

A Typical Season of Exploration

Last spring I started to watch the live feed often leaving it playing in the background. Several notable things happened over the season (here’s a 94 episode video list for your enjoyment). A WW2 aircraft carrier that was deliberately destroyed during a 1951 atomic bomb test, was rediscovered and surveyed. Some unusual life forms were discovered discovered like this mysterious purple org. And there were many interactions with creatures from the deep. Below we see a tug-of-war with an octopus while repairing cables on the Ocean Networks Canada underwater observatory:

You can go through the video list posted above to relive what was seen last year. But it’s more fun to see things as they happen. The 2017 schedule has been posted and we’re currently exploring the Channel Islands Marine Sanctuary followed by Central California’s coastline next week and on from there.

Many of us remember that cover of National Geographic where the shipwreck of the Titanic was found. We’ve paged through coffee table books with images of the battleships resting on Iron Bottom Sound. We’ve marveled at how life could possibly exist and even thrive around deep sea geothermal vents. With the Nautilus Live you can join the fun from the comfort of your home, and experience for yourself what the scientists are seeing in real-time.

10 thoughts on “Telepresence Robot 2000 Leagues Under The Sea”