Taking a picture is as simple as tapping a screen. Drawing a memorable scene, even when it’s directly in front of you, is a different skill entirely. So trace it! Well, that’s kind of hard to do without appropriate preparation.

[bobsteaman]’s method is to first whip up a pantograph — it tested well with a felt marker on the end. Next, he built a camera obscura into a small wood box with a matte plexiglass top, which didn’t work quite so well. A magnifying glass above the camera’s pinhole aperture helped, but arduous testing was needed to ensure it was set at perfect position for a clear image. The matte plexiglass was also thrown out and, after some experimentation, replaced with a sheet of semi-transparent baking paper sandwiched between two pieces of clear plexiglass. The result is hard to argue with. 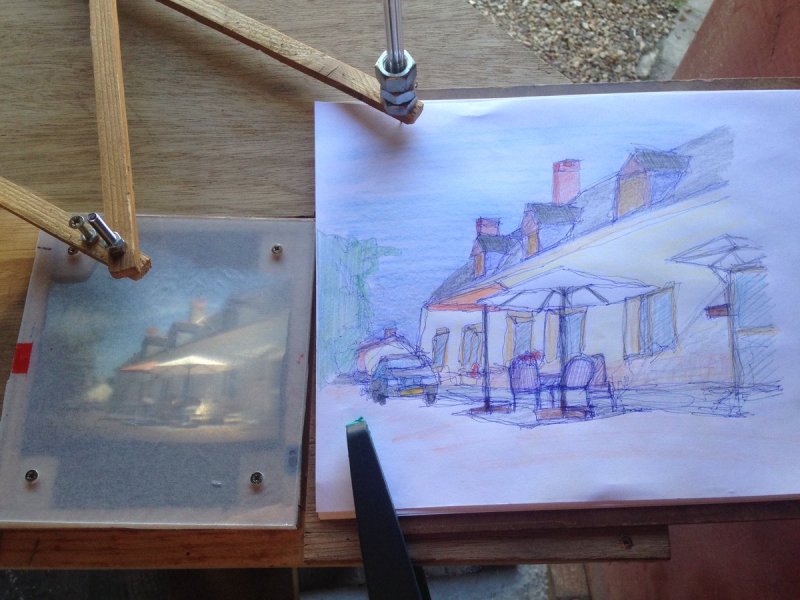 Bundled into a drawing table, this camera obscura is fitted with a mirror underneath at a 45 degree angle so it projects up to the underside of the plexiglass. A blunted nail and a pen in the pantograph’s joints duplicate whatsoever the camera is capturing. For now, [bobsteaman] is forced to cart it around in the trunk of his car to capture the charming scene of his desire, but can also be handily busted out to entertain guests.

The camera obsucra is an ancient technology, but its use extends from observing the recent eclipse to actually taking pictures!

23 thoughts on “Tracing A Scene An Old-Fashioned Way”