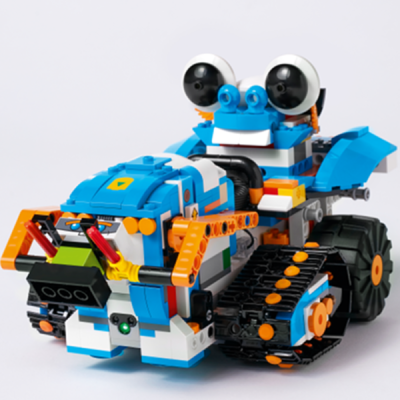 LEGO already has the Mindstorms set, and they just released the Boost robot for helping teach coding, so one would think this a dangerous market in which to exist. Apple has a history of adding features to IOS that duplicate popular apps, wiping out the smaller companies, and with Mindstorms and Boost LEGO can do the same thing by adding to their product line. The LEGO-compatible electronics startups aren’t scared, though, because they believe LEGO’s price point is prohibitive for a lot of people, and the complexity of the kits is a further barrier to kids and educators.

These are valid points; LEGO does come with sticker shock, and working with Mindstorms involves programming. Still, these days it seems like people throw the letters S.T.E.M. on their products and expect parents and educators to throw gobs of money at them, so my jaded-business-guy guess is that claiming “LEGO-compatibility” serves as a price anchor and they only need to price themselves slightly below LEGO prices to make the argument for frugality. Toys are cheap, but electronics are not, and finding a gap for a company to exist is challenging. Also, LEGO has always been known for their easy-to-understand instructions. I’ve seen lots of elementary school kids at FIRST LEGO League competitions showing off their extensive knowledge of Mindstorms programming, which uses drag-and-drop blocks in a graphical user interface similar to Scratch.

For some of the LEGO-compatible companies, though, they perceive the barriers of Mindstorms as too high. Their goal is more about getting a light to blink, or a speaker to make noise, or a button to trigger an action, with no computers and no programming. Their aim is the Hello World of electronics.

This isn’t meant to sound like an advertisement for LEGO; it’s just an observation that LEGO is a big company with a premium market similar to Apple, and the little guys who are trying to play in the same sandbox are at risk of getting stomped by the big guy.

Each company has a different twist they claim makes them better than others. This is not an exhaustive list. There are new players popping in and out of existence all the time. The fear of obsolescence is one barrier that they have for sales; parents and teachers will have a hard time if the electronics sets they buy one year go out of business the next year and they can’t keep buying parts, so there is some justified reticence.

Started by Brown Dog Gadgets, Crazy Circuits leaves the plastic parts to LEGO and makes circuit boards with giant holes that fit over the studs. Connectivity between elements is done with conductive tape or conductive thread. With lots of modules for lights, buttons, power, and even a TeensyLC, this is the closest to working with actual circuit boards, with lots of room to grow in complexity and in contributions from third parties building off their open source components. The lack of plastic allows for another possibility, too; the modules can be sewn into stuffed plushies or other non-LEGO projects.

We covered their giant solderless NES controller a few months ago.

Proud of their patent, E-Blox claims their differentiation is in the complete lack of wires. They have bricks coated with a metal alloy they’ve extensively tested to be safe and won’t wear, and still meets the tight tolerances of standard bricks and child toy safety requirements.  Their current offering is almost entirely LEDs, though other features like motors and speakers are in the pipeline. They’ve only been around a year, and in that time have created an impressive number of injection molded tools for their parts. The company is founded by one of the same people behind Snap Circuits, so they have some history in this field. 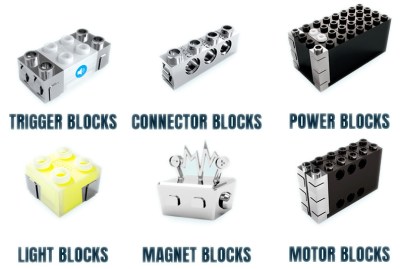 Strangely enough, Brixo is also proud of their electricity-conducting blocks that don’t require wires. They’ve been around longer than E-Blox (their Kickstarter blew up in March 2016, but they only recently delivered) and have a more substantial library of parts, including inputs and outputs, and boast a Bluetooth connected module and app.

It’s a bit of a stretch to call littleBits LEGO-compatible, since it requires an adapter plate that they sell, but they didn’t start off with LEGO compatibility, and they’re making an effort. They have LOTS of modules, though, and lots of experience in the area of teaching kids electronics.

This isn’t really STEM (or STEAM, or STREAM, or any other acronym to try to induce parents to shove twenty dollar bills into the CD slot of their computer). Brick Stuff is all about making sets beautiful with tasteful mood lighting, and it’s easy to go down the rabbit hole with all the pictures of neat LEGO builds.

Algobrix is focused on the programming aspect, and they’ve made a variety of plastic parts that act like programming concepts (loops, inputs, outputs, parameters), with the goal of placing the blocks in certain ways to wirelessly control the Algobrix robot.

Also focused on programming, Cubroid has a bunch of wireless modules, each with its own battery, that uses a computer with Scratch to program and control it.

And now, the elephant in the room. When a crowdfunding project goes live, it starts a clock. If the project is popular and successful, the clock ticks faster. Before the campaign ends, it is not uncommon for there to be an Asian clone of the project available at a significantly lower price point. We saw this happen with the fidget cube and other projects. If budget is your primary concern, then there is little to say, but many of these startups have invested significant time and resources into developing the projects, and to see all of that effort stolen and undercut so the developers can’t recoup their costs is sad and frustrating, and makes it less likely that the system will be around for a long time. The knockoffs are trying to ride a short wave of popularity; the inventors are trying to develop a sustainable river.

Snapping the Parts Together

Taking a broad view of the market, the recent wave of LEGO-compatible educational electronics kits makes sense. STEM is big right now, and LEGO is a great way to get a foot in the door with parents and educators. It’s likely that only a few of the companies will last, but at least if they’re all LEGO-compatible, it’s also possible to mix and match different sets, right? The LEGO format makes a lot of sense as the lingua franca of kids’ STEM kits.