We recently ran a post about a cute little 3D printed elephant that could dispense booze. The design didn’t actually have the plastic touching the liquid — there was a silicone tube carrying the shots. However, it did spark a conversation at the secret Hackaday bunker about how safe it is to use 3D printed objects for food. In particular, when I say 3D printing, I’m talking fused deposition modeling. Yes, there are other technologies, but most of us are printing using filament laid out in layers with a hot nozzle.

There’s a common idea that ABS is bad in general, but that PET and PLA are no problem because there are food-safe versions of those plastics available. However, the plastic is only a small part of the total food safety picture. Let me be clear: I am not a medical professional and although my computers have run a few plastics plants in years past, I am not really an expert on polymer chemistry, either. However, I don’t use 3D printed materials to hold or handle food and while you might not drop dead if you do, you might want to reconsider.

It is true that some plastics are not food safe. The US Food and Drug Administration (FDA) talks about “food contact substances” and has a lot of technical reading on the subject including this mostly readable introduction. There’s even a database with lots of materials (not just plastics) that are food safe.

However, even if some plastics can be food safe, that doesn’t mean that the $11 spool you bought on eBay is actually food safe. You don’t usually know who made it, how impure it is, or what’s been added to it for pigmentation or to modify other properties. However, let’s assume you locate food-grade filament from a trusted supplier. Is that the only problem? Turns out, it isn’t even the biggest problem. 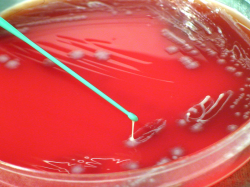 Paradoxically, the biggest problem is microscopic. If you cook or store food much, you probably know that everything you eat is full of bacteria and other little critters. Leave some leftovers out tonight if you don’t believe that. If you make a cup using injection molding with a food-safe plastic, you shouldn’t have a problem as long as you wash the thing after each use. A 3D printed object, though, is going to have little cracks and spaces, especially where the layers make contacts. These are perfect places for germs to hide and multiply. Some foods, too, are worse than others. Raw eggs and meat, for example, are notorious for having dangerous bacterial growth.

There are two schools of thought here. If you are making something disposable, this might not be a big deal. Whatever bacteria get trapped wind up in the trash. The other thing people will do is use a food-safe sealant like polyurethane or silicone to cover the food contact surfaces. Of course, now you need to be sure the sealant is really food grade. In the case of the elephant, it wasn’t so much a sealant as just running a tube through the plastic.

There has been work on making antibacterial plastics. The video below shows one such plastic and it is even dishwasher safe.

It isn’t fun to think about, but one reason dishes get clean in a dishwasher isn’t from the elbow grease, but from the hot water. Some of the best plastics for food — PLA, for example — may deform under dishwasher hot water. So even if you aren’t worried about hiding bugs, you still may not be able to get the plastic really clean. We haven’t tried it, but we hear the best practice is to use warm water and antibacterial soap. 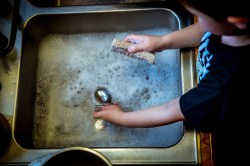 Of course, the same thing happens if you print a PLA soup bowl and then fill it with hot soup. That would be a very bad idea. Not that you can’t find plastics with better temperature resistance, but remember things like ABS are full of nasty chemicals and are generally regarded by most people as not safe for food.

Oddly enough, though, the FDA actually lists conditions where ABS is food safe. Just like with PLA, though, there is no assurance your cheap spool of ABS meets those requirements. Note, too, that they disallow ABS coming into contact with alcohol.

Well, you’ve found your food grade filament and you’ve perfected your process so you will wind up with a cleanable surface, but you still aren’t in the clear. Your filament is going to pass through an extruder and a hot end. Are any of those parts going to leave an unpleasant residue? Brass nozzles, for example, often contain lead. Your gear or hobbed bolt that bites into the filament to move it may have some bad things, too.

There is some thinking that an all-metal hot end is safer than the traditional PEEK/PTFE hot end. However, a lot of cheap “metal” hot ends have some plastic internal components. Again, you have to think of all the things that the plastic can touch. Probably would be a good idea if all those surfaces were cleanable, too.

Keep in mind, too, that your nozzle probably has remains from all the plastic you’ve printed with it before. So that implies you ought to have a machine just for food-safe printing. Well, at least the parts of the printer that touch the filament.

Studies show that 3D printing generates ultrafine particles. There isn’t a clear consensus about the health risks of breathing and ingesting these nanoparticles. You get the same thing from laser printers, but — honestly — you probably aren’t eating anything off a laser printed surface.

You can face a variation on this same problem if you print with food. For example, a printer that extrudes chocolate or icing shouldn’t allow the food to contact bad things on the way to the print. Cleaning the food path, in that case, is super critical. There are certified printers for food like the Chef Jet in the video below.

If you are not worried about all the other problems, you might be looking for food-safe filament. There are a few out there, including some PET filaments. However, you can be sure if the filament is really food grade, the vendor is going to say so. For instance, there’s a safe PLA made by KeyTech (and probably others). You’ll still want to get the material safety data sheet (MSDS) and make sure. But if the vendor isn’t saying anything about food safety, it is a good bet the filament is not recognized as food safe.

What about PLA? There’s a lot of street wisdom that it is safe. After all, it is made from corn. If you have PLA with no pigment or other additives and has been made in a way to minimize unsafe contaminants, maybe it is acceptable. There was a study in 1995 that tested PLA with things that ought to leach out chemicals like booze — we don’t know if they used an elephant or not — and other solvents found in edible materials. They did find a small amount of lactic acid can leach into the food, but it wasn’t a serious concern.

To Eat or Not to Eat?

Lead solder is dangerous too, but I use enough of that. However, I’m not motivated to print food-safe plastics. I think allowing other people to use my 3D printed bowls and cups would be even worse since they would not likely understand the risk. We’ve heard people say that a plastic knife or cookie cutter doesn’t contact the food long enough to be dangerous. I don’t buy that, but I am not an expert. If you must do the cookie cutters, you might try putting plastic wrap between the food and the cutter.

I know of people who follow the tradition of drinking a shot from a shot glass printed on a new 3D printer. Even though the science says you shouldn’t put alcohol in ABS, I haven’t known anyone to die from that practice. However, the body is a complex system and long-term and cumulative effects may be happening that I don’t know about.

I warned you I’m not a doctor or a chemist. I’m also not a lawyer, but I really think selling 3D printed food carriers would be a dangerous undertaking. Of course, you could clearly mark it, or there are US laws about permanently marking items “Not for Food Use,” so that might be a loophole.

In the end, only you can decide how to proceed. But at least be sure you are doing enough research about the plastic and your printing apparatus to minimize your risk. Have you consumed food from 3D prints? Would you? Or will you continue to do so? Share your opinion in the comments.

Oh, one more thing. We certainly are not eating the bacon filament.