With 3D printers now dropping to record low prices, more and more people are getting on the additive manufacturing bandwagon. As a long time believer in consumer-level desktop 3D printing, this is a very exciting time for me; the creativity coming out of places like Thingiverse or the 3D printing communities on Reddit is absolutely incredible. But the realist in me knows that despite what slick promotional material from the manufacturers may lead you to believe, these aren’t Star Trek-level replicators. What comes out of these machines is often riddled with imperfections (from small to soul crushing), and can require considerable cleanup work before they start to look like finished pieces.

If all you hope to get out of your 3D printer are some decent toy boats and some low-poly Pokemon, then have no fear. Even the most finicky of cheap printers can pump those out all day. But if you’re looking to build display pieces, cosplay props, or even prototypes that are worth showing to investors, you’ve got some work cut out for you.

With time, patience, and a few commercial products, you can accomplish the ultimate goal: turning a 3D printed object into something that doesn’t look like it was 3D printed. For the purposes of this demonstration I’ll be creating a replica of the mobile emitter used by the “Emergency Medical Hologram” in Star Trek: Voyager. I can neither confirm nor deny I selected this example due to the fact that I’m currently re-watching Voyager on Netflix. Let’s make it look good.

Before you get out your sandpaper or paints, before the print has even started, you need to make a decision. As anyone who’s used a 3D printer can tell you, layer height is the biggest factor in overall print time. Thicker layers are faster, but result in loss of surface detail. You need to decide before the print even begins if the higher resolution settings are worth the additional time, and the only way to do that is with a clear idea of how the printer’s resolution will effect your final product.

The following image illustrates the effect the three most common layer heights (0.3 mm, 0.2 mm, and 0.1 mm) have on final print quality. For reference, the skull in the Hackaday logo is a bit bigger than Lincoln’s head on a US penny.

Looking at this image you may assume that you should just leave your slicer set to 0.1 mm, and deal with the increased print times. But I intentionally created an example that would really accentuate the differences between the layer heights. You won’t always be dealing with surface details this small, and there’s no sense printing at 0.1 mm layers unless you’ve got a good reason to do so.

To show you why layer height may or may not be important for your specific model, let’s flip these demos around and look at the backs:

The layers are still more visible on the 0.3 mm print, but overall the difference between the three is not nearly as pronounced. With no detail to show the layer heights, a flat surface ends up being…well, flat. Moral of the story: don’t bother using lower layer heights if your model doesn’t have surface detail worth putting the resolution into.

If you intend on finishing a print with the following methods, I would personally stick to 0.2 mm, and if it’s a large print with a relatively simple shape, kick it up to 0.3 mm to save time. Either way, the finished product is going to be smoothed out, so there’s no reason to worry about visible layer lines when it first comes off the printer.

So now that you hopefully figured out what layer height suits your model, you need to actually print it out. This first step sounds easy enough, but remember that you want to start with a well calibrated 3D printer if you’re trying to turn out high quality pieces. Make sure your bed is level, and check your extrusion multiplier to make sure you aren’t over- or under-extruding. Printing some benchmarks are very helpful to get your printer dialed in, and you should really take the time to do it right as it’s only going to save you aggravation in the long run.

So you may be wondering why you can’t print your piece at the lowest layer height your machine supports, wait it out, and then just paint it as it comes off the bed. Well, you can, but the results aren’t going to be much different from having just printed it in a colored filament. But you asked for it, so let’s take a look at how that comes out and call it our “Control” for this demonstration:

Straight off the Printer

If this was a few hours before you had to hit a Halloween party, this will probably look good enough at arms length that you could get away with it. But on the shelf next to my autographed picture of James “Scotty” Doohan? No sir, it just won’t do. 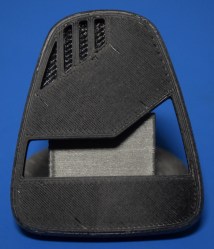 Do you like sanding? No, of course you don’t. Nobody does. But you’re going to be doing a fair bit of it, so you might as well get used to the idea. This early I use an 80 grit dry sanding block, and really attack it. I find printing in black helps during this phase, as the black filament will turn white/gray as it gets sanded down and it makes it easier to see what you’re doing. Once you’ve knocked off all the shine and the piece starts looking dull, you’re on the right track. 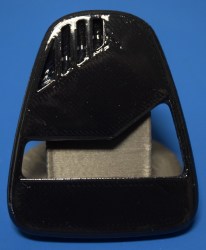 I’m a big fan of XTC-3D, a two-part epoxy product specifically designed for smoothing and sealing 3D prints. It’s fairly cheap, goes a long way, and I think the results speak for themselves. I don’t want to turn this into a guide for using XTC-3D (check out YouTube for some official howtos from the manufacturer), but generally speaking: mix up about 7 ml at a time and brush it on once it starts to get a little tacky with a disposable brush. The idea is to put it on when it’s still liquid enough to find its own level, which allows it to fill in the layer lines and leave you with a hard and smooth surface.

There’s definitely a learning curve with XTC-3D. It’s easy to put on too much and wipe away surface detail, but too thin and the coating doesn’t have an effect. I suggest trying on some scrap prints beforehand to get a feel for how it should flow. Cure time on the XTC-3D is about 24 hours, so block out enough time for this step before trying to move on. 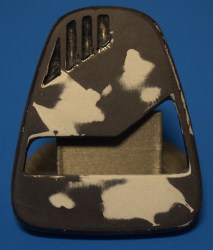 At this point I use a 220 grit wet paper to take the shine off the cured XTC-3D and get it ready for the primer. Like when you sanded the raw printed part, you want to keep going until the whole surface has a dull look. Anything still shiny after sanding is going to be a low spot, and needs to get filled in. My filler of choice is Tamiya “Basic Type” putty. This is basically Bondo for plastic model kits, and dries extremely fast. You’ve got maybe 30 seconds working time from when you squeeze this out of the tube to when it hardens, so don’t try to do too much at once.

After you’ve filled the low spots with the putty, you want to go over it again with the 220 wet paper. The goal here is to fill in the dips and nicks with the putty and blend it in on the surface. The edges of the putty should generally have a “cloudy” look, and you should definitely not be able to feel it if you run your finger over the surface. 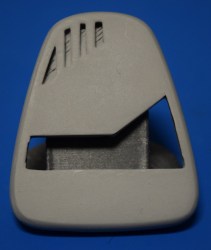 Once you’re happy with how smooth the piece is, it’s time to prime it. I use Rust-Oleum Filler Primer because it’s cheap and easy to find basically anywhere. As the name suggests this primer is fairly thick and will further fill in any imperfections that you missed in the previous steps. I like to do three coats of primer, followed by wet sanding at 400 grit. At this point, your piece should basically feel like glass.

If you’re planning a paint job that’s really going to show surface imperfections, you can do one final sanding pass with 800 grit wet paper to knock off any runs in the primer or bits of dust that might have fallen on the piece while it was drying. 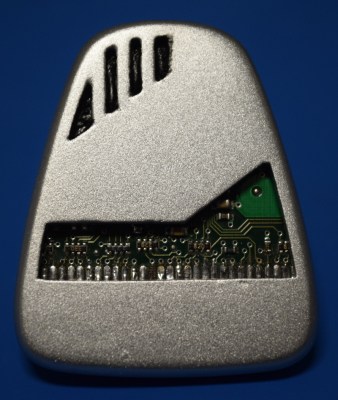 All that’s left now is to do your final painting. As it turns out, I am pretty terrible with a brush or indeed anything remotely similar to art, so I only use spray cans from the hardware store. For this piece I used a basic silver metallic spray paint, followed by a clear matte to take down the shine and give a bit more realistic surface texture.

While this method may seem like a lot of effort, I think it illustrates a fact which more people are coming to realize: 3D printers don’t work miracles, they are a tool like any other. In the same way that you can’t just throw a tree at a table saw and expect a dining room table to come out the other end, it’s important to understand that 3D printing should be considered just one step in the overall process of taking an idea from digital to physical. A big step, granted, but not necessarily the final one.

Some may look at this example and claim I “cheated”, as the majority of the surface of the piece was smashed down onto the bed and therefore relatively flat to begin with. That may be true, but if you follow the steps and look for the visual clues demonstrated in the images, this method will work just as well on the sides of printed objects as it will on the top and bottom. This is the same procedure I used to get the smooth metallic finish on my ThinkGeek-inspired Star Trek phone dock last year, which had exceptionally little surface area on the print bed.

Of course, this isn’t the only way to finish 3D printed parts. We’d love to hear how you’re finishing your prints and getting that not-printed look on your projects.