When we think of building research hardware, lab coats and pristine workbenches come to mind. Shah Selbe used to do something kind of like that when he was engineering satellite propulsion systems. But after putting twelve of them into space, he ditched the office gig and took his gear to some of the wildest places on earth. He’s an explorer and fellow with the National Geographic Society, and at the Hackaday Superconference he shared his experiences building research hardware that gathers data in incredibly remote places.

Shah makes a really good point about two very different trends in our world over the past several decades. While we’ve had unparalleled technological growth, we’ve also seen horrifying wildlife trends to the point that some scientists believe we’re currently in a sixth mass extinction event. But to know that for sure, and look for ways to prevent and reverse it, we need reliable data. This is a fascinating problem because the world is huge, and we simply can’t monitor everything.

It’s just a sidenote getting into his talk, but you’ll really like the Undersea Connection project Shah is involved with. It builds on the Rainforest Connection project, a successful Kickstarter project which collects used smartphones, loads them with custom firmware, and then deploys them in rain forests to listen for illegal logging. The Undersea Connection seeks to build the idea into ocean bouys that can listen for the types of vessels and the types of fishing going on in the area.

The meat of Shah Selbe’s Supercon talk centers around the time he has spent on the Okavango Wilderness Project. He doesn’t just build the hardware, but takes it out in the field with him. The Okavango delta is in Northern Botswana, Africa. As a river delta, the ecosystem hinges on the health of the water entering it. Those waters first flow through Angola — a war-torn, oil-producing country — and pollution gathered along the way threatens wildlife in the delta. 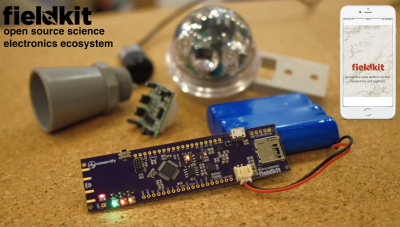 It’s fascinating to see the efforts Shah and his team members have put into reducing the time it takes for collected data to get into the hands of the scientists who need it for their work. In the past, data collection was on local media which then needed to be taken back to the lab and analyzed before it could be acted upon. With the Okavango Wilderness Project much of that data is being live streamed, allowing for a greatly shortened turnaround on discovering problems and recommending mitigation efforts. The team has even been working to collect much higher resolution data in the form of 360 video and wildlife photographs which are well referenced to time and GPS data. Combined with traditional sensor technology (water and air temperature, humidity, water flow rate) a better overall understanding of the state of the ecosystem can be compiled.

Of course custom hardware needs advanced technological understanding to fully utilize. Shah realizes this and has been at work with Conservify.org to build a data gathering solution called FieldKit. The idea is to provide a robust yet inexpensive open hardware platform that is widely available and can be used without needing to be a hardware engineer. You can get an overview of the project from Shah’s summary on Hackaday.io. Also consider following the project page he’s started and keep an eye on the fieldkit webpage as the progress develops.

2 thoughts on “Shah Selbe: Science In The World’s Wildest Places”