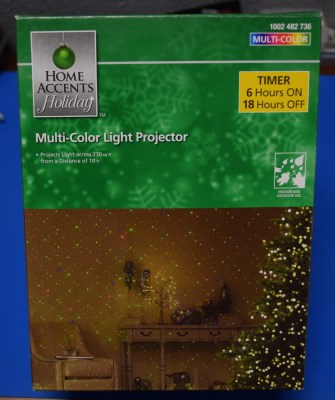 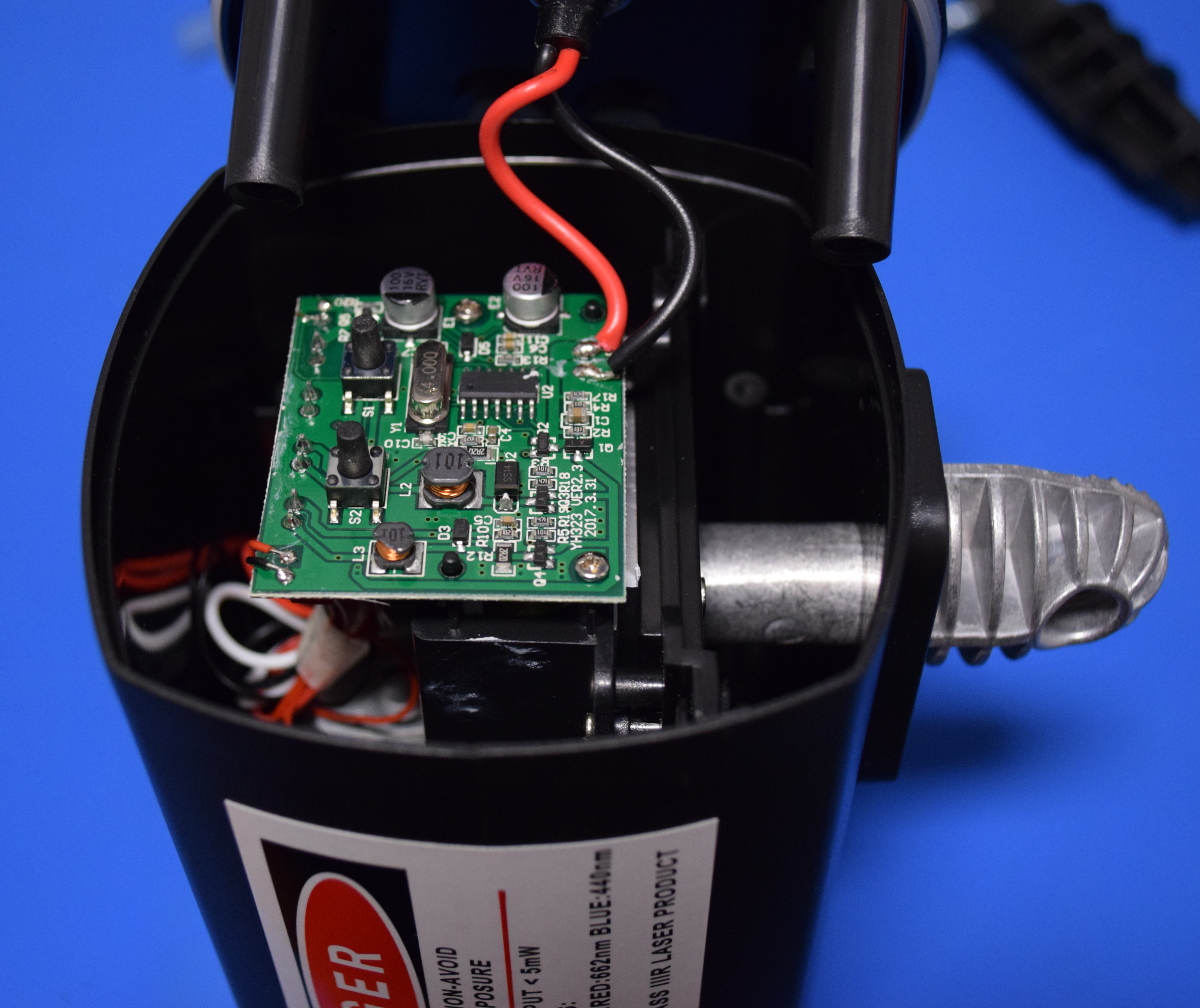 This particular projector isn’t much different from other’s I’ve seen, except for the fact that it actually has three lasers inside. Usually these projectors are just packing red (662 nm) and green (532 nm), but this one has a blue (440 nm) laser as well. Interestingly, there are only two laser apertures in the front of the unit, which means there must be some kind of beam combiner inside that’s allowing two of the lasers to shoot through one window. Presumably it was cheaper and easier to tack a beam combiner into the design than get new cases injection molded.

Four screws on the back of the unit allow you to pull off the cover, which I was somewhat impressed to see had a decent rubber seal around the edge to keep water out. With the back cover off you notice the first interesting element of this projector’s design: the external heatsink.

I had wondered why they used a metal “knuckle” on the mounting stake, and assumed that the finned design of the piece was just to reduce the material needed. But as it turns out the knuckle is connected directly to the primary laser heatsink by means of a solid metal cylinder, they even put a little bit of thermal conductive material on the mating surfaces. It’s not perfect, but at least it gets some thermal mass outside of the airtight body.

Getting a Closer Look

After removing the external heatsink, the “sled” containing all of the internal hardware slides easily out the back. All of the components of the device are easily accessible, and they’ve even gone as far as using connectors for most of it instead of soldering everything directly to the PCB in the back. It’s like they wanted us to strip it for parts.

The largest components are the motorized optics in the front of the sled, and the primary heatsink at the rear containing the blue and green lasers. The red laser is mounted in the smaller heatsink, positioned 90 degrees from the other lasers. This positioning is necessary for the beam combiner (the small angled piece of glass visible in the center) to send both the red and green beams out of the same aperture.

Obviously the lasers themselves are the most interesting part of this device, so let’s get right to the good part: pulling them out. The main heatsink comes off the sled with a couple of screws on the bottom, and it leaves you with a nice little dual-laser module for doing experiments with. The red laser and its heatsink are also easily removed, but let’s be honest: nobody’s interested in red lasers anymore.

The attentive reader might notice from this picture that the lasers are way out of focus: at 3 meters, the spots looked as large as dinner plates. This is easily fixed by using a small pair of pliers on the focusing rings on the front of each laser. Once focused, it becomes pretty clear that these lasers are quite a bit more powerful than the < 5 mW listed on the product’s warning sticker.

In fact, once the blue laser was focused I was easily able to burn pieces of paper and punch holes in black plastic. As for the green laser, it is at least twice as bright as my green laser pointer which is labeled as 50 mW. I don’t have the equipment to measure the actual power of these lasers, but it would certainly not surprise me if they are both at least 100 mW. 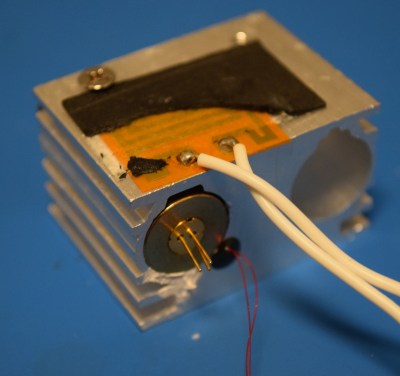 Impressively, the designers of this laser put a considerable amount of thought into thermal management. Not only is there a temperature sensor embedded into the heat sink to monitor for thermal shutdown, but there’s actually a tiny heating pad that’s used to bring the laser up to operating temperature in extremely cold conditions.

In the closeup image, you can see the thermal sensor (thin, red wires) and the heating pad are both clearly centered on the laser occupying the left position in the heatsink, which happens to be the green laser. Strangely enough, the blue laser sits in a black plastic sleeve that completely isolates it from the heatsink.

If you run both lasers out of the heatsink, you’ll find that the blue one gets hot to the touch in just a few minutes, while the green still feels like it’s at ambient temperature. It seems from this simple test that the blue laser is the one that needs more thermal babysitting.

If that’s the case, it was potentially meant to be installed in the left side of the heatsink, and yet somehow ended up being installed on the right. In fact I’m willing to bet that the blue laser will almost certainly burn out of these projectors after extended use, as in its current configuration it has essentially no cooling at all.

If your biggest take-away from this post is that the Home Depot is selling a 440 nm laser you can use to burn stuff, I certainly don’t blame you. If that’s what you’re after, I’d advise putting the blue laser in the red laser’s heatsink. Both laser modules are the same size, and the smaller heatsink should be more than enough in open air. You can then disconnect everything else from the control board, leaving only the blue laser remaining.

But before you power it up, you’ll have to solder in a resistor to take the place of the temperature sensor, or else the control board cuts power to the laser after a few seconds. The sensor reads around 50 KΩ at ambient temperature, so replacing it with something along those lines should keep it happy. In the following image you can see the 40 KΩ resistor I’m currently using.

I’ve been on something of a salvage kick for a while now, so I often think of purchases like this in terms of what kind of useful hardware I was able to extract. For $14, I’ve got to say this is a pretty decent score:

From the optics section we’ve got a nice little geared motor, a beam combiner, and four optical gratings. Three laser modules and a driver board than can power any combination of them at once. Two heatsinks, one with an integrated temperature sensor. A tiny little heat pad, and finally a rugged looking 5V/2A adapter.

By the time you read this it’ll probably be too late to snap one of these up yourself, but there’s always next year. Who knows what dejected goodies will be lingering on the shelf come New Years 2018?

Do you have ideas for other interesting finds we can tear down? Let us know in the comments below.

55 thoughts on “Teardown: What’s Inside A Christmas Laser Projector?”