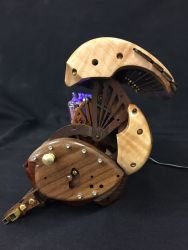 [hellboy] urges strong caution when working with the power supply for these Nixie tubes, doubly so since he needed to modify the circuit to handle turning off while still keeping the time. A little trial and error was needed for proper positioning of the electronics, but he has designed the backplate  to be easily removable should the need to access the internals arise.

Careful assembly of the opening mechanism and repeated testing to make sure everything fit might seem tedious, but he is operating under some stringent tolerances. Once finally assembled, [hellboy] found he needed to add a pair of brass knobs to assist in actuating the clock, as it doesn’t have enough mass to counteract the force on the lever. The addition simply means there is more of this clock to admire. Excuse us while we watch the time pass.

[Thanks for the tip, Irish!]