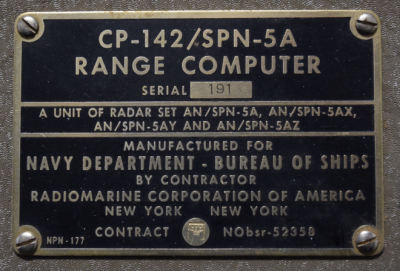 The first thing I was struck with was how big and heavy this thing is. Compared to modern hardware, the CP-142 is built like a literal tank. It’s constructed of thick folded sheet metal with a fascinating crinkle coating of some type that just screams “Old School Military”. It’s roughly the size and shape of a toolbox, with an opening on the bottom that makes me think it was originally intended to straddle some other piece of hardware.

Controls are very minimal: there’s a power switch and “Intensity” dial on the left, and a window to view a mechanical readout on the right which reads “Miles”. On the side of the device there’s a 70mm graduated dial which moves the counter when it’s rotated. It’s immediately clear that rotating the dial is meant to set a specific distance, but more on that later.

After loosening two thumbscrews on the bottom, the CP-142 can be opened up on a hinge to view the internal components. Two clearly labeled fine adjustment knobs near the primary control seem to indicate that opening up the hardware to fiddle with the internals was not uncommon. There’s even a little hex key wired to the frame of the device which can be used to loosen or remove the control dial, likely so the operator could align the marked graduations with the pointer on the front of the case.

The left hand side of the CP-142 is dedicated to the electronics, which consists of four 12UA7 tubes, a 6AK5, a 6AL5, and a Raytheon UX-7350 transformer. There’s no PCB in this device, all the wiring is done point to point, with a few hard metal “rails”.

A thick bundle of wires comes out of the electronics section into a bus bar that’s located right under the lid hinge. There’s also a switch here which cuts power to the device when the lid is opened. Clearly the device would be opened enough that a safety interlock and methods to prevent wire fatigue from repeated opening and closing was deemed necessary.

The bundle of wire is wrapped up with loops of black thread every 10mm or so, which was certainly done by hand. It’s incredible to feel the connection to the manufacturing workforce of the time. In all likelihood, a woman who was part of the labor force who stepped up to support the war effort was tasked with tying these little thread loops around bundles of wires for eight hours a day alongside those workers routing the wires and doing the point-to-point soldering.

Above the bus bar the wiring goes to the power switch, intensity dial, and a bulb which lights the mechanical display. The construction of the switch is something I’ve never seen before, as rather than having a Bakelite body as you’d normally expect from the era (and which is present in other areas of the CP-142), it’s made of sandwiched pieces of some kind of fiberboard.

Everything in the CP-142 is a fascinating look at how hardware, and specifically military hardware, was designed 70-odd years ago. But of all the components of this machine, the dial assembly is the most impressive. It takes input from the user, but also provides them with a real-time display of the range currently selected. This is accomplished mechanically, with the counter and dial on the same axle.

A pair of beveled gears are used to connect the axle to a massive potentiometer mounted 90 degrees from the dial. Rotational end-stops are provided by a small section of threaded rod and a little constrained nut that rides it. The nut cannot rotate, so it moves horizontally across the rod as the dial is turned. Once it hits the minimum or maximum travel, precisely machined ledges come into contact, making further rotation impossible.

For you input device aficionados out there, I have to say, the action on this dial is incredible. The dial itself weighs in at 260 grams, and even with all the mechanical movement involved it feels extremely smooth. I’ve spent more time than I care to admit spinning this dial back and forth over the last few days.

I’m not sure at what point I decided I wanted to try to power up the CP-142. I kept looking at the red tag attached to the device that says “TESTED OK – 4/6/54” and wondering if a machine that had been in storage for 64 years would still work.

None of the wires were labeled, but documentation for the vacuum tubes was easy enough to come by (the 12AU7 is still used in audio amplifiers), and with a multimeter I could track where everything was going. The bus bar and fastidiously color-coded wiring also helped immensely. I knew what voltages the vacuum tubes wanted, and on which pins they should be getting it. In theory it should just be a matter of plugging the correct voltages into the bus bar and hoping for the best.

I’ll be totally honest, when I saw that display flicker on and those tubes start warming up for the first time in over six decades, it was a pretty incredible moment for me. This is the kind of technology that I’ve always admired, but to have this legitimate piece of history up and running on my bench gave me an opportunity to connect with that era that I’ve never had before.

Owing to my modern interpretation of the word “computer”, I originally thought that this device would take some kind of signal from the radar and use that to rotate the physical counter. But once I took it apart I realized that the counter was connected to a potentiometer, the value of which was being read by the on-board electronics. Logically, it seems that the electronics must be taking the variable resistance of the potentiometer and turning that into a frequency which the vacuum tubes are amplifying.

On the bottom there are two N type RF connectors, and I reasoned that if I put the oscilloscope on them I should be able to see something happening as I manipulated the controls. One of the connectors didn’t seem to have anything of interest going on, but on the second I saw the confirmation I was looking for:

Seeing the oscilloscope come alive after I spun the dial on the CP-142 convinced me that, while I might not have everything 100% correct about this particular piece of vintage wartime tech, I must be pretty close. There are still some questions, of course. What does the radar do with this signal? What does the second RF connector do?

In any event, I’m satisfied with the amount of knowledge I’ve gained about the CP-142. Usually at this point in a teardown I would start thinking of how I could salvage parts from the device, but in this case it doesn’t seem appropriate. Even if that dial assembly is just an Arduino away from being an awesome USB input device, this veteran will be enjoying the rest of its retirement on a shelf in my office. We’ve got history together.