Considering that his father was coming up with detailed schematics for submarines in his pre-teen days, it’s probably no surprise [Ronald] has turned out to be a rather accomplished maker himself. He took the original designs and started working on a slightly more refined version of the CURV II in SolidWorks. Not only did he create a faithful re-imagining of his father’s design, he even went as far as adding an interior as well as functional details such as the rear hatch. 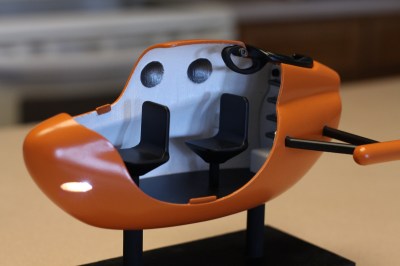 Once the pieces for the submarine were printed out, it was time to begin the finishing process. The bulk of the documentation for this project covers how [Ronald] took the raw printed parts and finished them, which is sure to be of interest to anyone who’s ever wished their printed projects didn’t actually look like they were printed. The secret is a mixture of filler primer, sand paper, and an incredible amount of patience.

As if he wasn’t already making us all look like terrible children by comparison, [Ronald] finished up the CURV II model with LED lighting (controlled by a little switch on the sub’s control panel) and a wooden base. The end result is a high quality model that’s sure to be sitting in a place of honor for years to come.

The 3D printed models we see here at Hackaday tend to be of the engineering variety, so it’s nice to see something that isn’t quite as serious. We love that for all the refinement that went into the model, the overall look still retains the cartoony lines and proportions that remind you this is the product of a child’s mind.