Levers are literally all around us. You body uses them to move, pick up a pen to sign your name and you’ll use mechanical advantage to make that ballpoint roll, and that can of soda doesn’t open without a cleverly designed lever.

I got onto this topic quite by accident. I was making an ornithopter and it was having trouble lifting its wings. For the uninitiated, ornithopters are machines which fly by flapping their wings. The problem was that the lever arm was too short. To be honest, as I worked I wasn’t even thinking in terms of levers, and only realized that there was one after I’d fine-tuned its length by trial and error. After that, the presence of a lever was embarrassingly obvious.

I can probably be excused for not seeing a lever right away because it wasn’t the type we most often experience. There are different classes of levers and it’s safe to say that most people aren’t even aware of this. Let’s take a closer look at these super useful, and sometimes hidden mechanisms known as levers.

Levers Are One of the Oldest Mechanisms

Technically speaking, levers predate humanity. You find them in biology — your forearm is a good example which I’ll go into later in the article.

When it comes to man made mechanisms, levers are suspected to have been used as long ago as Ancient Egypt for lifting large block and obelisks but the earliest writings of their working principle come from followers of Aristotle and from Archimedes, both dated around 300 BC. Archimedes gave this static description of it:

Magnitudes are in equilibrium at distances reciprocally proportional to their weights.

He also famously said, “Give me a place to stand on, and I will move the Earth.” Putting this into practice, he’s reputed to have devised a defensive weapon called the Claw for fighting off ships attacking city walls. Historical accounts seem to describe a crane sitting on the wall which lowers a grappling hook onto attacking ships and lifts them out of the water, capsizing or sinking them.

The law of the lever states that:

Mathematically, it can be stated as:

Note that we’re not talking about free energy here. The power input is equal to the power output, ignoring losses due to friction, wear, and bending of the lever beam. Power is force multiplied by velocity and they differ proportionately from each other. If a > b then the load will move more slowly than the point where the effort is applied (which must move a greater distance in the same amount of time).

Levers can be arranged in different ways and are described in three classes, all of which follow the law of the lever. 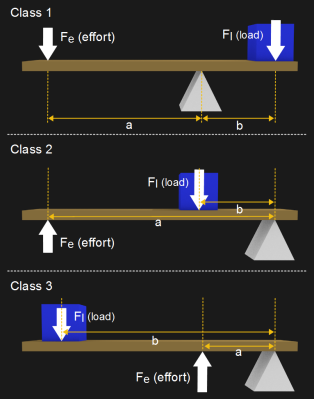 Class 1 is perhaps the most familiar. Examples of that are a seesaw, a crowbar as well as any time you’ve picked up a stick and placed it on a handy pivot point to lift something heavy at the other end of the stick. A pair of pliers are class 1 levers which we use very often but rarely recognize them as such.

The arrangement of the class 3 lever can be the most difficult to visualize. The fulcrum is still at one end of the lever, but the effort is now in the middle, with the load at the opposite end. It’s harder to think of everyday class 3 examples but we’ll see three of them below. When we look at an exoskeleton arm, a human arm, and a rubber band driven ornithopter wing we’re viewing class 3 levers. 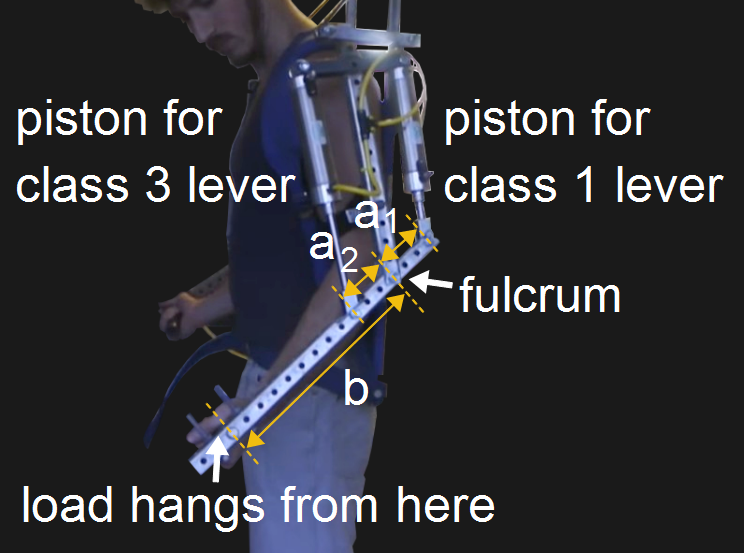 I searched for a great example of a lever in a hacker made project and came up with a great one by our very own [James Hobson]. He built an exoskeleton with arms for lifting heavy loads. Interestingly, each arm contained both a class 1 and a class 3 lever.

The arm is actuated by pistons. The main difference between class 1 and class 3 levers is that the load and the fulcrum have been switched. Here you can see that the location of the rear piston creates a class 1 lever, the location of the front piston creates a class 3 lever. You can see him use the rig to curl a 170 pound barbell.

Levers In The Human Body

With all its muscles, bones, and joints, it should be no surprise that the human body makes abundant use of levers.

However, they’re not always used for mechanical advantage. In the case of lifting a load by raising the lower arm and using the elbow as the fulcrum, the effort is provided by a muscle in the upper arm. This muscle is attached to the lever (the bone) very close to the fulcrum, meaning that a is short compared to b, which extends from the fulcrum to the load in the hand (in the diagram, R stands for Resistance). Therefore the mechanical advantage a / b is less than one.

Instead, the benefit here is that a small movement of the bone at the muscle produces a large movement at the hand. This makes for a compact and agile arm which can be useful in tight spaces. A lifting muscle which instead extends from the shoulder to near the wrist would get in the way much of the time. Note that James has done a similar thing with his exoskeleton arm, though he added the second piston to push while the other pulls/lifts. 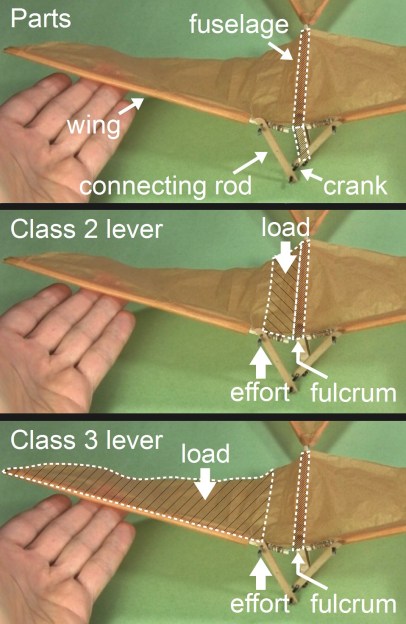 The typical rubber band powered ornithopter has a fuselage running down the middle that acts as the main body to which all the parts are connected. At the bottom of the ornithopter’s fuselage is a crank which is turned by a twisted rubber band. Connecting rods connect the wings to the crank. Turning the crank raises and lowers the wings through the connecting rods. This raising and lowering can be seen clearly in the animated GIF.

Looking at the diagrams, the fulcrum is in the middle of the ornithopter, at the top of the fuselage. It’s there where each wing pivots as they flap up and down.

The load is actually the air pressing on a wing membrane as the wing is pushed up or pulled down, though my issue was most evident when pushing up.

The effort is applied from below, where the connecting rods connect to each wing.

The non-obvious lever in my ornithopter turned out to be a combination of two different classes of levers, a class 2 and 3 lever, both of which exist in each wing.

So while levers don’t always stand out, they are found in a large number of places. That’s doubtless due to how useful they are. We’d like to hear in the comments below where you’ve used levers or which surprising places you’ve found them in.