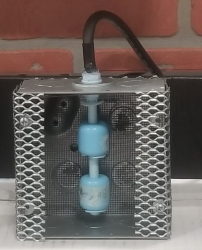 29 thoughts on “Flood Fault Circuit Interrupter Could Save Lives”

Leave a Reply to Someone Else Cancel reply