For most of the early days of radio, most of the innovation was geared toward providing communication at a distance. Whether it be radiotelegraphy, radiotelephony, or even radio broadcasting, distance was the driver. The further a single transmitter could reach, the fewer links would be required to make a communicate between any two points, and the larger the audience that could be reached with a broadcast. Due to the physics of radio frequency propagation, this put all the action in the longer wavelengths, the space on the spectrum with wavelengths between about 10 meters and 100 meters or so.

Some researchers were looking further up the spectrum, where wavelengths better measured in centimeters are found. These frequencies wouldn’t be of much use for long-haul communications or broadcasting, but they needed to be explored and exploited, and so the tools and technologies needed to produce them would have to be developed. 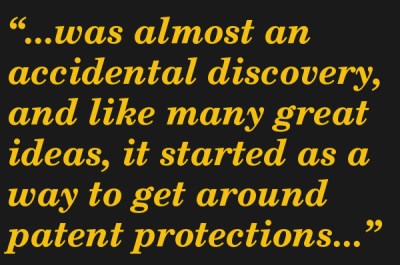 One of the devices used to generate short-wavelength radio frequency waves was almost an accidental discovery, and like many great ideas, it started as a way to get around patent protections on somebody else’s great idea. Such was the case in 1917 when Albert Hull, a researcher at General Electric in the USA, was working on ways to control the flow of electrons in a vacuum tube without running afoul of Lee DeForest’s triode patents. DeForest’s tube used electric fields to control electron flows, so Hull experimented with magnetic fields to do the same. Hull named his invention a “magnetron.” His employer’s purchase of the triode patent put further development of the magnetron on the back burner, but not before Hull discovered that by carefully controlling the magnetic field at a critical value, the tube could emit radio frequency waves with a much shorter wavelength — less than a meter — than anything else at the time.

At the same time, physicists around the world were working on similar technologies to produce shorter wavelengths. German and Czech scientists used modified triodes to produce the first real microwave (1 GHz and above) oscillator, and Japanese scientist Hidetsugu Yagi, later famed for the Yagi-Uda antenna, developed his own magnetron design that produced wavelengths as short as 5.6 cm. Dutch, French, and English researchers got into the act as well, pushed down the wavelengths while increasing the radiated power by changing the design of the magnetrons.

With war on the horizon, few of them missed the fact that powerful, short-wavelength radio waves would be immensely useful for remote detection of aircraft and myriad other uses. Competition between countries for microwave supremacy was fierce — worldwide, no fewer than 2,000 patent applications were filed between 1920 and the end of the war in 1945. The simultaneous invention process was a sort of artificial selection process, where the good ideas were rapidly identified and used to improve designs. This process led to the cavity magnetron, a design with a cylindrical central cavity surrounded with similar holes arranged around it and connected to it by narrow slots. In use, a central cathode emits electrons which circle around the central cavity under the influence of a strong magnetic field, sweeping past the slots and inducing strong microwave fields inside the resonating cavities.

Correctly engineered, cavity magnetrons can produce powerful microwaves. For the British, the task of turning the cavity magnetron into a working device fell to John Randall and Harry Boot, physicists at the University of Birmingham. They were given a simple but lofty set of goals: build a microwave source of 1,000 watts with a 10-cm wavelength, specifically for airborne radars that could be used against the Germans and their near nightly bombing raids.

This would prove to be no mean feat because at the time, Boot and Randall had not even heard about the cavity magnetron. But they did their homework, and within a few weeks had built a prototype that was able to produce 400 W at a wavelength of 9.9 cm. This success led rapidly to improvements; they made their performance goal of 1 kW a week later, and in subsequent weeks 10- and even 25-kW magnetrons were constructed. Thanks to Boot and Randall, the magnetron was almost ready for battle.

Unfortunately, the British had a problem. Surrounded by the enemy and virtually cut off from the rest of the world while mobilizing against the coming invasion, England had no resources to turn Boot and Randall’s magnetron into usable weapons. They faced a difficult decision: keep the secret and risk dying with them, or share the secret so that it could be used against the enemy. It was time to look across the Atlantic for help.

The idea of a technology swap with the Americans was the brainchild of Henry Tizard, head of the Aeronautical Research Committee, under whose auspices the magnetron had been engineered. Tizard proposed what was essentially a gift to the Americans, a bundle of every major secret the British had. This passel of technological treasure included not only the Boot and Randall magnetron, but designs for proximity fuzes, plastic explosive, self-sealing fuel tanks, rockets, superchargers, gunsights, and even papers detailing the feasibility of a nuclear fission bomb. With Churchill’s approval, almost every one of Britain’s hard-won secrets would be delivered to the Yanks, no strings attached, with only the hope that the uncommon bond between the two nations and the isolation and industrial power of the then-neutral US would result in something to help the war effort.

Six men, mostly from the military, formed what would be known as “The Tizard Mission.” They accompanied the secret stash, which included a working prototype of the Boot-Randal magnetron, on its almost inconceivably risky journey across the U-boat infested waters of the North Atlantic. Somehow, the Tizard mission arrived safely in Halifax, Nova Scotia, and was swiftly shuttled to Washington DC for meetings.

Within weeks, the prototype magnetron was handed over to Bell Labs in New Jersey, where the first 30 copies of the eventual one million that would be produced in America were made. The magnetron would eventually become small and light enough to be used in airborne radar sets, with larger, more powerful versions turned into shipboard and land-based sets. The magnetron had been weaponized, and there’s little doubt that it impacted the prosecution of the war.

It was said by historian James Phinney Baxter that the cavity magnetron the Tizard mission brought to America was “the most valuable cargo ever brought to our shores.” While certainly not an understatement given the importance and prevalence of microwaves in everything from communications to cooking, it’s hard to fathom the impact that all the treasures that simple tin box contained would have on the second half of the 20th century. Both in war and in peace, the Tizard Mission laid much of the technological foundations for the post-war era, with the cavity magnetron leading the way.

36 thoughts on “Hacking When It Counts: The Magnetron Goes To War”