Mere weeks after tariffs were put into place raising the cost of many Chinese-sourced electronics components by 25%, a second round of tariffs is scheduled to begin that will deal yet another blow to hackers. And this time it hits right at the heart of our community: 3D-printing.

A quick scan down the final tariff list posted by the Office of the US Trade Representative doesn’t reveal an obvious cause for concern. In among the hundreds of specific items listed one will not spot “Filaments for additive manufacturing” or anything else that suggests that 3D-printing supplies are being targeted. But hidden in the second list of tariff items, wedged into what looks like a polymer chemist’s shopping list, are a few entries for “Monofilaments with cross-section dimension over 1 mm.” Uh-oh!

That would seem to specifically target the typical 1.75-mm filament that most FDM printers like to eat; however, the line items specifically list the proscribed items as being polymers of ethylene, acrylic, and vinyl chloride. Neither PLA nor ABS, the most popular filaments, fits into any of those categories. The next line item, though, appears to be the gotcha: “Monofilament nesoi [Not Elsewhere Specified or Indicated], of plastics, excluding ethylene, vinyl chloride and acrylic polymers.” This would seem to include plastic filaments of any dimension and made of any polymer other than those listed above, which represents a broad category of products that could include anything from fishing line to spools of weed-whacker line. And, apparently, PLA and ABS printer filament. 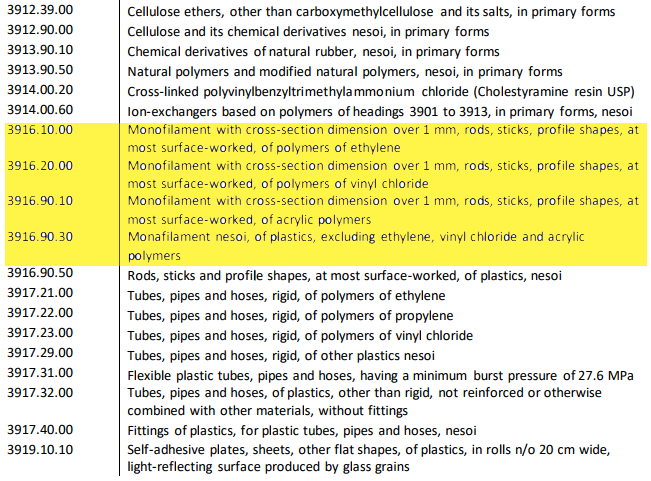 But wait; it gets worse. Not only are finished filaments apparently covered by the 25% duty, but the raw polymers going into their manufacture are also covered, with both ABS and PLA getting their own line items in other parts of the list. It’s especially telling that neither of these line items has any sort of modifiers; there’s no mention of form or viscosity or modifying chemistry like there are for most other polymers on the list. That seems very broad, and would seem to give Customs agents wide latitude on slapping the tariff on any shipment of raw ABS or PLA. That’s bad news for US-based filament manufacturers who source their PLA and ABS from China.

Has any of this bad news filtered through the market yet? It appears not; a non-exhaustive search of PLA filament price history on camelcamelcamel shows that the price of Chinese-made filament has been stable over the last few months, so the market has yet to factor in the tariff. With the tariff set to go into effect on August 23, we’d expect that to change soon, though.

As with any tariff, the impact on the consumer’s bottom line is hard to predict. Markets are flexible and tend to adapt to the challenges presented to them by switching suppliers and finding new ways to do business. In this case, many countries other than China make both PLA and ABS, so manufacturers can shift suppliers if it makes sense to do so. But global trade is a complex web of agreements and alliances that don’t often take the little guy into account. So you can bet that this tariff will have an impact on 3D-printer filament pricing. With duties starting in a little less than two weeks, we’ll know how much of an impact pretty soon.

Thanks to [Scott McGimpsey] for the heads up on this one.