As a user, you will find a SIM card along with your badge, from the IoT connectivity provider Hologram. This is a fully-functional SIM for public networks, however it serves simply for access to the event network and no Hologram sign-up is required on-site. We are told that the network doesn’t implement the SIM-based encryption of the commercial networks so in theory any SIM would work at the network level, however the supplied batch of Hologram SIMs is manageable enough in size that they are individually authorised on the network.

Users will receive a 5-digit number, however you can register your choice of a 4-digit number with the “Phonebook of Electromagnetic Field 2018” (known as Eventphone) and tie it to your GSM number. For Hackaday, we’ve registered 4096. We are told there will be an outgoing connection providing free calls to the UK, US, and Europe, and there will be incoming access via a gateway number. There will also be a range of special numbers for such matters as audio feeds and other on-site facilities, and they hope to have the Jasmin SMS-to-HTTP gateway running to provide a hackable interface for apps using the badge. There is no GSM data connectivity, as any data can be channeled more effectively through the on-site wireless network. Each base station only has capacity for 7 calls simultaneously, and since GSM data streams take calling channels there would very quickly be no voice bandwidth available were data to be enabled. It will be interesting to see if anyone hacks together their own cell data system during camp!

Perhaps the most interesting background story surrounding the network comes from the way it is licensed. Anyone capable of setting up Osmocom can create a GSM network of their own, but for an event such as Electromagnetic Field it must be an officially sanctioned affair to avoid all concerned getting into trouble with the law. 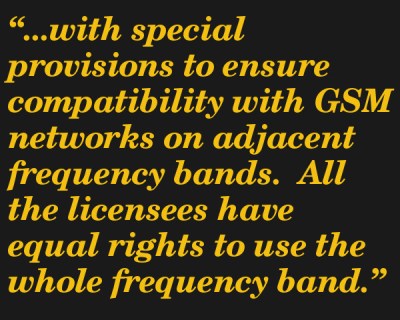 After a few mergers in the cellular phone industry there are four main British network providers, and securing a network licence can be an extremely costly affair with price tags running into the billions. Over the years some quirks have appeared in the system as an unintended consequence of different political regimes administering it. One of the most useful quirks is the so-called concurrent network access licences. These are a special class of low-power licence in the 1800 MHz range in an allocation originally left empty as a guard band between GSM and DECT allocations. Whereas other cellular licenced frequency rages are exclusive to the operator that holds them, this one is shared across a number of licencees using it concurrently. There are a number of licence holders, including small some unexpected small players as well as the big ones, and it is one of these companies that has rented its licence to the event.

The Surprising Simplicity of a Complex Network

We’re impressed with this network, with the relative simplicity of its hardware implementation, the useful functionality it will provide, and the way they have secured a licence for it. We know that like all the systems at a hacker camp a lot of work has gone into it, and on behalf of all attendees we’d like to thank all concerned for making it happen. We look forward to seeing what you will all do with it.