What do acorns and CT scanners have to do with old documents? Printed records degrade over time and eventually, just the act of unfurling a scroll can spell doom for ancient artifacts. Left untouched, the information is still there and clever use of x-rays can read it.

It turns out that fruits like acorns were the source material for the ink used on many historical documents. David uses a scan of an acorn colonised by parasitic gall wasps to illustrate how mineralisation in an acorn can be easily seen in a CT scan. The same should be possible with the mineralisation of inks in the documents.

The first tests of this technique were performed on a set of rolled-up parchment mediaeval manorial records from Norfolk, England. They were able to produce a readable virtual unrolling! After this breakthrough they were approached by a postal museum in the Netherlands with a set of 17th-century unopened letters, an ongoing project that presents a particular challenge due to contamination from both powdered seashells used by the authors to absorb surplus ink, and from lead in the wax seals used upon the envelopes.

The Salvation of Classic British Comedy 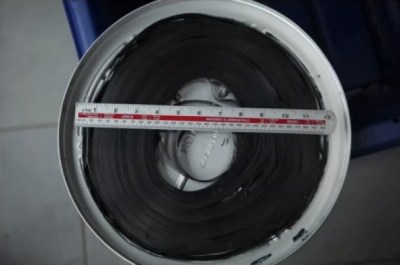 Earlier this year we covered the discovery and recovery of some very old, very rare, and very damaged film. That was some of David Mills’ work! It seems in the world of historical scanning that once you have a success, word gets around and you are besieged with interesting artifacts.

The BBC had some heavily degraded triacetate film stock containing a lost episode from the British comedy duo Eric Morecambe and Ernie Wise, and wanted to retrieve what they could from it. To say it was in awful condition is an understatement.

This type of film releases acetic acid as it decomposes, further accelerating damage to the film. As with the written scrolls, trying to unroll this film would destroy it. David’s team first used a laser cutter to segment the fused film reel into pieces small enough for the scanner. They have retrieved recognisable images from it, but there is still much work to do. In conjunction with a BBC team they are developing software to aid in the post processing to help remove distortion, and soon hope to revive one of those British traditions: a new Morecambe and Wise Christmas TV show.

Sometimes You Just Have to Have Some Fun

Of course like any of us, having access to rare and awesome tools leads to some fun side projects. David x-rays his lunch, and has competitions on social media to guess what he’s eating today. Wondering what an x-ray emitter looks like while running, they’ve scanned an iPhone with its camera rolling. The resulting video came complete with white spots from x-rays interfering with the camera. He also mentions imaging a non-functional pound shop USB hub that proved to have all ports wired in parallel and a black epoxy blob with no chip underneath. It seems a pound only goes so far.

Most of us will never encounter a CT scanner, but David’s talk gives us an entertaining and informative journey into this exciting field. Check it out, it’s a worthy way to spend half an hour.

22 thoughts on “The Use And Abuse Of CT Scanners”