I recently saw Apollo 13 again — this time with the score played live by the Houston Symphony. What a crazy coincidence that thirteen has long been considered an unlucky number and that Apollo 13 would be the one we almost lost. However, Apollo 12 almost became a disaster which — after the ordeal with flight 13 — was largely forgotten.

When all was said and done, Apollo 12 would result in a second manned moon landing in November 1969, just four months after Apollo 11. Commanded by Pete Conrad, Alan Bean accompanied Conrad to the surface while Richard Gordon, Jr. kept the getaway vehicle running. But less than a minute after launch something happened that could have been a disaster. Lightning struck the vehicle.

The first strike caused the avionics to falsely detect an overload and shut down the spacecraft’s fuel cells that produced electricity for the instruments. A second lightning strike took out some key instruments. The backup batteries could not handle the launch load and some other systems begin to shut down.

Think about that for a minute. You are in a cramped space in a seven million pound vehicle, burning fifteen tons of fuel per second, accelerating towards about 6,000 miles per hour. (See the video below to relate that to elephants.) Suddenly dozens of warning bells and lights go off.

There was very little time to react. There were several abort procedures, although if there was damage to the spacecraft, you couldn’t be sure those were going to work, anyway. One of the flight controllers, 24-year-old John Aaron, was responsible for electrical and environmental consumption. He remembered a test of a power supply malfunction that caused similar haywire telemetry.

He asked the flight director to advise the crew to switch Signal Conditioning Electronics (SCE) to Aux. The problem was, the flight director Gerald Griffin, and the capsule communicator Gerald Carr didn’t know where that switch was located. Neither did Pete Conrad. Luckily, Alan Bean remembered a training incident — maybe the same one Aaron remembered — and systems were restored.

Don’t think this is a big deal? Have a look at that cockpit. Can you find the SCE switch? We’ll wait.

Need a hint? Look at the right-hand panels. Still stuck? How about panel C? On the bottom row of panel C there are six toggle switches. The fourth from the left is the one Bean had to find. While a few million pounds of rocketship was shaking all around him.

Not Out of the Woods

The crew made it to orbit, but there were still concerns. They checked everything they could. While it all seemed to be working, flight controllers were afraid the lightning could have caused problems with the parachute deployment. The crew could have a very successful mission, return home, and crash out of control into the Pacific. There wasn’t any way to be sure, so they decided to not inform the crew. Luckily, at the end of the mission, the recovery system worked fine.

By the way, you can hear the crew dealing with the emergency in the video below. They sound a little worried, but not nearly as bad as you would think. After it was over, though, you can hear the relief in their banter.

Pete Conrad was known for his sense of humor. We’ll never know what he would have said if he’d been the first man to walk on the moon. But he was the third man, so he said, “Whoopie! Man, that may have been a small one for Neil, but that’s a long one for me.” That sounded extemporaneous, but in fact, he had made a $500 bet with a reporter that he would say those words when he landed on the moon. Apparently, he never collected on the bet.

The mission was mostly a success. One of the biggest goals was to prove they could land at a specific spot. Apollo 11 did not land where it had planned because the surface wasn’t suitable there. Bean had to adjust the landing zone a little, too, but not much. The plan was to land close — but not too close — to the Surveyor 3 probe. They were 600 feet away when they landed, although the probe was behind them so they couldn’t be sure right away how close they were.

Supposedly, there was a “stand up EVA” where Conrad popped his head out the hatch to look for Surveyor. I say supposedly because that’s a little moon landing conspiracy theory about why there’s no record of it.

There were other minor hiccups. The crew had the first color TV camera on the moon and mistakenly pointed it at the sun, burning out one of the imaging tubes. Bean accidentally left some exposed film on the lunar surface. We wonder if someday that film will be recovered and developed — probably not, though, as it is probably ruined by radiation over that much time. Another camera glitch: Bean smuggled a non-regulation self-timer so he could take a picture of both of them together on the surface. The timer was misplaced which is probably a blessing in disguise, since that picture would have caused a frenzy in the conspiracy theory circles.

To add injury to insult, when the capsule splashed down, a camera came loose and struck Bean’s forehead. He was knocked out and required six stitches. Still, better than crashing into the ocean with no parachute.

You could argue that 12 is a lucky number because none of the bad things that happened turned into a disaster. By that token, though, so is 13 because despite all odds, the crew made it home.

The truth is, we were pushing the envelope going to the moon back in those days. Each mission had problems. Apollo 11 overran its computers. We just talked about 12, and the issues on 13 are well known. Apollo 14 almost didn’t have a successful docking between the command module and the lunar module: it took six attempts and a non-standard procedure.  It also required a software patch in flight to solve a problem with a solder joint. On top of that, the landing radar failed to lock due to an unrelated software bug. 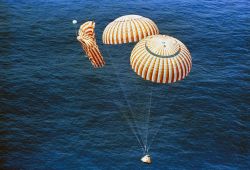 Proving that practice doesn’t always make perfect, Apollo 15 had a problem with the Saturn V booster that almost forced an abort and damaged a telemetry package. They also landed with one foot in a crater which had the lander pitched ten degrees off the vertical. An oxygen leak on the moon turned out to be an open valve on a space toilet. On reentry into Earth’s atmosphere, one of the parachutes failed to deploy. Ever wonder why there are three parachutes? It’s because they need two.

Apollo 16 was the first to suffer a launch delay due to technical problems including an accidentally damaged fuel tank. While orbiting Earth there were minor problems with environmental controls and the rocket’s control system. More seriously, the lunar module had damage to its skin forcing the ship to adopt a corkscrew-like motion to ensure the damaged area didn’t overheat. En route to the moon, the navigation system decided to fail, requiring a realignment using the Sun and the moon as reference points. The landing almost didn’t happen when the command module’s steering jets developed a problem and flight controllers worried they might need the lunar module to help send the crew back to Earth. On the moon’s surface, the crew dealt with a faulty lunar rover, a broken fender, and a snapped cable snaring one of the astronauts.

Even the final mission — Apollo 17 — had problems. An automatic shutdown stopped the launch 30 seconds before the launch time. The lunar rover lost another fender which was famously repaired with duct tape and plastic maps.

I think the Apollo near disasters are a great lesson in engineering. The fact is, things don’t always work. But smart people can usually find a way to make things work. This was exemplified on each and every Apollo mission, not just Apollo 13.

Back in the 1970s, RCA had a recruitment ad that said, “The best electronic brains are still human.” Despite the media hype about artificial intelligence, people are still our best problem solvers. It is tempting to automate everything. When that works, that’s fine. But how many times have you had a piece of software or hardware that is supposed to “just work” fail and then not give you enough diagnostic information because of the designer’s hubris?

Some people want to take humans out of spaceflight for cost and safety reasons. That’s a mistake. Problems will occur and they will — at least for the foreseeable future — require humans to fix them. And there are other benefits. In our own designs, we should think about what people will need when the problem we didn’t think about happens. When faced with a problem, too, we can draw inspiration from the men and women who built and operated the systems that put a dozen people on the surface of the moon against incredible odds.