Just like Goldilocks found some porridge too hot and some too cold, 3D printers often have beds that don’t stick well enough or stick too well. A few weeks ago I switched two of my three printers to use magnetic beds and thought I’d share with you how that worked out. Spoiler alert: like most things it has its plusses and minuses.

It isn’t a secret that 3D printing is not a plug-and-play operation, especially at the price most of us are willing to pay for printers. There are lots of variables to get right: temperature, speeds, bed leveling, and a bunch of other things. However, one of the things that vexes many people is the relationship between getting that first layer to stick and being able to get the print off the bed when you are done. It is hard to find a happy medium. If the first layer won’t stick, you print is doomed. If the first layer sticks too well, you are likely to damage the part or your fingers getting it removed. I switched to BuildTak surfaces long ago, and many people like PEI. But it is sometimes hard to get a big part removed. A few weeks ago, I took the plunge and bought some magnetic build surfaces for two of my printers. These were “no name” inexpensive affairs from Ali Express.

The idea is simple. There are two sheets that look like a rubberized plastic and have magnetic properties. One piece has some 3M adhesive on the back. The other has one surface that resembles BuildTak. Once you glue down the one sheet you leave it alone. Then you put the other sheet on top and print on it. When you are done, you can pull the sheet out and flex it to pop the print off. That’s the theory, anyway.

Installation is really easy. If you bought the right size, just stick it down on your existing bed. If you bought a bigger size — and you might want to if you have a small print bed, as you’ll see — you can cut the material with reasonably good scissors.  If you are cutting a rectangle, though, be careful: the two pieces of material lock together in a certain way. If you turn the top piece at a right angle to the “correct way” the top layer won’t stick very well. In the right orientation, you can feel a satisfying “snap” when the top layer locks to the bottom layer.

If you have a smaller bed, you might want to buy a bigger piece and cut it. Here’s why. The top layer is pretty fragile. You might want to use smaller pieces for smaller prints to avoid wearing out a larger piece just from printing small keychains. The bottom layer doesn’t seem to wear much, so you can cover the whole surface on the bottom and then use smaller top panels that don’t cover the entire print area.

Printing is about like you’d expect. The two sheets add quite a bit of thickness to your bed. I had to raise my print head about 2.5 mm. If your printer has an adjustment for this you can use that. If it autolevels, you might have to set a new offset, depending on what kind of sensor you have. You can also do what I do and put a negative offset in your G code (for example, G92 Z-0.20) to move the head 0.2 mm up.

Here’s the problem. Like BuildTak, the material will stick too well if the head is close. Using PETG plastic, my first attempt stuck really hard to the plate. Peeling the part off worked, but it also left tears in the very thin top surface. You are better off setting the offset very high and slowly lowering it until you get a good compromise.

The pictures below show a sleeping cat printed in PETG. The right-hand picture shows how the head being a little low left a permanent dent in the material and there is a small tear in the surface, too.

The PETG seemed to really stick hard. Using PLA was a little easier to dial in. The green piece below is PLA printed on a Monoprice mini with a magnetic bed. The other nice thing about PLA is you don’t need much bed heating to use it. There’s no doubt that when your thermistor says, for example, 70 C on the bed, the temperature on top of these multiple layers of material is going to be less. You may have to adjust accordingly. However, the material won’t tolerate high temperatures so printing ABS is probably not going to be good nor is it a good idea to drag the hot head too close to the surface. 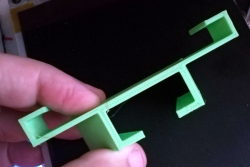 Is it worth the effort? I’m not sure. It certainly felt more finicky than just using a sheet of BuildTak. While the BuildTak and similar materials don’t last forever, they don’t seem to tear up quite as easily as the magnetic plate does. I also feel like the PETG was much harder to get that sweet spot where it sticks well enough but not too good.

I haven’t seen anyone selling just top sheets, but clearly, you will want a backup for the top sheet since it can easily get damaged. It would add to the cost, but I considered putting another layer of actual BuildTak on top of the top sheet, but I didn’t try it. It should work, though.

I also didn’t try more expensive magnetic sheets. It is hard to tell if they would really be made better of if they were just the same with a middleman’s markup added to them.

The good news is that when it did work, it worked great. PLA was very pleasant to just pop off. Of course, PLA releases well from BuildTak, too, so other than the novelty of removing the print, it isn’t clear to me this is really better. Then again, for PLA, it probably isn’t any worse either. For a $20 or so upgrade, it was not bad. Just don’t expect miracles.