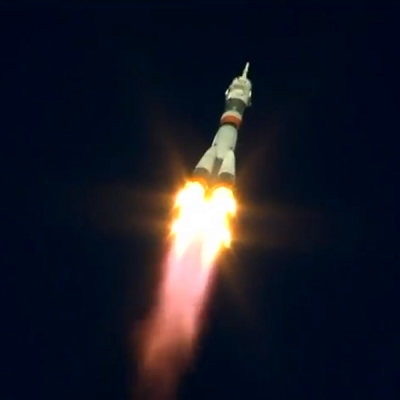 To anyone who’s watched Soyuz (or more accurately, the R-7 family of rockets which the Soyuz is derived from) launches in the past, it was immediately obvious that there was something wrong when watching the live stream of MS-10’s ascent. The four side mounted boosters are supposed to separate from the main stack and perform a synchronized back-flip maneuver, known as the “Korolev Cross” in honor of the R-7’s designer,  Sergey Korolev. But on the October 11th launch, instead of the careful aerial ballet that normally occurs, there was a cloud of debris behind the Soyuz rocket, and at least one of the side boosters was erratically tumbling through the air.

Immediately after the side boosters separated, violent shaking was observed inside the crew capsule, and the Soyuz automatically triggered the launch abort system and pulled the spacecraft from the booster rocket. It was clear to even the casual observer that the side boosters had failed to separate correctly and that doomed the rocket; but the question was why the booster separation, a maneuver the Soyuz has performed hundreds of times since the dawn of the space age, had failed this particular time.

As it turns out, the answer was easier to find than you might expect. Even though booster separation happens at an altitude of 50 kilometers (31 miles) and while the rocket is traveling in excess of 6,500 km/h (4,038 MPH), the Soyuz side boosters hit the ground largely intact. Investigators just needed to track down where the boosters came down in the Kazakhstan desert and examine them. Interestingly the boosters are not usually recovered after a nominal Soyuz launch, and it’s not unheard of for locals to cut them up and sell them for scrap.

During a normal separation residual liquid oxygen from the propellant tanks is vented out the side of the booster’s nose, which pushes it away from the rocket’s center core and starts the backflip maneuver. This is a simple and reliable method to put distance between the side boosters and the ascending rocket without relying on secondary rocket engines like the Space Shuttle’s SRBs, and utilizes a sensor in the booster which opens a nozzle near the topmost attachment point. But according to the investigation’s findings, the sensor was improperly installed and failed to trigger the oxygen vent.

In addition, a recording of the failed booster separation from onboard the Soyuz was publicly released on YouTube (failure occurs at roughly the 1:24 mark). The official release of this video is considered unusual given the relatively secretive nature of the Russian space agency, and has been seen to some as a way to appease international partners in an era of increased commercial space competition.

Echoes of the Past

If an incorrectly installed sensor causing the failure of a Russian rocket sounds familiar, it’s because this isn’t the first time it’s happened. In 2013, a Proton-M rocket carrying three GLONASS satellites dramatically failed just seconds into its flight. The rocket started to pitch over shortly after it cleared the tower, and despite obvious attempts by the vehicle’s automatic systems to correct for the variation by vectoring engine thrust, the rocket flipped over and powered itself directly into the ground.

An investigation determined the cause of the failure to be the improper installation of multiple angular velocity sensors. Despite the correct orientation for the sensors being clearly indicated and the fact that installing them incorrectly required physically bending the plate they were attached to, both the primary and secondary sensors were installed upside down. With invalid data being fed into the flight control system, the automatic attempts to correct the vehicle’s trajectory ultimately caused it to invert itself instead.

The loss of another rocket due to human error during assembly, this time with human lives aboard, has called into question the viability of the Russian space industry. With dwindling budgets and increased competition, critics point to these failures as evidence that corners are being cut in quality control to reduce costs.

With a clear cause identified for the MS-10 failure, investigators were able to disassemble the relevant sensors on the rockets currently under construction and verify the sensors had been installed correctly. While all of the other sensors checked were in working order, investigators have not yet revealed if they know the circumstances which lead to the improper installation of the sensor on MS-10.

In the meantime, another Soyuz rocket has already been successfully launched, and at least three more are slated to lift off before the next scheduled manned mission to the International Space Station on December 3rd. If all goes according to plan, the relief crew should arrive to the ISS before the current occupants need to depart, preserving humanity’s uninterrupted presence in space since the year 2000.