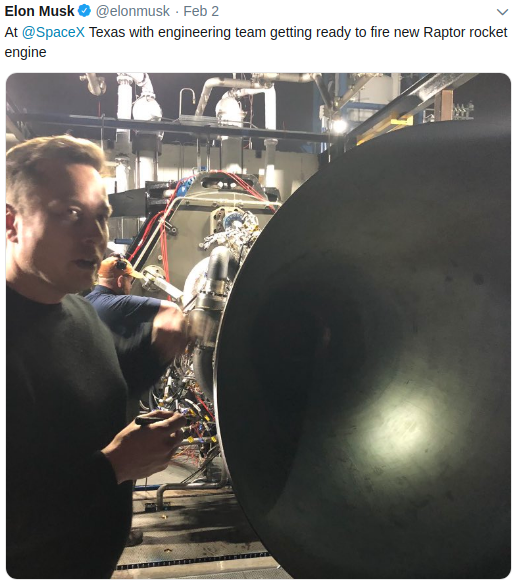 Many of the best known rockets to have ever flown have used engines based on what is known as the gas-generator cycle, including the Saturn V, the Soyuz, the Delta IV, and even the Falcon 9. In fact, outside of the Space Shuttle, you could probably argue that nearly every milestone in the history of spaceflight was made with a gas-generator cycle engine. It’s a technology that dates back to the V-2 rocket, and is one of the key breakthroughs that made liquid-fueled rockets possible. But despite its incredible success, the technology is not without its faults.

Put simply, the gas-generator produces the gasses that spin a turbine, which in turn drives the propellant pumps. In some engines, the gas-generator operates on a different principle than the engine itself and has its own separate fuel supply. For example, the turbine of the V-2 rocket was spun with steam created by the chemical reaction between hydrogen peroxide and warm sodium permanganate.

The downside of this method is that the secondary fuel system for the gas generator adds additional weight and complexity, the last thing you want on a rocket engine. The more modern approach, used in engines such as the Falcon 9’s Merlin, is to power the turbine by burning a relatively small amount of the same fuel and oxidizer as the primary engine. In this case, the gas generator is usually referred to as a preburner.

But if the preburner was given the same fuel and oxidizer as the engine itself, and at the same ratio, it would essentially just be a smaller rocket. The exhaust would be far too hot to run through a turbine. To get around this, the preburner is run on a fuel-rich mixture which leads to incomplete combustion and lower exhaust temperature.

The defining characteristic of what’s known as an open cycle engine is that the exhaust from the preburner gets dumped overboard as a waste product. In some rockets this unburned fuel can be seen as a black streak alongside of the otherwise bright exhaust plume. It’s never been a secret that there were performance gains to be had by closing the cycle, that is, capturing the preburner exhaust and feeding it into the engine’s combustion chamber. But the sooty exhaust produced from the unburned kerosene is unsuitable for recirculating through the engine. It ended up being easier to simply build larger rockets than try to capture this lost fuel.

In the 1950’s, Soviet scientists came up with something of a compromise. Instead of using a fuel-rich mixture in the preburner which produced an exhaust that couldn’t be safely recirculated into the engine, they experimented with running the preburner oxygen-rich. Unfortunately this idea solved one problem while creating another, as there was no metal that could survive the incredibly hot oxygen-rich gas produced by the preburner. In fact, American scientists had deemed it impossible, and believed claims that their Soviet counterparts were working on the concept to be Cold War propaganda.

Eventually the Soviets mastered the metallurgy required to build the turbine and developed several engines that operated on the oxygen-rich preburner concept. The exhaust was piped into the engine’s combustion chamber and recovered at least some of the propellants which would otherwise have been dumped overboard. The modern day Russian RD-180 engine, currently in use by the American Atlas V, is a continuation of this technology.

American engineers went in the opposite direction. They believed that a fuel-rich mixture in the preburner was possible and could be done with existing metal alloys, so long as hydrogen was used as the fuel instead of kerosene. This ultimately lead to the development of the Space Shuttle Main Engine, which to date remains the most efficient liquid fuel rocket engine ever flown. While the Space Shuttle has long since retired, a variation of the engine itself will go on to power the Space Launch System. It will be the most powerful rocket NASA has ever built and is slated to begin missions in 2020.

Either approach, whether it recaptures the oxidizer or fuel rich preburner exhaust, is clearly an improvement over dumping everything overboard. But neither is an ideal solution as there’s still potentially combustible products being wasted. Essentially the Soviet Union and the United States had both solved different halves of the same problem; to truly close the cycle, the fuel-rich and oxidizer-rich preburner designs would need to be utilized simultaneously in the same engine. 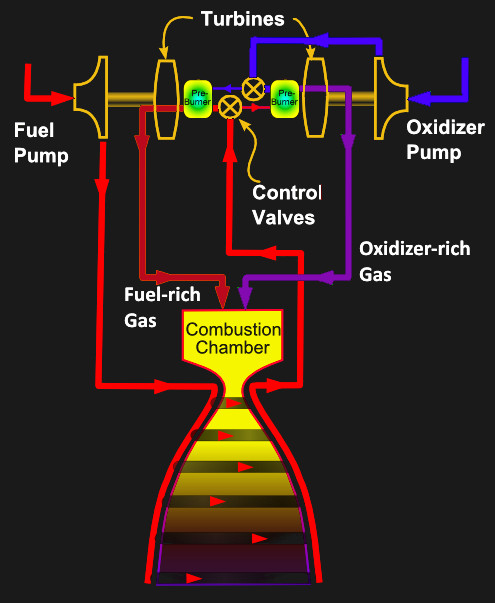 The logical end result is the full-flow staged combustion engine. Such an engine has two independent pumps for oxidizer and fuel, spun by two turbines powered by their own dedicated preburners. But unlike the gas-generator cycle which burns just a small amount of fuel and oxidizer in the preburner, in a full-flow staged combustion engine, all of the fuel and oxidizer is run through their respective preburners. In other words, the fuel is burned twice: once at a lower efficiency in the preburners to produce energy for spinning the turbines, and again at maximum efficiency in the combustion chamber to produce thrust. While an exceptionally difficult engine to design and test, it completely eliminates the waste of the gas-generator cycle.

But increased fuel efficiency isn’t the only advantage to this design. For example, the seals separating the turbine and the pump are less critical, as there’s no concern of contaminating the pumped liquid; ultimately they’re going to the same place. In addition, the fact that the fuel and oxidizer enter the combustion chamber as gasses further improves engine efficiency over conventional designs which spray them in as liquids.

The individual turbines on a full-flow staged combustion engine also tend to run cooler and at lower pressure than the single turbine used in a conventional rocket engine. This puts less stress on the turbine impellers, and should allow them to run for longer before they need to be inspected and replaced. Given SpaceX’s focus on reusability, this is likely seen just as important as the increased fuel efficiency.

The Wait is Almost Over

While it will be the first one to fly, the SpaceX Raptor isn’t actually the first full-flow staged combustion engine to be built. The RD-270 was completed in 1967 by the Soviet Union as part of their program to reach the Moon, and performed several static test burns. But after the United States landed on the Moon in 1969, effectively winning the Space Race, the engine (and the rocket it was meant to power) was canceled. Less complex, and ultimately cheaper, engines were used for the remainder of the Soviet space program.

In the 1990’s, the United States Government expressed an interest in the development of a domestic full-flow staged combustion engine. While there was promising turbine and preburner development by contractors Rocketdyne and Aerojet, neither the Air Force nor NASA chose to provide the funding that would have been required to complete the entire engine.

So when will Raptor finally become the first full-flow staged combustion engine to leave Earth? If you believe Twitter, very soon. Elon Musk claims a prototype of the Raptor-powered Starship will be making low-altitude “hops” around their test facility located near Brownsville, Texas within the next couple of months. Of course a lot can happen between now and then, so it’s entirely possible that date may slip. But even still, it seems like 2019 will finally be the year that the “Holy Grail” of rocket engines finally takes to the air. Here’s hoping its been worth the wait.

92 thoughts on “The “Impossible” Tech Behind SpaceX’s New Engine”