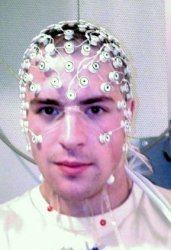 Keeping the Measurement on the Outside

When Hans Berger took the first human EEG in 1924, he built on 50 years of research about electrical brain activity in monkeys, dogs, and rabbits. It was known that placing electrodes directly on an animal’s brain produced signals that changed if, for example, you changed the light level in the room. Of course, you couldn’t pop the top on a human subject and wedge electrodes in their brain, so Berger had to be more subtle.

An EEG has several frequency bands where your brain produces repeating waves. The alpha band (8-15 Hz) occurs when relaxing or with eyes closed, for example. beta waves (16-31 Hz) occur when you are focused, alert, or anxious. You can find a nice table of the waves and what they seem to indicate on Wikipedia.

Here’s where things get tricky. If your brain produces, say, alpha waves when you are relaxed, can you impose alpha waves on your brain to make you relax? That idea is known as brainwave entrainment.

Entrainment is known to happen in regular systems. Christiaan Huygens reported in 1665 that several pendulum clocks in close proximity eventually synchronized. This is due to energy from each clock affecting the other clocks. When out of phase, the effect is negative. When in phase, the effect is positive, so over time, the pendulums are all in phase — you can see this effect (exacerbated by using a moving platform) in the video below.

The idea is that if you can impress sound waves at a particular frequency on your brain, it will cause your brain to sync up just like the pendulums in the video. This might sound silly, but EEG evidence seems to bear it out and it even has a name: FFR or frequency following response. This happens unintentionally sometimes. For example, music or chanting can produce changes in the EEG, presumably from this same effect.

One issue with trying to entrain brainwaves is that the frequencies of interest are so low. There are a few methods commonly used. One idea is binaural beats. Suppose you want the brain to get an 8 Hz signal. That’s hard to do with a sound card. But it is easy to send one ear a, say 250 Hz signal and the other ear a 258 Hz signal. The brain will mix these frequencies and you will hear an 8 Hz signal (along with the other two and a 508 Hz tone, too).

While it is a little scary to mess with your brain, you have to figure that just listening to some tones shouldn’t have much potential to mess anything up permanently. It’s a world away from inserting some electrodes in your brain, but we have looked at instances where external stimuli will have a lasting effect. Examples include how you perceive color after exposure to the McCollough Effect, and how flashing lights have the ability to trigger seizures in some people.

Pseudoscience, at Least for Now

I know, this sounds like pseudoscience. There have been some studies, but I don’t know of any that are solid and widely accepted by the mainstream scientific community. Still, it’s not inconceivable that external influences could sync up something in the brain. For example, light flashes can trigger seizures in some people. Certain kinds of music, chants, or drum beats are known to affect people in different ways. So the link between sound and your brain state isn’t that hard to imagine.

There is some evidence that when we talk to others our brains synchronize, which is another thing that sounds crazy but is apparently true. While it isn’t quite entrainment, scientists recently used similar techniques to let people communicate brain-to-brain by looking at LEDs flashing at different frequencies. The result was a multiplayer Tetris game where the players were mind-melded.

This is an area where a large coordinated citizen science effort could make some interesting and relevant contributions. Producing tones is easy. Here’s a generator for isochronic tones and another for binaural. It would be interesting to design a little experiment. For example, consider Web Sudoku. Sudoku is a fun game that is mentally challenging but pretty easy to learn. It would be interesting to try a few games with no entrainment, a few games with perhaps headphones in silence, and a few games with headphones and a concentration tone using one of the above generators. My first cut at a list of data to collect would be:

I set up a project for this on Hackaday.io. If you are interested, join and we’ll design some experiments and collect some data. Would the time of day matter? It seems like you’d use the “normal” plays as a baseline to see how variable your times are game-to-game. Share your thoughts here or on the Hackaday.io project.

The human body — and the brain in particular — is pretty strange. So this might work the way people think. Or it could be a placebo effect. I might be able to tell you that putting a copper coin under your armpit will improve concentration and because of the placebo effect, it just might. Or perhaps it is just baloney.

However, you have the tools to find out if it works for you, even if you can’t prove why it works. There are plenty of ways to wire up an EEG, by the way, if you want to be even more rigorous. We’ve even seen a doggy EEG recently.

15 thoughts on “Brain Hacking With Entrainment”