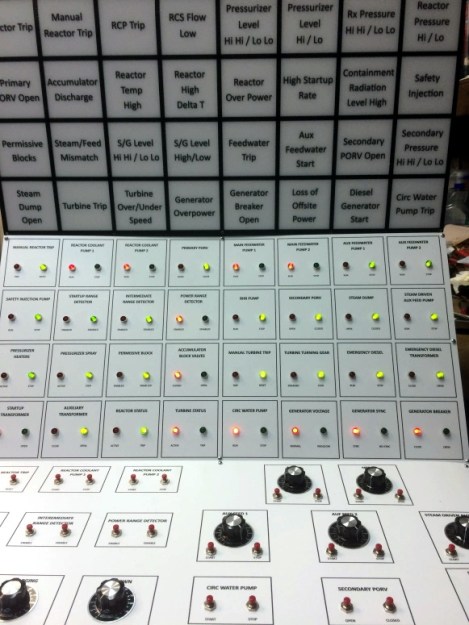 To play the game, if one can call it that, you must keep the virtual reactor going at peak performance for as long as possible. Sounds easy? You’ll also have to avoid making procedural mistakes and deal with randomized fault conditions. Did your plant just lose its outside source of power? Turbine just go offline? You better know which buttons to push, and when.

But the software is only part of the equation. Just as flight simulator aficionados build physical cockpits for their digital aircraft, [Mark] has built an incredible control panel for his NuclearPi. It includes an absolutely dizzying array of annunciators, indicator lights, buttons, and knobs. Everything is connected to the Pi through four 32 channel I/O expanders from AB Electronics UK, but even with a whopping 128 channels available, he still had to use some 7404 gate ICs to make everything fit.

The control panel has gone through several hardware revisions over the last couple years, as he finds what does and doesn’t work. At one point [Mark] was using 6.3V incandescent bulbs. Not great, not terrible. But he since switched the whole board over to 12V, with an array of relays for delivering power to the appropriate annunciator. We’d love to see, and hear, this thing in action.

But perhaps the most impressive element of this project is just how long [Mark] has been working on it. He described the initial version of the simulator in the March 1984 issue of 80 Micro, a magazine for TRS-80 owners. A full two years before the explosion of Reactor No. 4 at Chernobyl demonstrated the complexity of nuclear power to the general public, he was tinkering with his own virtual version using a string of Christmas lights and a 1.78 MHz processor.

Looking at the final simulator as a stand-alone project, it’s impressive enough. But to see a project with such a long and storied history is truly something special. While the individual tinkerer might never be able to build their own reactor, [Mark] has proved that at least the experience of having a home nuclear reactor is not outside the realm of possibility.