For anyone that’s ever been broken down along a remote stretch of highway and desperately searched for a cell signal, knowing that a constellation of communications satellites is zipping by overhead is cold comfort indeed. One needs specialized gear to tap into the satphone network, few of us can justify the expense of satellite phone service, and fewer still care to carry around a brick with a chunky antenna on it as our main phone.

But what if a regular phone could somehow leverage those satellites to make a call or send a text from a dead zone? As it turns out, it just might be possible to do exactly that, and a Virginia-based startup called UbiquitiLink is in the process of filling in all the gaps in cell phone coverage by orbiting a constellation of satellites that will act as cell towers of last resort. And the best part is that it’ll work with a regular cell phone — no brick needed.

The idea behind UbiquitiLink’s plan to fill in the dead zones is simple, and it’s based on the fact that space really isn’t as far away as it seems; if you could somehow drive straight up, low Earth orbit is only a couple of hours away. The satellites that will form the backbone of the UbiquitiLink network will be in a somewhat higher orbit — around 310 miles (500 km). Still, that’s not really all that far away (at least in terms of radio frequency propagation) over a path that is, for the most part, free from the attenuation caused by terrestrial obstructions. 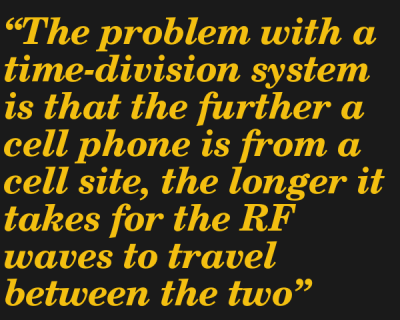 UbiquitiLink has done the math and calculated that off-the-shelf phones have just barely enough RF oomph to connect to a satellite over a line-of-sight path, making a network of orbiting cell towers at least plausible. Making that practical is not just a matter of power, though. Some software trickery will be involved on the terrestrial end.

The problem with a time-division system is that the further a cell phone is from a cell site, the longer it takes for the RF waves to travel between the two. Even at approximately the speed of light, the delay can be enough for one timeslot to overlap into another. This requires a synchronization step that determines how far the phone is from the base, and if the phone is far enough away — about 35 km, or 22 miles — the signal will actually arrive too late for its assigned time slot. Even though the transmitter in the phone may have the power to cover more than 35 km, signals from that far away will be unceremoniously dropped.

This would seem to preclude the use of orbital cell sites, which will always be an order of magnitude further away than the furthest allowed connection. However, UbiquitiLink has patented a technique that amounts to false advertising on the part of the satellites. TDMA networks use a timing advance signal to tell the mobile phones within the cell how far they are from the base station, which in turn is used by the phone to retard the timing of its transmission so its signal arrives at the right point in the timeslot. Since it’s up to the base station to send the timing advance, UbiquitiLink’s orbital cell sites simply send a constant value corresponding to a tower that’s only 20 km away. The phone thinks it has locked onto a weak tower, but that’s OK.

UbiquitiLink’s modified cell tower software also has to adapt to the Doppler shift caused by the platform’s high speed. But aside from that, the orbital cell sites are pretty much the same hardware and software that would be installed on a terrestrial tower. The backhaul connections between different orbital cell sites and between the satellites and the ground will obviously be wireless, but in almost every way, the UbiquitiLink network will just be a constellation of minimally modified cell towers launched into orbit supporting bog-standard cell phones on the surface.

Out with the Trash

Initial testing of the TDMA version of this system occurred after a test system was sent up to the ISS on a Commercial Resupply Service (CRS) mission in November of 2018. The following February, before loading the Cygnus supply spacecraft with their garbage, ISS astronauts assembled and tested the UbiquitiLink test platform. The spacecraft deorbited and burned in the atmosphere, but not before a solid two weeks of orbital testing time. UbiquitiLink was able to connect cell phones in New Zealand and on the Falkland Islands to the test platform, confirming that their software changes work.

Further tests are scheduled for this summer, with another test platform delivered to the ISS with the CRS mission that flew to the ISS in late June. This time, the Cygnus will have an extended duration mission, giving UbiquitiLink up to six months to test their system. Assuming all goes well, this will open the door for launching actual operational satellites.

Like Starlink and other microsatellite concerns that want to provide saturation connectivity from on high, UbiquitiLink plans a constellation of thousands of satellites that will cover most of the surface of the Earth. But they believe with even a small constellation of perhaps a half dozen satellites, users will still be in range of a signal every few hours. It’s not enough for a phone call, of course, but it would be enough to get a couple of texts through, which could be all it takes to get aid in the backcountry or in the middle of the ocean. And the possibilities for supporting really remote IoT sensors and systems are endless.

It remains to be seen how well UbiquitLink’s system will work, and whether it will survive in a crowded marketplace of space-based wireless providers. But by freeing users from the need to buy any special hardware, the company may well have given themselves a competitive advantage over everyone else.

53 thoughts on “The Satellite Phone You Already Own: From Orbit, UbiquitiLink Will Look Like A Cell Tower”