All batteries work the same way. There are 3 components: an anode, a cathode, and an electrolyte. A chemical reaction between the electrolyte and the electrodes (the anode and cathode) creates ions near one part of an electrode and electrons on the other, giving the two terminals a difference in potential. The two electrodes are made of different materials. The anode is graphite bound to copper, and the cathode is some lithium crystal bound to aluminum. The electrolyte is a sort of insulator, so the electrons are better off going through the circuit from one electrode to the other than to make an internal short. Once the reaction is complete, the battery is dead, and the reaction won’t happen unless there’s a path for the electrons to move (aka a closed circuit). To charge a battery, the process is reversed, and power applied to the electrolyte undoes the chemical reaction. Not all electrolytes are created the same, however, and the chemistry of a non-rechargeable battery means that it can store more energy, but applying power in reverse doesn’t undo the chemical reaction.

It’s best to maximize the battery by taking advantage of surface area, so the anode/electrolyte/cathode sandwich benefits from being as thin as possible with lots of area touching. Also, the sandwich has a few more slices of materials with porous layers between them to allow ion transfer without allowing material migration. Now take your battery sandwich and put a bunch of them together in a stack with separators, and you have either a pouch battery (cheap cell in a silver casing), a prismatic battery (fancy cell that you’d find on a laptop), or roll it into a small tube and you have a cylindrical battery (like the 18650 or AA).

You may have seen the news recently about Tesla’s Million Mile battery. It was actually a group of researchers from Dalhousie University in Halifax, Canada under contract with Tesla, but they did a LOT of testing of a variety of Li-ion batteries to find the best chemistries and use profiles and charging profiles. The million mile battery is just a good PR term to describe the research that optimized some battery formulations and resulted in much longer lifetimes. The full paper is filled with technical jargon, so I spent the weekend learning all about batteries in order to distill it here. You’re welcome.

The first thing to note about their million mile formula is that it doesn’t represent most current drivers that identify as average commuters. Rather, they’re targeting the use cases that will use the vehicle almost constantly and charge when the battery is empty. This would be for long-haul semi trucks, taxis, and buses. Their term was 100% DOD, or Depth of Discharge, where they run the battery all the way to empty before charging it back up again, unlike a cell phone which is usually plugged in every night no matter the state of charge. 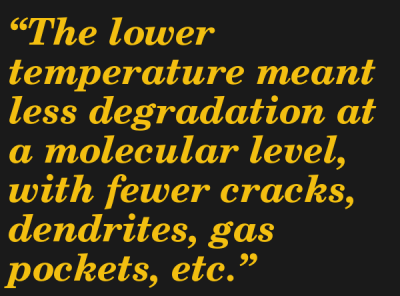 The research team spent a lot of time in previous studies looking at other chemistries, but had primarily settled on NMC532/graphite as their electrodes (as has most of the research community). In chemistry terms, NMC532 is another name for LiNi0.5Mn0.3Co0.2O2, and in lay-speak it means the cathode is mostly lithium crystals, with a sprinkling of nickel, manganese, cobalt, and oxygen, and the anode is graphite (though research into graphene is promising).

Calling the battery NMC532/graphite isn’t quite sufficient, though. You still need to specify an electrolyte. The electrolyte is a slurry of LiPF6 and solvents and additives with fun names to say out loud, like dimethyl carbonate and ethylene sulfate. In this study they tried out a few combinations of solvents. The additives can also change the performance of the cell, giving it a higher charge/discharge rating at the expense of overall lifetime, or vice versa. Based on previous studies, they were really excited about 2 different additive formulas (2%FEC+1%LFO, and 2%VC+1%DTD), though they discovered that the two had different performances at different temperatures, so they suggested that the choice of additives could be application-specific. In the production of cells, usually the dry packs are manufactured, and then the wet electrolyte slurry is injected. See Sparkfun’s tutorial tour through a manufacturing plant for a visual story of the process.

With this special formula, and maintaining a low temperature, they were able to minimize the two main things that cause degradation of a battery; lithium inventory loss, and increased impedance. Generally, over time the lithium ions move around and eventually get themselves into locations that aren’t helpful for the battery. They can get electrically isolated, they can group together into plates and dendrites and surface films, and they can react with other components of the cell and become unavailable for charging/discharging. The dendrites are particularly bad because these sharp little lithium needles can pierce the separators, causing a short circuit in the cell, which then heats up and causes a runaway reaction that ultimately explodes. Impedance is increased through electrode corrosion or just in general less surface area being available, either through reactions or cracking or resistive surface layers forming and blocking the electrode.

One of the reasons this study got so much attention is that is was thorough and entirely open. It took them 3 years, running thousands of cycles on each battery, with extremely accurate chargers and dischargers to record the capacity, to get the most complete data they could. Usually accelerated lifetime testing on batteries is difficult, as it’s still putting the battery at higher charge/discharge rates than expected in real life, with less recovery time, so the fact that they put so much time into this testing means the results are more realistic. They also specifically said:

Full details of these cells including electrode compositions, electrode loadings, electrolyte compositions, additives used, etc. have been provided in contrast to literature reports using commercial cells. This has been done so that others can re-create these cells and use them as benchmarks for their own R+D efforts be they in the spaces of Li-ion cells or “beyond Li-ion cells”.

Despite its openness, we probably won’t be seeing homebrew Li-ion batteries soon (but we’d love to cover it if any of you try). From the battery application community we may be seeing battery chemistry change towards the formulation suggested, and we’ll likely see a lot more attention paid to cooling, as that significantly improves their life. And we’re pretty certain that if you want a battery pack, Tesla will soon be happy to sell you one of theirs from their gigafactories.

Author’s Note: Some people pointed out that I used the term LiPo when I should have used Li-ion. They were, of course, correct, and I’ve updated the article accordingly.