Setting Up the Equation

So what’s the method? You watch Loh explain it himself in the video, below. Suppose you have a standard quadratic equation for whatever reason that looks like this:

In this case, A=1, B=-6, and C=3. Note that for Loh’s method to work, A should equal 1, but if it doesn’t you can always divide both sides by A to make that true. For example, consider this equation:

It will have the same roots as the first one because if you divide both sides by 3, you get the first equation.

To factor a polynomial into two binomials we can use FOIL (First/Outer/Inner/Last). So we know that:

Where we just made up S and R. They exist, but we don’t know what they are yet. However, for the answer to be zero, you can see that the equation will be zero when x=S or X=R so that means S and R are the roots of the equation.

It sounds silly, but let’s multiply out the binomials into another polynomial. Remember FOIL:

If you look at that for a second, you will probably realize that S times R must be 3. We also know they add up to 6. At this point, you can probably just guess the roots, but let’s make it formal.

Do the FOIL method again and get:

The middle terms will always cancel out so you get:

Subtract 3 from both sides and add z squared to both sides:

The Key and the Catch

The point is, none of this was hard to remember or work out. Just remember that you rewrite the zero as (x-S)(x-R) and the rest follows very logically.

The only real problem is not many quadratic equations have A=1. For example, suppose you throw a ball straight up from 5 meters above the ground with a velocity of 15 m/s. We want to know when the ball will hit the ground.

Gravity is going to pull down on the ball at about 4.9 meters per second squared (assuming gravity accelerates at -9.8 m/s2). The physics formula is (at2)/2 so we get our first term of -4.8t2. The second term will represent the speed of the ball which is simply 15t. We also started 5 meters above the ground, so we will add 5 and wind up with:

This formula will tell you where the ball is assuming you throw at t=0. We want to know when it hits the ground so that will be one of the roots:

To use the new method, just divide it all through by -4.8 to get: 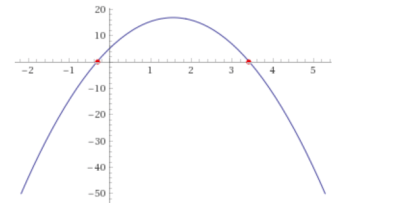 If you don’t trust our work, ask Wolfram Alpha or plug 3.4285 back into the original formula. Wolfram says 3.43 and the check your own work says 0.005 meters at that time, so given that I rounded a few times, that’s pretty close. Besides, I’m ignoring things like air resistance. This specific calculator says 3.36 seconds, which is still pretty close.

If you prefer things in algorithmic steps, here you go:

Everything Old is New Again

We get it. Many people may have figured this out before. But if they did, they apparently forgot to share it with anyone in any permanent form. If you read the actual paper, you’ll see how easy it is to symbolically derive the “old” standard formula. Compare that to the traditional method. If you read the proof, it seems simple enough, but go back in a few weeks and try to work it out yourself. Not so easy. This is also much easier to remember even if you don’t want to derive it every time.

Of course, making A=1 is part of the trick. It is well known, for example, that the product of the roots of a quadratic is C/A. Since we know A=1, it follows that the product of S and R are also C, using this method. Normalizing A to 1 is also an old trick and is sometimes called a reduced quadratic equation. However, it doesn’t look like anyone put all the pieces together until now.

If you don’t like Wolfram Alpha, there’s always Mathics (hint: use Solve[-4.8t^2+15t+5==0,t]).  There are also specific calculators. Or just bite the bullet and keep everything in a Jupyter Notebook.