We can’t tell if the Eelume actually exists, or if it’s just a good CG and a design concept, but when we saw the video below, we wanted to start working on our version of it immediately. What’s an Eelume? A robotic eel that lives permanently under the ocean.

If you have to take care of something underwater — like a pipeline — this could be much more cost-effective than sending divers to the ocean floor. We liked the natural motion and we really liked the way the unit could switch batteries and tool heads. 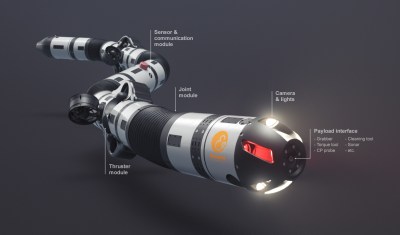 We do have some questions, though. How do you get rid of one battery and pick up another? There would have to be some battery capacity that doesn’t exchange, but that’s not very efficient since the new battery would have to recharge the internal battery. Perhaps you can add batteries at either end. Some of the still pictures don’t clearly show how the batteries fit in, although they do show the flexible joints, sensors, cameras, and thrusters, which are all modular.

According to the web site, tools can go on either end and there’s a robot arm. The device can apparently shape itself like a U to bring both ends to bear on the same area. Generally, we like robots that mimic nature, but this is one of the best examples of that being practical we’ve seen.

There’s a video on the site of what appears to be real hardware tethered in a swimming pool, though we couldn’t tell how much of the device was subject to remote control and how much would be autonomous. Communicating underwater is finicky and usually requires either an antenna on the surface or a very low frequency (and, thus, not much bandwidth). While completely duplicating this would probably be a feat, it might inspire some hacker-friendly eels.

A lot of underwater vehicles seem to emulate biologic life. Shape-wise we had to remember [Alex Williams’] award-winning underwater glider, even though it doesn’t undulate.