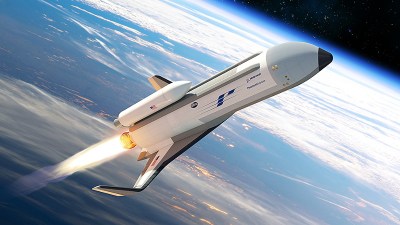 A Scaled Down Shuttle

Launching like a rocket and landing like an airplane, one might assume the XS-1 Phantom Express to be something of a miniature Space Shuttle. Indeed there are similarities between the two craft, and there’s no question that lessons learned from the development, manufacture, and operation of the Shuttle fleet were taken into account. Realistically, if anyone is designing a spaceplane and doesn’t at least refer to the mountain of data NASA has accumulated on the subject, they’d be doing themselves an incredible disservice. 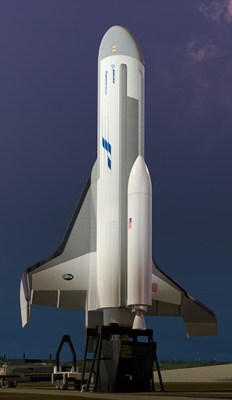 But there are some fundamental differences between the two vehicles that make it difficult to compare them directly. For one, even conservative math would put the payload capacity of the Shuttle at least 12 times that of the XS-1. This naturally meant less thrust would be required to get the vehicle off the launch pad, so the XS-1 didn’t need an external propellant tank or strap-on boosters. The vehicle’s single Aerojet Rocketdyne AR-22 engine and all of the propellant required for the mission would be contained within the craft’s roughly cylindrical fuselage.

That meant the XS-1 would land in the same condition it was in when it took off; an extremely important detail with regards to rapid reusability. On each Shuttle mission the external propellant tank would burn up in the upper atmosphere and the solid rocket boosters, while technically reusable, would need to be fished out of the ocean by a separate recovery team and go through a lengthy refurbishment process.

In comparison, the XS-1 would have only required a thorough inspection and refueling between missions. This level of aircraft-like reusability is the ultimate goal of several “New Space” companies such as SpaceX and Rocket Lab, as it promises to completely revolutionize how we utilize Earth orbit.

Even still, space is hard. While one could logically conclude that the cost and complexity of a space launch system has a fairly linear relationship with its payload capacity, even the smallest orbital rockets are technical marvels that navigate a razor-thin line between generating useful thrust and self-annihilation. Maintaining that delicate balance all the way to orbit is exceptionally difficult no matter how large or small the craft is. Which is exactly why the XS-1 was never designed to go that far.

While the XS-1 might have the outward appearance of the Space Shuttle Orbiter, in operation it would have been much closer to the first stage of a Falcon 9 rocket. It would accelerate the payload up to hypersonic speeds, ideally as high as Mach 10 according to a DARPA program overview, and carry it up to the edge of the Earth’s atmosphere. But it wouldn’t have had the energy to actually take the payload all the way to its final altitude, let alone enter orbit itself.

Once the XS-1 reached apogee, it would release a dorsal-mounted payload module. This module, itself essentially a small rocket, would continue the mission independently. Already traveling at high velocity through the thin upper atmosphere, it would be able to push the payload the rest of the way “up the hill” and into orbit with a comparatively low-thrust engine.

With its primary mission now complete, the XS-1 would begin falling back down to Earth on a sub-orbital trajectory. Reentering the atmosphere at relatively low velocity, only minimal shielding would have been necessary to survive aerodynamic heating. After being slowed to sub-sonic speeds by air resistance, the craft’s delta wing and over-sized control surfaces would give it the cross-range capability to glide back to the launch site.

Even before they managed to send one of them into space, engineers were already trying to design a hybrid vehicle that would combine the power of a rocket with the more docile flight characteristics of an airplane. The Space Shuttle proved that the idea could work in the real-world, but so many concessions had to be made that it’s difficult to really call it a success. While a technical triumph in its own right, the winged Orbiter never delivered on its promise of cheap and rapid access to space. In fact, one could argue it did the exact opposite.

Today, SpaceX has shown that you don’t need wings to make a reusable rocket. While they’re still a long way off from daily flights, they’ve achieved a reflight cadence equal to that of the Space Shuttle program at a fraction of the cost. Even so, winged spacecraft have an undeniable appeal to engineers and futurists alike.

Companies like Virgin Galactic and Sierra Nevada are pushing ahead with their own versions of the concept, though of course its still far too early to say if they’ll be any more successful than the Shuttle was. In any event, while the XS-1 Phantom Express will likely go down as yet another in a long line of “paper rockets” that never left the drawing board, it’s safe to say that the dream of a practical spaceplane is alive and well.

12 thoughts on “Phantom Express: The Spaceplane That Never Was”