Join us on Wednesday, April 29 at noon Pacific for the Citizen Science Hack Chat with Ben Krasnow!

For most of human history, there was no such thing as a professional scientist. Those who dabbled in “natural philosophy” were mainly men — and occasionally women — of privilege and means, given to spend their time looking into the workings of the world. Most went where their interest lay, exploring this facet of geology or that aspect of astronomy, often combining disciplines or switching to new ones as they felt like it. They had the freedom to explore the universe without the pressure to “publish or perish,” and yet they still often managed to pull back the curtain of ignorance and superstition that veiled the world for eons, at least somewhat.

In their footsteps follow today’s citizen scientists, a relatively small cohort compared to the great numbers of professional scientists that universities churn out year after year. But where these credentialed practitioners are often hyper-focused on a particular sub-field in a highly specialized discipline, the citizen scientist enjoys more freedom to explore the universe, as his or her natural philosopher forebears did. These citizen scientists — many of whom are also traditionally credentialed — are doing important work, and some are even publishing their findings in mainstream journals.

Ben Krasnow, the proprietor of the Applied Science YouTube channel, is one such citizen scientist, and one whose latest findings are always welcome. We’ve covered tons of Ben’s experiments and builds, from his DIY electron microscope to his steel-piercing ruby laser, and more recently his home-brew mass spectrometer or his investigation into MRI-induced iPhone deaths. There’s always something interesting coming out of Ben’s lab, and he’ll drop by the Hack Chat to discuss the state of citizen science today and what’s going on in the lab.

Our Hack Chats are live community events in the Hackaday.io Hack Chat group messaging. This week we’ll be sitting down on Wednesday, April 29 at 12:00 PM Pacific time. If time zones have got you down, we have a handy time zone converter. 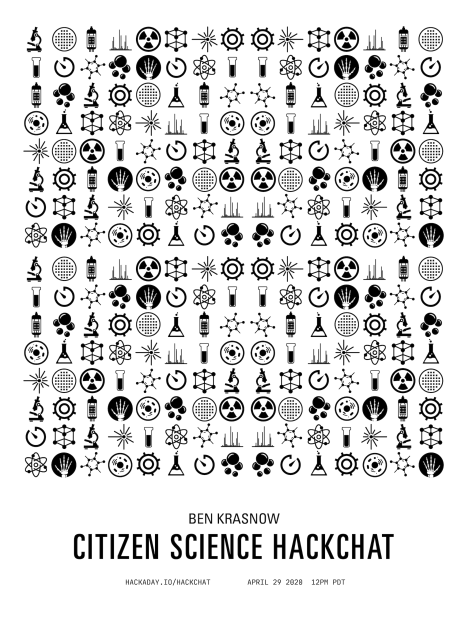