When the first Bantam Tools’ Milling Machine landed, it put PCB prototyping at the forefront with a smooth software and hardware pipeline for spinning out circuit boards in a manner of minutes. Now the folks at Bantam Tools are back, putting those insights into a new machine that makes cutting aluminum a first class feature. While machine details are still sparse from their announcement page, knowing that Bantam Tools has spent a few years turning classrooms of students into hardware prototypes reassures us that we’re in good hands. Now let’s spill some beans on this beast.

A Big Shift in the Construction

The heritage of this machine goes back a few years to the Other Machine Company’s design known as the Othermill. It was designed from a compact structure made from HDPE. Doing so made the machine fairly lightweight and easy to manufacture from large sheets with subtractive tooling, not to mention giving it an adorable A+ lunchbox aesthetic. In 2017 Bre Pettis — a founder of MakerBot and investor in Glowforge — bought the company, changing the name to Bantam Tools and shifting the focus to professional desktop milling.

Today’s offering — officially called the Bantam Tools Desktop Desktop CNC Milling Machine — grows the work region to a full 3″-by-9″-by-7″. The change calls for stiffer construction, and the design team has spared no expense at opting for thick steel linear motion components installed into a rugged aluminum frame. Just like the previous model, Bantam Tools’ new machine will get a full enclosure, making it classroom and office friendly. 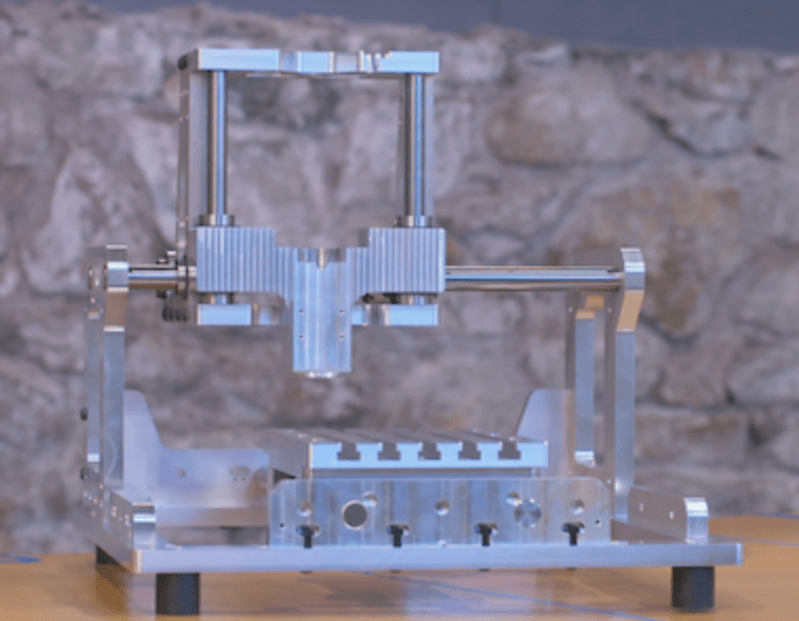 Taking a closer peek at the construction itself, the machine frame borrows the T-slot technique from rapid prototyping with flat panels of laser cut components. However, unlike laser cut plastic joints, an aluminum frame should be more than enough to resist any stresses on these joints from everyday operation. This construction also has us suspecting that the machine is squared up and aligned with separate fixtures by the folks on the factory floor. In this setup the precision of the machine comes from the assembly process using references, rather than the precision of the machine that made the parts, which keeps the components simple and the fabrication expenses down without compromising on the machine’s ability to make precise parts.

Let’s be frank. Cutting Aluminum is hard, especially at high speeds with tiny tools. Without some serious consideration of our cutting tool’s feeds and speeds, we can easily be left with a big pile of broken bits, a smaller pile of metal chips, and a never-to-be-finished part. But fear not. In the last few years, Bantam Tools took the complex precision process of milling two layer circuit boards and simplified it with a streamlined software workflow. How? Encapsulation.

By delegating more and more of the machine behaviors to software and accepting a variety of common file formats, the resulting machine could be used easily by both novices and experts. As more of us become generalists, encapsulation is key. It helps those of us who aren’t milling every minute of the day to be almost as capable at partmaking as those who mill day in and day out.

With the arrival of their new model, Bantam Tools promises a new set of software tools keen on doing the exact same thing. And features like their 2.5D Auto Cam, which turns 2D SVGs into toolpaths, speak exactly to this principle of user simplicity. I’m confident that their prior experience can take a number of key elements that make cutting aluminum so tricky and simplify them, hiding the complexities and providing a great overall user experience.

An even more Capable Garage, Office, and Hackerspace

As eager onlookers, we’ve had the pleasure of watching Bantam Tools grow their hardware capabilities from the early days of the MTM-Snap prototype, to hearing about the joys and woes of bootstrapping a hardware startup, to hearing early success stories as a PCB Prototyping machine, to their latest name change. I continue to have that same eagerness at seeing new design from a crew that packs giant dreams into tiny machines. But what do you think? Let us know in the comments.