How’s the Weather Up There?

Despite seven decades of exploration that have seen over 5,200 pairs of boots across its summit, Mount Everest remains very much a climatological mystery. There has never been a permanent weather station at the summit, in part because of the technical challenges that building and installing such a device entails. What little we know of conditions at the summit come by way of portable instruments lugged up by expeditions, with the deadly conditions up there making it impossible to stay around long enough to gather much more than a few readings of wind speed, pressure, and temperature. In addition, almost all Everest summit attempts occur during a very brief window lasting only a few weeks to as little as a few days out of every year. 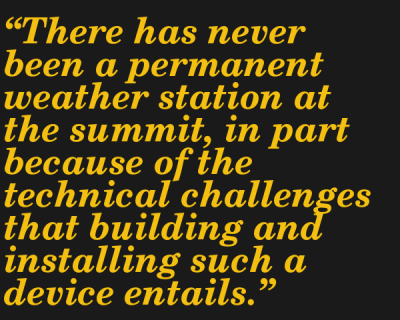 The need for a permanent weather station on Everest is not just driven by the demands of adventure seekers. The Himalayas stand in a unique position to act as sentinels for a changing climate. By some estimates, nearly a quarter of the world’s population gets their drinking water from the glaciers nestled in and around the Himalayas, and knowing how those ice packs are responding to rising temperatures is critically important. But with so few weather stations above 5,000 meters, climatologists have to rely on remote sensing to build a picture of what’s going on up there, and a skewed one at that.

There’s another bit of serendipity with the peak of Mount Everest: it actually reaches high enough to penetrate into the jet stream, those high-velocity air currents that meander around the globe. This partly explains the characteristically bad weather and high winds on the summit of Everest, the bane of most explorers. But jet stream winds also reveal a lot about the air masses that they typically form the boundary of, and hence are valuable tools for studying the climate. Jet stream winds are generally studied through the use of weather balloons, which can obviously only send back limited data. Having a permanent weather station sitting where it can directly monitor the jet stream will prove to be invaluable to climate researchers.

Having established the need for a network of Everest weather stations, The National Geographic and Rolex Perpetual Planet Everest Expedition took up the non-trivial task of designing equipment that was up to the extreme conditions on the mountain. This would be an installation like no other, more akin to designing instruments for a space mission than for monitoring terrestrial weather. Even the most durable of commercially available, scientific-grade weather stations would pale by comparison to what the Everest summit stations would require.

The comparison to space exploration is apt on a number of levels. First, weight is a primary concern, since every gram of material used to build the station, plus all the tools and hardware needed to install it, would have to be lugged up the 8,800-meter peak using nothing but muscle power. That meant that the station would have to be broken into pieces to spread the load over multiple climbers. Also, just as a planetary spacecraft is repeatedly tested to ensure it will survive the forces of launch and landing, so too would the station have to be tested to ensure its survival in some of the harshest weather conditions this planet can dish out.

Another way the engineering of the weather station is similar to space exploration is in terms of power and communication. The Everest weather stations would need to be completely self-contained, which as a practical matter means solar power. That presents special challenges: a solar panel is large, flat, and offers a lot of sail area to the wind. What’s more, solar panels are notoriously fragile, and the winds on Everest are known to pick up chunks of gravel as they whip around. A solar power system would need to be built to survive this constant peppering with rocks. Also, the weather can be cloudy for weeks at a time on the summit, so a battery to store energy would also be required.

For communication, the Everest weather station took another page from the spacecraft engineer’s playbook: redundancy. Data from the station would have to be sent wirelessly, and so it was provided with redundant transmitters. In addition to the prominent high-gain Yagi antenna for the 400-MHz instrumentation and scientific measurement (ISM) band, which talks back to the weather station at the base camp, the summit station also supports data transfer via a Thuraya FT2225 M2M L-band satellite terminal.

Finally, in an environment where wind speeds can exceed 290 km/h (180 MPH), the station has to be able to be literally bolted down. The exact mounting location couldn’t be easily surveyed in advance, so the legs and feet of the station were made adjustable for angles up to 50°. In addition to having its feet bolted to the rock, the mast was provided with adjustable guy wires, again to be bolted to the rock, to keep the instrument mast secure and to keep the directional antennas pointing in the right direction.

After extensive testing by the manufacturer, Cambell Scientific Instruments, on New Hampshire’s Mount Washington, where the highest-ever wind speed was recorded (317 km/h, or 231 MPH), the five weather stations were shipped to Nepal in time for the spring 2019 climbing season. The team honed their installation procedure on the four lower-altitude stations before attempting the final assault on the summit station.

The expedition team was far from alone. The Nepali government had issued a record number of climbing permits in 2019, which resulted in over 700 climbers converging on the mountain for the 2019 season. By the time the team had made it to the South Col camp, the traditional last stop before attempting the summit, they were at the back of an enormous traffic jam of climbers desperate for their chance to stand on the summit, however briefly.

This paradoxical crush of humanity on the way to one of the least accessible spots on the planet presented a huge risk to the team. While getting a few seconds on the summit for a selfie was the goal of the hundreds of climbers in line ahead of them, the team would need something like three hours to install the weather station. They faced a tough choice: attempt the summit and face the possibility of having not enough oxygen bottles and not enough room to work, or settle for a spot lower down the mountain. They opted for the latter and selected a spot on the Southeast Ridge known as The Balcony, at 8,430 meters above sea level, that gave them the time and the room to work, while only being 450 meters shy of the summit.

Once the team selected the site for the station, they quickly ran into trouble. First, the batteries they brought along to power the cordless hammer drills needed to bolt the station to the rock were too cold to work. Warm armpits under thick mountaineering jackets thawed the batteries enough to get on with the work, but it soon became apparent that the very thing that made lugging everything up the mountain possible — the ability to break the station into separate parts — also caused them to leave a critical part behind. The masts to hold the wind sensors — arguably the most critical instruments in the station — had gone missing.

Even on the Roof of the World, hackers rule, and a solution to the expedition-ending problem was soon found. By an incredible stroke of good fortune, the team discovered that the handles of the lightweight aluminum snow shovels that they had brought along were about the same size as the missing parts. A Sherpa set to the task of disassembling the shovel and hammering the handle into submission, while the universal problem solver — duct tape — was applied to improve the fit. The fixes worked well enough to bolt everything down and power up the station to confirm it was operating before heading back down the mountain.

The Balcony station sent data back to the NGS for about nine months before something happened to knock it offline. It’s not clear what caused the failure; the rest of the lower altitude stations are all still sending back data, so it’s something specific to the Balcony station. The station went offline in January, so it could be that the hacked instrument masts weren’t up to the fierce winter winds and were ripped off. Or perhaps the solar panels were destroyed by wind-borne gravel, or even fouled by some bit of cast-off climbing gear. The route up to the summit, after all, is not exactly pristine.

Unfortunately, the only way to be sure what happened to the Balcony station is to visit it, and while that should have been possible during the 2020 climbing season, the COVID-19 pandemic had other ideas. Nepal canceled all permits to climb the mountain in 2020, and access from the Chinese side has always been limited. A Chinese survey team did summit in May of 2020, but they approached along the Northeast Ridge, a route that didn’t pass anywhere near the balcony.

With the climbing season now closed, the fate of the highest weather station in the world will remain a mystery until at least the spring of 2021. Hopefully it’s still up there, and can be brought back online with a simple fix. But the fact that it got up there in the first place and that it worked for nine months is a testament to the engineering that went into the whole effort.