As it turns out, measuring sea level with a ruler isn’t that far off — but professional oceanographers have really nice ones called tide gauges, which live in aptly-named tide houses. The simplest tide gauge is a long tube sitting in the water, anchored in place. The tube has small openings below the water level that allow water to flow in and out. Also referred to as a stilling well, this device averages out small movements and waves, allowing for a much more calm and accurate measurement against a series of graduations inside the tube.

Of course, manually making all these measurements is tedious work, and today there are computerized methods for recording tide levels. Even so, some tide houses had automated recording systems as early as 1830. These systems consisted of a float in the stilling well, which moved a “pen” by way of rope and pulley. Every six minutes, the pen would mark the tide level on paper, much in the way an old seismometer works.

Over the years, the stilling well has evolved into the sounding tube — rather than a float on a rope, the sounding tube sends an audio pulse down the tube and measures the time it takes for the pulse to bounce off the water surface and return to a sensor. Recently, NOAA has developed a new system that uses microwave radar to measure the water level. Microwave sensors don’t need a stilling well- they can be mounted to a structure that sits above the water. This is a massive advantage, because servicing the sensor is much easier if you don’t need to don a wetsuit and air tank. In the coming years, NOAA is planning to transition it’s acoustic measurement stations to this new microwave technology.

So, if you can measure sea level without ever touching the water, from how far away can you measure, exactly?

Send In The Satellites

As it turns out, you can take measurements from pretty far away — about 830 miles away, to be exact.

In 1992, an Ariane 4 rocket hurtled up from the Guiana Space Center to deliver the TOPEX/Poseidon satellite into orbit. The satellite carried an impressive array of instruments including two radar altimeters, a microwave radiometer, GPS receivers, and a laser retro-reflector array. The GPS system was able to pinpoint the satellite’s location to within an inch, and was the first system to demonstrate that GPS satellites could be used to locate another spacecraft rather than only terrestrial targets.

The TOPEX/Poseidon system was groundbreaking for a number of reasons. Not only was it able to measure sea level to an incredible degree of accuracy (1.5 inches), but it was the first mission to map the Earth’s tides. It mapped currents across the ocean, and gathered valuable data that improved our understanding of climate change, weather, and even the Earth’s gravitational field.

Although the satellite was shut down in 2006 after malfunctioning, its mission was taken over by Jason-1, which was launched in 2001 to supplement TOPEX/Poseidon’s measurements. Jason-2 followed, and in 2016 the mantle was taken up by Jason-3.

We know that these satellites do a great job of measuring the sea level, but what exactly are they measuring it against?

So Is Sea Level Zero? 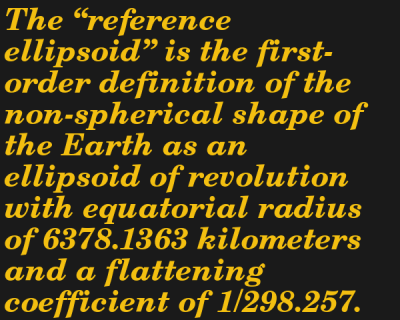 Well yes… and no. It depends on your reference point. If you look on any topographical map, you’ll notice that elevations are reported in height above (or occasionally, below) sea level. Pilots often report altitudes in AMSL, or Above Mean Sea Level. Mean sea level is obtained by time-averaging the still water level (SWL) to remove cyclical effect of daily tides. SWL is simply what can be measured with a tide gauge, the water level with sea motions such as wind waves smoothed out. This works well enough for measuring the elevation of things that aren’t, well, the ocean, but we run into a problem if we try to measure the ocean in terms of itself. This is where we need other references to measure against.

The satellite-based instruments report sea level with respect to the WGS-84 Reference Ellipsoid, defined by the TOPEX/Poseidon Data User’s Handbook as the “the first-order definition of the non-spherical shape of the Earth as an ellipsoid.” This is also the baseline GPS receivers use to convey elevation data. Another helpful reference surface is the geoid — the theoretical shape that the Earth’s ocean would make if it were free from the external influences of the Sun and other celestial bodies, only acted upon by the gravity and rotation of the Earth itself.

Does Mars Have a “Sea Level”?

This is all well and good for Earth with its vast oceans, but how is elevation measured on Mars (or other planets, for that matter) where there is no sea to reference?

If you want to measure a mountain on Mars, you better bring a barometer and a calculator. Zero elevation is defined as the isobar where the atmospheric pressure is equal to 610.5 Pa (for reference, “sea level” on earth has an atmospheric pressure of 101.5 kPa). Though seemingly selected at random, 610.5 Pa is the triple point of water on the red planet — that is, the pressure at which water can exist in its solid, liquid, and gaseous states simultaneously. From that, and a reference ellipsoid similar to the one we use for the Earth, the elevation of various geographic features is measured by laser altimeters affixed to an orbiting satellite such as the Mars Global Surveyor.

Let’s take a look at the Moon now, where the “atmospheric” pressure is effectively zero (okay, there’s some gas there but the pressure is around

Pa). The Mars method won’t work here, since there’s no atmosphere to speak of. To establish the Moon’s reference ellipsoid, scientists determined its average diameter and set that as the zero. The Lunar Reconnaissance Orbiter then can measure the relative altitude of the lunar surface with respect to that datum.

Back To The Beach

So, back to our initial quandary — what exactly is causing that receding shoreline you notice year after year? On average, the global sea level rises annually by about 0.14 inches, so while global warming is a very real concern you probably aren’t noticing its effects on the shoreline one year to the next. That leaves coastal erosion — the gradual removal of sand, rocks, and soil by the ocean. It’s a good thing then, if much of the coastline is so unstable, that we have tide houses and satellites to accurately track changes in the global sea level. That rock you tried to measure against is all but guaranteed to move.

34 thoughts on “Sea Level: How Do We Measure Global Ocean Levels And Do Rising Oceans Change That Benchmark?”