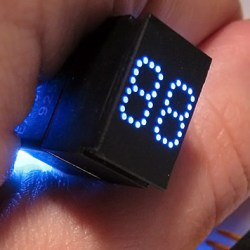 Back before LED technology came into its own, displays used incandescent bulbs. These vintage incandescent displays weren’t necessarily big; the Eaton 925H-C fiber optic display, for example, has numbers barely 7 mm tall and packs two of them into a tiny area. Of course, the depth of the display module itself is huge by today’s standards; those components have got to go somewhere, after all.

This particular device is, in [Industrial Alchemy]’s words, “[d]ripping with the spending excess that only a bottomless military budget can provide… the Eaton 925H-C may not be a practical device, but it is certainly an impressive one.”

The way the display works is this: individual incandescent bulbs light up fiber optic light guides, which terminate on the face of the display in small dots to make up a numerical display. With only fourteen bulbs, the dots we see here clearly aren’t individually addressable; the two digits are most likely broken up into seven segments each, with three dots making up each segment.

The sheer amount of workmanship in these displays is remarkable, and their design makes them easy to retrofit with LED technology instead of replacing the tiny incandescent lamps. In a stark contrast to all of the machined aluminum and gold plated contacts seen here in the Eaton 925H-C, take a look at this Soviet-era seven-segment incandescent display whose construction is far less sophisticated, but shows off its own clever engineering. We’ve also seen more modern DIY takes on the concept, using LED light sources and cured UV resin light pipes to get that vintage look to the displays.