Frank Riley and Harold Exline had similar inventions in the 1950s, though Teetor’s device won out. In 1958, the Chrysler Imperial, New Yorker, and Windsor offered a dash-mounted speed control. Cadillac renamed the device “cruise control” and the name stuck.

That was the year power door locks came out, too, and as you can tell, the public liked both of these inventions since we still have them today. In fact, the original design by Teetor didn’t actually lock the speed in, but just gave resistance to the gas pedal. Carmakers and consumers demanded the locking feature and Teetor finally consented.

From Flyball to Vacuum

A classic cruise control-equipped car will often have two cables running to the throttle body. One cable goes to your gas pedal and you intuitively know how that works. The other cable does the same thing but instead of a pedal, it is attached to a valve that uses a spring-loaded diaphragm or piston to control the cable — the cruise control servo. A valve draws vacuum or admits air into the chamber causing the diaphragm or piston to move the control cable. Since the cables are attached to each other, when the cruise control engages you can feel it in the gas pedal.

Of course, the actuator doesn’t have to use vacuum. You could as well use an RC servo, but in practice, it is nearly always a diaphragm or piston that has a vacuum on one side. The controller manages the vacuum via a valve that connects to the intake manifold or a dedicated pump along with a valve that bleeds air into the chamber. You can see a typical controller in the video below.

There are variations, of course. Some cars only have a single cable to the throttle body and combine input from the cruise control and gas pedal into that one cable. On newer cars, the throttle is likely operated by an electric motor anyway and a microprocessor determines the throttle position. In an older car, the vacuum setting would be in proportion to the difference between the set speed and the desired speed.

One common scheme was to have a single wheel that controls the cable to the throttle body. Above and below the wheel are two other wheels. The top wheel connects to the gas pedal and the bottom wheel connects to a motor. The bottom wheel is operated by the controller. In systems like this, a solenoid will lock the position of the wheel, and error signals from the controller will adjust the wheel position slightly to minimize the error using proportional control. For example, a pulse train from a magnetic sensor might be smoothed to a DC voltage and subtracted from a setpoint voltage to generate the error signal. 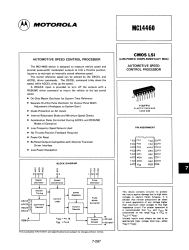 The Motorola MC14460 was an “automotive speed control processor” that was common in pre-microprocessor cars. We don’t know for sure what was on the inside, but given the chip-making capabilities of the day and the classification of the chip, we doubt it was a microcontroller internally.

The chip was marvelously economical on external circuits. It would drive two coils that control the throttle body. You can tell the output is made to drive a vacuum actuator as the outputs have names of VAC and VENT; one to open the vacuum valve and the other to admit air. The device also accepted a pulse stream input where 8000 pulses equated to one mile of travel. Another input detected the brake light signal.

Beyond that, there were three switches every modern driver knows: one to speed up, one to slow down, and one to resume speed. This IC made cruise control cheap to include on modern cars even though the computerization of cars eventually pushed it out of favor.

Very modern cars do more than just maintaining speed. Using radar above 70 GHz allows your car to see cars and obstacles ahead of you. The car can then adjust the speed to keep a safe following distance or even brake before you have a collision. In addition, some systems will notify you when the car ahead of you drives away, a nice feature if you have the bad habit of getting absorbed in your phone at stoplights.

We assume cars will eventually integrate with your phone. You’ll plug it in and set your speed from there. Or maybe it will all be brainwave-activated. Who knows?

Want to build your own cruise control? Peter and Jakub did and you can read about it in their scholarly paper. We feel bad we don’t use vacuum physics in our projects. Gas pumps also depend on suction.