Gravity Pumps of the Old Days

Many old gas pumps had manual pumps, a big glass tank at the top, and a siphon hose with a stopcock. If you wanted, say, 5 gallons, the attendant would pump the gas from the underground tank into the big glass tank that had measurement marks on it. Once it held the requisite amount, the hose would go into your gas tank, the attendant would open the stopcock, and gravity would do the rest.

Oddly, the gas pump predates the automobile. Sylvanus Bowser sold a pump as early as 1885 to sell kerosene that people used in lamps and stoves. In some parts of the world, a gas pump is sometimes called a bowser, although in the United States that term usually means a fuel truck for aircraft.

Obviously, this is a simple arrangement but ripe for improvement. But with the proliferation of pumping stations, and microcontrollers decades away, designers had to do some clever electromechanical work to make a functioning pump that could be used without skill or even by the customer themselves.

Mid-Grade: The Cocktail of the Filling Station

At the core of it all are large underground tanks that hold the gas. Trucks periodically stop by and refill these tanks. Fun fact. The Exxon truck and the Texaco truck get their gas at the same place that the Shell truck does. Either at the terminal or at the point of delivery, special additives are mixed in with the gas. That’s what makes one gas of the same octane rating different from the other brands.

The trucks usually have a few different compartments. One for regular gas, one for premium, and one for diesel. Some have more compartments. However, there is usually no mid-grade gas. When you buy midgrade gas, you are really just mixing regular and premium together right in the pump. This is accomplished with a blend valve. This is two valves connected in such a way that when one is open, the other one is closed in proportion so that the total flow is always equal to 100%. For example, if one valve is at 100% the other is always at 0%. But if you turn the first valve to 60%, the second valve will be at 40%. This allows the exact mix of two fuels into an intermediate grade. 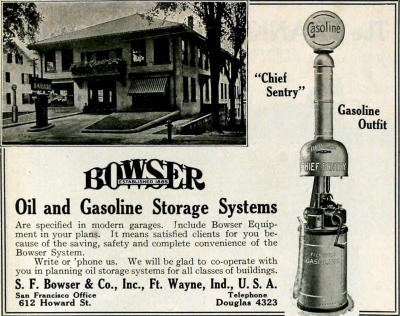 The additives are very important for modern engines. In 2004, automakers were concerned that some gas didn’t have enough detergents to prevent carbon buildup effectively. With higher compressions, direct injection, and other modern engine techniques, this is more important than ever. They formed the TOP TIER standard that gas producers could certify against. AAA found that using TOP TIER gas did produce fewer deposits in the engine than the minimum standard gas. Of course, brands that are not TOP TIER may be the same or better, they just aren’t tested.

The most amazing part of the gas pump is how it somehow knows — even with old tech — that the tank is full. The video below from [BrainStuff] shows a good diagram. There’s a small hole near the end of the nozzle that has its other end near a flexible diaphragm and a Venturi tube.

The Venturi effect causes a pressure drop when you compress a moving fluid. For example, if you squeeze a rubber tube in the middle, whatever is flowing through the tube will be at a lower pressure after the compressed part of the tube.

Before leaving the nozzle, a narrow part of the fuel path in the handle compresses the fuel, causing a lower pressure area after this bottleneck. The diaphragm inside the handle expands because ambient air pressure (which enters through the small “safety” tube hole at the tip of the spout) is higher than the low pressure fuel area created by the Venturi effect.

When the rising level of fuel blocks the hole at the tip, it causes the suction to stop, the diaphragm collapses, and the fuel valve springs shut with a loud click. No electronics at all. Just a flexible diaphragm, a tube, a spring, and some clever arrangement of all the parts.

Richard C. Corson originally came up with a version of the automatic shutoff in 1939 and received a patent in 1942. He had noticed workers had to fill barrels one at a time so as not to overfill and was inspired by the operation of a toilet to come up with an automatic valve.

Gasoline is difficult to meter accurately. There’s a diaphragm that constricts the flow to a known rate. The diaphragm also expands to slow down when you approach the point where the pump will shut off (for example, if you asked for $10 worth of gas). The metering itself is usually a 4-stroke piston flow meter that sends data to the onboard controller. In the old days, it just drove the little dials that showed the price. Piston flowmeters are very accurate. The video below from [Max Machinery] shows how they work.

Gas has a thermal expansion coefficient at 20C of over 4 times that of water. When you buy gas in bulk, the amount is usually compensated for temperature and some countries, like Canada, have done this at the retail level, too.

Next time you are pumping gas, you’ll have something to think about. There’s a lot of technology out there that someone is an expert on, but most of us just take it for granted. You have to admit, there’s probably a lot more to it than you would have thought.

If you are interested in the Venturi effect, you can make 3D printed Venturi tubes. If you thought about using your old car’s fuel pump to cool your PC, you might want to think again.