Crowdfunding hardware has its own unique challenges, and [Uri Shaked] wrote a fascinating report that goes into excellent detail about his experience bringing a crowdfunded hardware project to life. 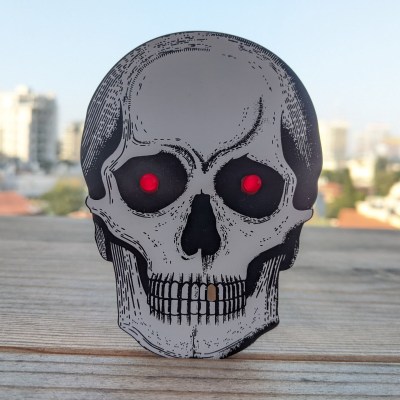 [Uri]’s project was The Skull CTF, an electronic hardware puzzle that came in the shape of a PCB skull, and his detailed look behind the scenes covers just about every angle, from original concept to final wrap-up, along with his thoughts and feedback at every stage. His project reached its funding goal, got manufactured and shipped, and in the end was a success.

[Uri] started with a working project, but beyond that was virtually a complete novice when it came to crowdfunding. He eventually settled on using Crowd Supply to make his idea happen, and his writeup explains in great detail every stage of that process, including dollar amounts. What’s great to see is that not only does [Uri] explain the steps and decisions involved, but explains the research that went into each, and how he feels each of them ended up working out.

The entire thing is worth a read, but [Uri] summarizes the experience of crowdfunding a hardware project thus: an excellent way to test out the demand for an idea and bring a product into existence, but be aware that unless a project is a runaway success it probably won’t be much of an income generator at that stage. It was a great learning experience, but involved a lot of time and effort on his part as well.

[Uri] really knows his stuff, and considering his skill at hunting down pesky bugs, it’s probably no surprise that this wasn’t his first hardware puzzle.

5 thoughts on “Successfully Crowdfunded Hardware: Everything Behind The Scenes”