I keep saying I need to stay away from auction sites, but then I wouldn’t have as much fodder for Hackaday, would I? As I write this, I’m waiting on a Dell AT101W, which will be my first keeb with Alps switches. Well, hopefully it has Alps SKCM salmon or black switches — according to Deskthority, it might have rubber domes. If it doesn’t keyboard, I will probably salvage the switches and build something more ergonomic. Either way, I’m thinking we need a post about Alps switches, because some people think they’re even better than Cherry MX switches.

Speaking of loyal Cherry MX enthusiasts, Maltrons are arguably the grandaddy of ergonomic keyboards, and the UK company that produce them have been around since the 1970s. Not only were they the first to use concave key wells, Maltron adapted their design and made some of the first one-handed and mouth-driven keyboards as well. They even have keyboards with built-in trackballs.

A two-handed, curved Maltron is definitely on my short list of holy grail contenders. Each one of these keyboards is painstakingly wired by hand, so they’re pretty expensive — even the ones that are already Stateside. $700 is hard to swallow for a keyboard that I might not like any more than the Kinesis Advantage that it inspired.

But the good news is that Maltron offers a DIY kit that’s customizable! They are selling everything a la carte from the injection-molded shell to the Teensy 2.0 to the key caps, which come with either lasered-on legends or no legends at all. We don’t see anything about an instruction manual, so you’re on your own as far as wiring it up.

If all I wanted was the shell and the trackball unit, that’s only £120 plus shipping and VAT. But unless I can find a kit distributor in the States, the shipping charges of these two pieces alone might cloud the allure of building one myself. I’ll have to mull it over and get a shipping quote.

One-Handed Keyboards Can Be DIY, Too

We’re not sure if one-armed writer [Britt H. Young] has ever tried a Maltron, but her quest for the perfect mechanical keyboard is a good read either way.

[Britt] begins by recalling the federal safety-orange keyboard skin with the one-handed Dvorak layout that brought so much negative attention in elementary school typing class, so perhaps the one-handed Maltron is too clinical a solution. Between the curved key well and the ortholinear layout, it’s a lot to adapt to. Bad memories aside, [Britt] has always been fond of loud keyboards and longed to clack like back in the day.

Fortunately it’s 2021, and there are a ton of options out there for building your own keyboard. Some keycap profiles do not play nicely with the key swapping that [Britt] requires, but DSAs do. For that very reason, [Britt] settled on a Tofu65 board with Kailh whites and these beautiful DSA keycaps shown here. Happy clacking, [Britt]!

Believe it or not, this is [loopsbellart]’s first build, and they’re already playing around with what-ifs. What if every key was on the home row, or at least as close to it as possible? That’s the idea behind the Grabbity Gloves.

This cyberpunk beauty reminds us of the lalboard, the DataHand keyboard that inspired it, and the equally minimalist Squeezebox. But in this case, the fingers only push and pull and don’t also press down. We’re not sure, but that might be for the better. We’ll just have to build one and find out for ourselves, taking [loopsbellart]’s lead to put lighter springs in at least the forward-actuated switches.

The Grabbity Gloves are completely wireless thanks to a pair of nRF52840s. Their main brain is a BlueMacro840 running BlueMicro firmware, but the ‘840 is pin-compatible with the Arduino Pro Micro if you want to run QMK instead. Although [loopsbellart] isn’t planning to sell these, they are willing to release the STL files. Here’s a gif of the Grabbity Gloves in action.

Long before the idea of concave key arrangements came along, there was this convex typewriter that looks like a pin cushion or a dull porcupine. The type bars (if you can call them that) strike at a right angle to the orientation of the keyboard. That’s right, it types sideways, and early models blocked the user’s view of the results. The paper advances in a gentle arc via electromagnet as you fill up the page. Later versions used a mechanical escapement.

The Malling-Hansen Writing Ball was the first commercially-sold typewriter, beating Scholes & Glidden’s Remington I (featuring the QWERTY layout) to market by a few years. The Ball was invented by the reverend Rasmus Hans Malling Johan Hansen, a teacher and director at an institute for the deaf and mute in Copenhagen.

Hansen wanted his students to be able to speak with their fingers, and thus created the Ball to be easy to use quickly. Some other types were made, including a model for telegraphs, one for cryptographers, and one for the blind. Only 200 or so of these were produced, and about 40 are still around today.

Nietzsche Was on the Ball

“the Writing Ball is a thing like me: made of iron, yet easily twisted on journeys.

Patience and tact are required in abundance, as well as fine fingers to use us.”

When Friedrich Nietzsche’s eyesight began to fail, writing the normal way would give him terrible headaches. According to letters written to his sister, Nietzsche was in direct contact with Rasmus Hansen and had the latest and greatest version of the Writing Ball sent to him in 1882.

Unfortunately, sources suggest that he couldn’t use it because it was damaged in transit, and the repairman he took it to only damaged it further. He must have had it repaired or replaced at some point, because he was enamored by it enough to write a poem about the thing.

If you want to watch one of these clack, you’re in luck. One [Felix Herbst] modeled the Writing Ball and made an animation that shows it in action, which you can see below. [Felix] also made an interactive version that lets you type letters in the original font and send or print them, but it seems to be broken. 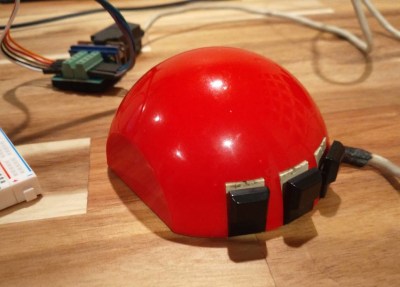 Yes, I know — this is Keebin’ and not Mousin’, but the input-related hacks have been mouse-heavy since the last one of these. And besides, the buttons on this old Depraz mouse look clicky and inviting and a little bit like Kailh chocs.

Now that [John Floren] has built a USB adapter for this lovely mouse using an Arduino Pro Micro, he reports a pleasant hand-feel and a satisfying clickiness to the buttons. You can hear them toward the end of the short demo video.

14 thoughts on “Keebin’ With Kristina: The One With The Grabbity Gloves”