Though some of us are heavily assisted by smart phone apps and delivery, humans don’t need GPS to find food. We know where the fridge is. The grocery store. The drive-thru. And we don’t really need a map to find shelter, in the sense that shelter is easily identifiable in a storm. You might say that our most important navigation skills are innate, at least when we’re within our normal environment. Drop us in another city and we can probably still identify viable overhangs, cafes, and food stalls.

The question is, do these navigational skills vary by species or environment? Or are the tools necessary to forage for food, meet mates, and seek shelter more universal? To test the waters of this question, Israeli researchers built a robot car and taught six fish to navigate successfully toward a target with a food reward. This experiment is one of domain transfer methodology, which is the exploration of whether a species can perform tasks outside its natural environment. Think of all the preparation that went into Vostok and Project Mercury.

The Drive for Food 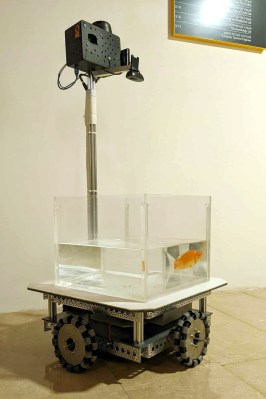 The researchers were inspired by a another team that taught rodents and dogs to reach a target via automated vehicle, and a different contraption called Fish on Wheels that serves this same purpose. Essentially, this Fish Operated Vehicle (FOV) is a tank on a standard-looking robotic platform that’s outfitted with a top-down camera. The fish’s movements are tracked and translated to driving commands that wheel the platform around.

Here’s what we know about the FOV: the frame is 40 cm x 40 cm x 19 cm, and it moves around on four omni wheels, each of which is driven by a brushed DC motor. The acrylic tank is 35 cm x 35 cm x 28 cm and was filled with 15 cm of water. Enough for the fish, but not so much that it sloshed around and spilled out.

It only took ‘several’ days of training before the fish successfully navigated to their food target from different starting points in the room. Surprisingly, they were not fooled by false targets, nor were they dismayed when they ran the tank into walls. The team also showed that the fish used several types of cues to drive the tank, including the color and location of the target.

Is the ability to navigate universal to all species, independent of environment? This study seems to suggest it, though the paper itself is only available in snippets without payment or institutional access. You can see a video of the (FOV) in action below.

This isn’t the first time we’ve seen animals being smart, or even the first instance of fish behind the wheel. Some animals are even soothed by robotic platforms underneath them. Most recently, we learned about some rats that learned to play Doom in an automated VR arena by running atop a sphere that works like an upside-down mouse.

Some might argue that there’s no utility in these experiments. If it’s results you want, then use pigeons to guide your missiles, or magpies to muster messes of Marlboros.

Thanks for the tip, [chaosbc]!

19 thoughts on ““So Long,” Said All The Tank-Driving Fish”