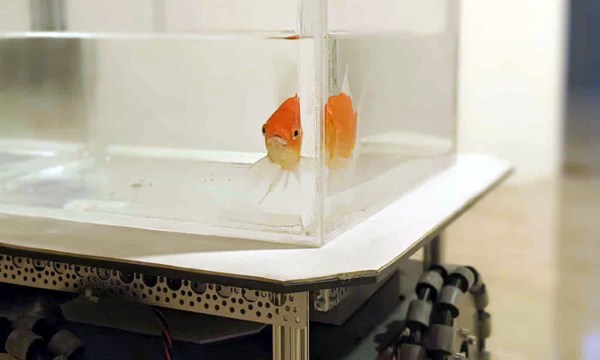 Though some of us are heavily assisted by smart phone apps and delivery, humans don’t need GPS to find food. We know where the fridge is. The grocery store. The drive-thru. And we don’t really need a map to find shelter, in the sense that shelter is easily identifiable in a storm. You might say that our most important navigation skills are innate, at least when we’re within our normal environment. Drop us in another city and we can probably still identify viable overhangs, cafes, and food stalls.

The question is, do these navigational skills vary by species or environment? Or are the tools necessary to forage for food, meet mates, and seek shelter more universal? To test the waters of this question, Israeli researchers built a robot car and taught six fish to navigate successfully toward a target with a food reward. This experiment is one of domain transfer methodology, which is the exploration of whether a species can perform tasks outside its natural environment. Think of all the preparation that went into Vostok and Project Mercury.

END_OF_DOCUMENT_TOKEN_TO_BE_REPLACED 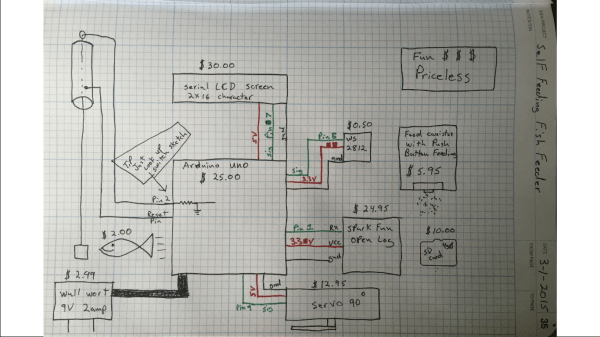 We’ve featured quite a few aquarium and fish feeder hacks on our blog. [RoboPandaPDX] thought of taking it up a notch and make an interactive fish feeder. He built a Fish feeder that train’s them to feed themselves.

A copper bar hangs from the middle of a metal cylinder – much like a bell. The end of the bar has a fish lure. When a fish pushes the lure, the copper bar touches the metal cylinder and  closes the circuit. This signal goes to an Arduino. To catch the attention of the fishes and to “teach” them, an RGB LED is used. The fish need to figure out that the feeder will dispense food only when the LED is ON and the Lure is pushed. If the fish figure that out, and push the lure when the LED is on, a servo is activated which pushes the feeder to deliver 1 unit of fish food. While at it, he added a couple of bells and whistles. A buzzer to indicate when the Lure switch is closed and a 2 line LCD shows how many times the switch has been activated and how long the program has been running.

A Sparkfun  open logger stores the hit count and the minutes and seconds of the hit for data analysis later on. The good news is that it seems to be working. The current code activates the feeder for 30 to 60 minutes every day, which is indicated by the LED. At the end of 9 days,  [RoboPandaPDX] found that the goldfish would hit the Lure when the LED turned on, and then turn around to face where the feeder would dispense food in to the tank. His next plan is to put up some obstacles along the path to see if the fish learn some new tricks. His schematic looks a little iffy (the Lure switch is connected to the RST pin of the Arduino), and it seems he cannot remember why he ever did that. He’s happy that it works though, but we’re sure that’s not the right way to wire it up.

[RoboPandaPDX] is looking for suggestions on improving his interactive feeder, so if you have any, do add them in the comments below.

If you need some more fish feeder ideas, check out this and this that we blogged about earlier.