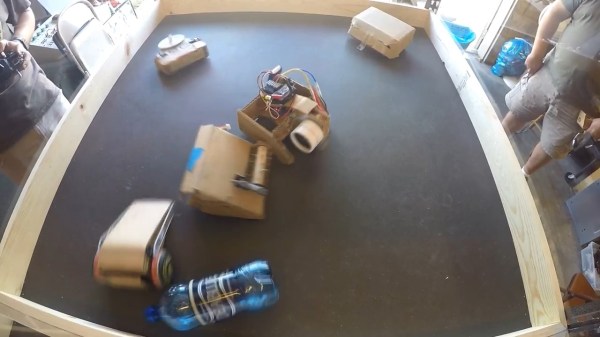 Fighting robots are even more awesome than regular robots. But it’s hard for us to imagine tossing all that money (not to mention blood, sweat and tears) into a bot and then watching it get shredded. The folks at Columbia Gadget Works, a Columbia, MO hackerspace had the solution: make the robots out of cardboard.

The coolest thing about building your robots out of cardboard and hot glue is that it’s cheap, but if they’re going to be a modest scale, they can still be fairly strong, quick to repair, and you’re probably going to be able to scrounge all the parts out after a brutal defeat. In short, it’s a great idea for a hackerspace event.

END_OF_DOCUMENT_TOKEN_TO_BE_REPLACED Ever wonder what’s under the hood with a competitive battle robot like this one? It’s usually a big secret as teams don’t care to give their competition any help. But [AlexHrn] decided not only to give us a peek, but also shows us his step-by-step build process for Phoenix, the 30 pound flipping battle robot.

[Alex] has already seen quite a bit of success with a different robot, but he couldn’t quite beat another competitor whose bot included a flipping arm which threw its competition across the ring. So [Alex] decided to join in on the technique with this build. The arm itself uses air pressure to exert a large force very quickly. Inside, a paintball gun tank powers the pneumatic ram. It looks like this tank is charged up before the competition and only gets about 12 shots before it’s depleted. You can see the power in the quick clip after the break.

For locomotion the unit uses a couple of cordless drill motors. These have a fairly high RPM and work well when powered by batteries.